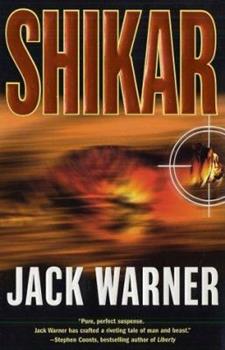 "Shikar" marks the spectacular debut of Jack Warner. Totally absorbing, it is a thriller of verve, accomplishment, tension, and imaginative power. This is the kind of story that keeps us awake and reading into the early morning hours, makes us miss our stop, forces us to be late for appointments. "Shikar" pits Grady Brickhouse, sheriff of Harte County, Georgia, against an unlikely but fearsome opponent-a full-grown Bengal tiger that has somehow found...

One of the best damn books I've ever read

Published by Thriftbooks.com User , 18 years ago
Great, great book. I can't think of anything that could have been better. Bravo.

Published by Thriftbooks.com User , 18 years ago
Finished Shikar in three gulps- the last going till three one morning. I loved it; but then I am a recently retired policeman, have had a lot of professional and personal contact with reporters, know many real Georgia sheriff's and lastly I appreciate the awesome raw power of wild animals. We have lost our respect for animals through Disney, zoos and the Discovery Channel, but Warner was able to capture what happens when a wild animal gets loose among us. In my career as a cop I encountered several smart and resilient but troubled children from dysfunctional families and was always amazed at their survival skills and intellect given their home lives. Warner has obviously encountered such a child too, and used his experience to create one of the the main characters. I hope to get Shikar signed when Mr. Warner comes to my local book store (Chapter 11) in Atlanta next week, then put it away for a re-read this November when hiking the foothills of the Appalachian mountains. Jack Warner has hit his target, and I thank him for creating a thoughtful and gripping tale. LA

There are few "can't put down" books. This is one of them.

Published by Thriftbooks.com User , 18 years ago
My copy of Shikar arrived a few days ago and I planned to spend the weekend reading it. I was wrong. I read it straight through. I don't know if Jack Warner has another novel in him, but he already has accomplished more with this one than most who make their living at it.I only hope Hollywood doesn't ruin it when they make the movie, which I find inconceivable will not be made. Especially since it would seem to be the right role at the right time for Sean Connery as Jim Graham.One can only suppose it was all those years writing with such skill about reality that enabled him to craft a novel with as much horror as any Stephen King could write, along with a full spectrum of humanity's various specimens, without taking the easy route of creating either monsters or caricatures. Both people and tiger are astoundingly real.This is not "Jaws" in the Georgia woods. It is the intriguing tale of both animal and man, out of their elements yet still driven to do what they do naturally. Warner's tiger is not some mindless evil, but an almost sympathetic character in his own right. Almost, because you can never break away from what he is doing, must do, to survive. Here's hoping Shikar becomes the runaway bestseller of the summer, as it should. Then I can tell people it was written by the man who, by example during our years together in United Press International's Atlanta newscenter, taught me far more than I ever learned.Helluva job.

Published by Thriftbooks.com User , 18 years ago
On my own, I never would have read this book. However, my husband insisted, and I'm glad he did. To my surprise, I loved it. Hard to put down, which I haven't experienced in years with a book. Highly recommended.

Published by Thriftbooks.com User , 18 years ago
When I read this book, I couldn't put it down. When I was able to break away, I spent the whole time thinking about the story and characters. It made me afraid to go hiking in the woods behind my house! Well written, action-filled, great story. I want more! I'm calling friends and recommending it - something I rarely do, but this book is worth it. If you want an exciting book to read, this is it.
Copyright © 2022 Thriftbooks.com Terms of Use | Privacy Policy | Do Not Sell My Personal Information | Accessibility Statement
ThriftBooks® and the ThriftBooks® logo are registered trademarks of Thrift Books Global, LLC