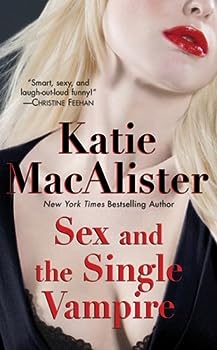 Sex and the Single Vampire (Dark Ones)

This description may be from another edition of this product. A bad-boy vampire and a flighty summoner attempt to scare up true love on the streets of London.

Published by Thriftbooks.com User , 17 years ago
Although I found myself anxiously awaiting the release of "Sex and the Single Vampire" after reading "A Girl's Guide to Vampires", at the same time I was a little annoyed because I loved Christian in the previous story and I wanted to him to end up with Joy his "Beloved". So of course when I began reading "Sex and the Single Vampire" I started to find fault with the writing, the storyline and even the characters. But Ms. MacAlister convinced me I was wrong and "Sex and the Single Vampire" is a more than worthy follow-up novel. I loved every minute of it.This story revolves around Allegra who is a special woman who has survived some of the things in her life that most of us could not imagine going through. Allegra happens to be a summoner of spirits who until she arrives in London hasn't managed to summon anything and her job is on the line unless she can produce some proof of her supposed abilities, that is until Allegra ends up going to a C. J. Dante a.k.a. "Christian" book signing arranged by no other than Christian's previously thought "Beloved" Joy and her sidekick Roxy. Allegra actually meets the man who will eventually change her entire world. Although Christian is everything she despises in a man (he is controlling and arrogant to top it off) but despite her distrust of Christian, she is drawn to him in a way she's never been drawn to another man.Of course Christian doesn't believe Allegra is his "Beloved" since he's been wrong before and because she is everything a "Beloved" shouldn't be, Allegra is self-sufficient and completely independent but curiosity gets the best of him and time proves them both wrong because when the Christian and Allegra are finally united they become a very powerful duo and can face down whatever trouble comes their way.I'm so glad that I did not allow my initial reaction to this novel get the best of me because I would have missed out on another wonderful story. By the time I finished this novel I knew Christian and Allegra were truly destined to be together and now Ms. MacAlister has me once again "anxiously" awaiting her next release. Don't miss this opportunity to read a simply amazing story proving how the power of love and trust when tested can indeed conquer all.

Published by Thriftbooks.com User , 17 years ago
I had a little argument with myself while I was waiting for a presciption to be filled in the store. Was I going to buy this book, or was I not? On the one hand, I wasn't nuts about the first book in the series. It left way too many unanswered questions at the end for my liking. It also left Christian, who was a really nice guy, unhappy and alone at the end of the book. Also, to be quite honest, I found Joy to be rather annoying.On the other hand, I really wanted to see if Katie could wrap up some of those loose ends from the first book, and most importantly, if Christian finally found his Beloved. In the end, the impulse shopper in me won out and I bought the book. I have never been so glad I bought something in my entire life!! The difference between this book and the first one is like night and day. Katie draws you in from the very first page with all of her quirky, but lovable, characters. I found myself laughing out loud, cheering the characters on, and eager to see what happened next all the way to the end. In fact, I'd have to say that was the only disappointing thing about this book: it ended way too soon. I'll be eagerly awaiting Sebastian and Noelle's story, which I sincerely hope will be next in what is sure to become a great series.

Ohhh Christian - what a hero!!

Published by Thriftbooks.com User , 17 years ago
Katie's brilliant, witty writing continues to entertain us in her second paranormal romance, for which all of her fans have been anxiously awaiting. She does not disappoint. As usual, her heroine is quirky and not-so-perfect, making us all feel as if we too could have our very own hot and sexy vampire! The story is filled with several endearing, and sometimes annoying, ghosts summoned by Allegra. They are so laughable that they almost steal a few scenes. But it is our hero Dark One, the incomparable Christian for whom we have all been waiting, who is the true star for me. Romantic, gorgeous,as domineering as we who love Alpha Males want him to be, yet compassionate and flexible for his also domineering Beloved. Once again, Katie has delivered a delightful, sexy romp! Keep those Dark Ones coming!

Published by Thriftbooks.com User , 17 years ago
If you liked 'A Girl's Guide To Vampires' you're going to LOVE 'Sex and The Single Vampire'. For all of you who felt for Christian, worry no more. Allegra is his perfect match. The book is fast-paced, action-packed, sexy and funny. Katie Macalister has truly outdone herself. (And yes I even laughed out loud.) The only bad thing I can say about this book is that it had to end. This one is a keeper, so hurry up and get a copy.

Do you like funny, hot, vampire books? This ones for you....

Published by Thriftbooks.com User , 17 years ago
Katie has written a hilariously funny romance between the incredibly hunky Christian Dante, famous author of vampire novels and Allegra Telford, a somewhat unsuccessful summoner. Christian is on a book signing tour and to search for his Beloved, his friends figured if he expanded his search outside of Monrovia he'd have a better chance of finding "her". Allegra on the other hand is trying to summon her first spirit and also promised her best friend she'd get a book signed by Christian while he was in London. Through the book Allegra "hones" her summoning skills, she manages to first summon a three legged cat, tries to release it , it doesn't want to go. Next comes the cat's owner, a matchmaking, busybody old lady, Esme, she doesn't want to be released either. Allegra goes on to summon several more spirits that don't want to be returned, including Alis, an ex-housekeeper who only speaks Welsh and yells at all the antiques and expensive vases in the house. She must be trying to get her revenge on the things that made her previous life miserable. It must frustrate her because when she tries to destroy things her ghost hand just passes right through them. Christian can't believe that Allegra is his Beloved, after all he always thought his one and only would be a docile, amenable kind a woman, not like the fighter Allegra is. She will let nothing stand in her way to protect someone she loves and that is precisely what Christian needs. Another great trait we have come to expect in a "Katie" book is, the heroine isn't the "prefect " woman, (like who of us are?). She has some physical flaws, the secondary characters are all quirky, but the hero is, as always perfect, at least in the eyes of the heroine. It's a great read, fun read, especially if you like to laugh out loud.
Copyright © 2020 Thriftbooks.com Terms of Use | Privacy Policy | Do Not Sell My Personal Information | Accessibility Statement
ThriftBooks® and the ThriftBooks® logo are registered trademarks of Thrift Books Global, LLC