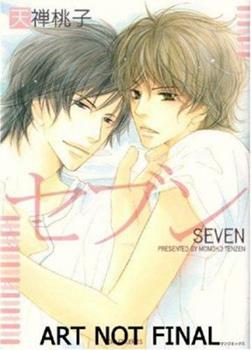 Nana has no memory of his childhood earlier than age 12 when a store owner took him in and gave him a name that meant "no-name" in Japanese. Mitsuha is on a quest to find a missing childhood friend. The two meet when Mitsuha ends up crashing at Nana's place at the insistence of a mutual friend. At first Nana loathes the very existence of Mitsuha. However, he gradually warms up to his sincerity and kindness and finds happiness in awakening beside him...

Beautiful art and very touching story: if you're a BL fan, don't miss it!

Published by Thriftbooks.com User , 12 years ago
It's a beautiful romantic story, somewhat sad at times, but overall happy and satisfying. I really liked the art: it's tender and gentle, just as the cover shows. Yaoi content (i.e., the presence of explicit sex scenes) is low (it's rated 16+), but it's there (passionate kissing, hugging, etc, and the rest (though it's not really shown) one can easily guess). But the story is so beautifully flawless that even if you like more "hardcore" yaoi (but still like a good story once in a while), I highly recommend it. However, if you're really into only "hard" yaoi no-matter-what, then you might be disappointed. Overall, this is by far my favorite book from this manga-ka. Some readers found this story "confusing", but to me it certainly wasn't. There are two couples in the book. The uke in the central couple is a boy of high-school age (looks like 17-18 years old or so), an orphan who suffered fire and then amnesia while he was about 12-years old. He got picked up by a dubious middle-age bar owner. Not much is shown or said, but the way I read it: there's a hint that the bar owner molested the boy while that one was really young. Nothing is shown, more of a subtle hint there and there. The owner eventually dies of some brain disease and the boy goes on living, though he's obviously deeply traumatized (he cannot sleep alone, etc). There's much more going on after that (obviously, there will be "true love found" in this story:)), but I don't want to give too many plot spoilers. The second couple is closely related to the first. I wish there would be some continuation / second volume on them, as the story does feel a bit unfinished (or maybe I just liked it so much, that I want more?). Despite dark pasts of the characters, the book ends on a positive note. Overall, it's an outstanding "boys-love" classic.

Published by Thriftbooks.com User , 12 years ago
Momoko Tenzen's Seven (Yaoi) is two stories, the title story, which is told in two parts, and a related story in between. Nana has only the memories of his life since he was twelve, when he was taken in by a store owner who was both kind and cruel; that has been Nana's life since then, kindness, unthinking cruelty, and being used. Mitsuha, a vagabond and writer, wanders into his life and offers him something more: kindness, yes, but also genuine concern, and hope. In the second part of the story, the shoe is on the other foot: Mitsuha leaves Nana to explore an island while he goes off to take care of some business; Nana learns the joy of working in the sun, the warmth of human companionship -- he learns to laugh. When Mitsuha returns, he realizes that he can't go on without finding the courage to admit that he needs someone else. The center story, "Within Plain Sight," concerns two brothers, one of whom is adopted. They realize that not only do they love each other as more than brothers, but that each draws strength from the other. I found both stories, especially the first part of "Seven," to be subtle and poetic and remarkably strong, several steps beyond the typical romantic yaoi plotlines. The drawing is in perfect keeping with this, spare, elegant, and expressive, with a sketchy quality that brings a spontaneous feeling to the images. This is one of the best yaoi I've read, on all counts.

one of the better yaoi i've read lately

Published by Thriftbooks.com User , 13 years ago
i prefer yaoi that have more emotion and characterization, so i enjoyed this one. the plots for the most part aren't just a retread of the usual formula, and the first story, which is about two people who are looking for something and find each other, is touching. the second story about two brothers is a bit more typical, but still has some nice moments and a nice plot twist. and the third story is a nice postscript to the first story. overall the story was novel enough and written well enough to keep me interested. the artwork is fine: it won't blow you away, but i enjoyed it. not much sex though, so if you're looking for that you should look elsewhere.

Published by Thriftbooks.com User , 14 years ago
I thoroughly enjoyed this manga. The art is simple, but the emotions of the characters shine through beautifully, and the writing makes Nana, Mitsuha, and the others come alive. I didn't find it confusing at all, and I loved the way the story ties together. So many mangas have one title story, with as much as half the book consisting of fillers. "Seven" isn't like that. Different stories, yes, but all related to strengthen the whole.

Published by Thriftbooks.com User , 14 years ago
Two stories here which are told in 3 chapters. They are separate stories yet are connected in a special way. The first story of the same title features 2 lonely characters, Mitsuha and Nana who are orphans. Mitsuha is a vagabond writer searching for his sole younger brother who has been adopted by another family more than 15 years ago. Mitsuha is afraid to commit to or devote himself to anyone. Nana works in a bar and has no memory of his childhood, not even his real age and his name means "no name". Nana is insecure and vulnerable and has one fling after another just to avoid being lonely at night. One could not help but feel for this sad young man. There is a bitter sweetness to their love story and the ending at the end of Chapter 1 does leave me wanting more. Fortunately the mangaka does provide us with an update on their relationship in the last chapter, which is a closure for "sappy" old me. The second story, "within plain view" is love between 2 brothers with a nice twist. The mangaka did a good job with the emotions build up here, from mere brotherly love to acknowledgement that their love is so much more and the courage to embrace it. Both stories are told with a sensitivity which prompts me to reread it a second time. This mangaka's words are simple but emotionally effective. Her artwork may not be the best out there but her story telling skill more than make up for it.
Copyright © 2020 Thriftbooks.com Terms of Use | Privacy Policy | Do Not Sell My Personal Information | Accessibility Statement
ThriftBooks® and the ThriftBooks® logo are registered trademarks of Thrift Books Global, LLC