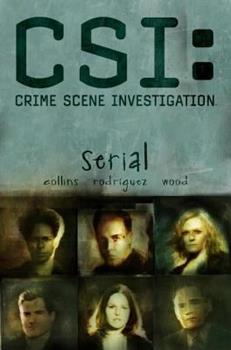 In modern Las Vegas, a Jack the Ripper copycat terrorizes the city Written by Max Allan Collins (The Road to Perdition), this volume captures all the gritty realism of the TV show and keeps readers guessing to the very last page.

Published by Thriftbooks.com User , 13 years ago
It's in good condition just like it said it would be and it shipped in time.

Published by Thriftbooks.com User , 17 years ago
I have been reluctant to acquire any of the CSI books because I was concerned that the authors would be unable to match the style of the television series. I was quite pleased that Max Allan Collins was able to write an intriguing story to the art of Gabriel Rodriguez and Ashley Wood. We have seen variations on this story before. A serial killer is on the loose who is killing women in the style of Jack the Ripper. There is a Rippermania convention in Las Vegas with too many people who know too much about Jack the Ripper, and it appears that the killer is trying to duplicate Jack's crimes precisely. This story goes into extensive detail regarding the original crimes of Jack the Ripper. I am unfamiliar with the details of Jack's legacy, so I must accept that the facts as stated by the CSI team must have some historical accuracy. If so, it appears that Max Collins must have done a lot of research. The story follows not only the mystery of the serial killer, but there is a second murder to intrigue the reader, similar to the style of the television series. There is some evidence that the second murder has some relationship to the serial killings. I personally enjoyed the story. While another reviewer stated they knew who the killer was immediately, I only had an idea who the killer might be until the team had eliminated the suspects sufficiently to allow me to guess more accurately. When it comes to mysteries such as this, you may guess correctly, but someone else, like me, may not. If you do guess the killers correctly, congratulations! However, I would rather follow the team and see how they scientifically find the killer rather than guessing, which leads to mistrials and dismissals. I was somewhat disappointed with the artwork. Some of the art was good. In other places the artwork was poor, with the faces of the CSI team out of proportion. When the artists changed to a more highly conceptual form to illustrate in a more artistic style the results were often interesting. However, on average the artwork was mediocre. Of course, I read the story for the story and not for the artwork, though better artwork would have enhanced the story. If you need more of a CSI fix than three television shows and their numerous syndicated reruns can give you, then give this book a chance. I thought the story was intriguing. The artwork is only fair, so ignore the artwork for the story. If you tend to guess the solutions to mysteries accurately, you may also want to pass this book by. I will probably re-read the story because I liked it, but I will also be watching for clues to the killer, now that I know who he or she is.

Published by Thriftbooks.com User , 18 years ago
I've been a fan of Max Allan Collins for some time. He's a terrific mystery writer -- both prose novels and comic books.His talent really shines with this unique graphic novel. The mystery is an interesting one and his characterization is faithful to the show. And for anyone who knows the lore of Jack the Ripper, you'll discover that so does Collins.But what really surprised me was the quality of the art. Using 2 artists was a clever idea that really makes you feel like you're watching the tv show. I recommend this one to anyone who loves CSI or a well told (and well drawn) mystery.
Trustpilot
Copyright © 2022 Thriftbooks.com Terms of Use | Privacy Policy | Do Not Sell My Personal Information | Accessibility Statement
ThriftBooks® and the ThriftBooks® logo are registered trademarks of Thrift Books Global, LLC