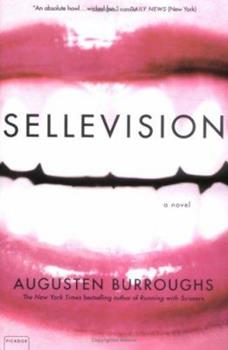 Darkly funny and gleefully mean-spirited, Sellevision explores greed, obsession and third tier celebrity, in the world of a fictional home shopping network. Welcome to the troubled world of Sellevision, America's premier retail broadcasting network. When Max Andrews, the much-loved and handsome (lonely and gay) host of "Slumber Sunday Sundown" accidentally exposes himself in front of twenty million kids and their parents during a "Toys for Tots" segment,...

Lovin' Burroughs' Writing, and this one made me laugh

Published by Thriftbooks.com User , 15 years ago
Of the other AB books I've read (both memoirs) they claimed to be funny, but they hit a bit close to home, so I didn't really laugh, but still had to read them. Couldn't put a single work of his down without a fight(at times had to go to work). Sellevision, on more than one occasion had me laughing out loud. What a treat! If you like Augusten's work you'll not be disappointed with this until you finish it and your longing for more to read!!

A dark and clever farce!

Published by Thriftbooks.com User , 19 years ago
No book has made me laugh so much since Terry Southern's Candy. Sellevision, like Candy, is a clever and disarming satire that borders toward a parody. This novel has the sort of lowbrow humor that will make you roar with laughter and loathe the characters and situations at the same time.Sellevision is a more upscale version of QVC. The hosts are third-tier celebrities who would backstab their way to the top. During the course of the year, the channel and its hosts undergo various changes. Max, the sweet and handsome gay host of "Toys for Tots," a children's segment, loses his job when he accidentally exposes himself during the aforementioned program. He hadn't anticipated the struggle to regain his career and reputation that he ends up enduring. On the other hand, Peggy Jean Smythe, one of the channel's most popular hosts, has the perfect life. That is until she receives sinister E-mails from an obsessed fan. The other hosts have skeletons in their dressing rooms as well. Will Leigh be able to end the courtship with her married boss? Will Bebe's shopaholism stand in the way of true love? Will Trish Mission finally become Sellevision's diva? Will Peggy Jean's husband be able to resist his desire for the beautiful - not to mention jailbait - babysitter? There are some hilarious twists throughout the novel.As mentioned earlier, some of the goofball situations that occur in Sellevision are more of a parody about the ubiquitous home shopping networks that have become so popular over the years. This is one of the cleverest satirical novels out there. If you're in the bargain for a laugh-a-minute farce, I suggest that you give this dark comedy a whirl.

Have We Got A Deal For You...229 Pages of Hilarity

Published by Thriftbooks.com User , 22 years ago
This marvelously wicked and well written novel was a definite treat to read.Augusten Burroughs will hook you with the very first sentence! What follows is a riotous behind-the-scenes romp through the world of the Sellevision Retail Broadcasting Network. Witness egos clashing on a regular basis! Laugh as the on air talent creatively try to back-stab one another! This entertaining cast of characters are constantly jockeying for a better and more lucrative spot in the limelight, all the while trying to sell you and your family a Princess Diana key fob. It's a devilish mix of "Soapdish" and "American Beauty"!This novel is a delight! Each and every character is well crafted. I still can't find one I like over another. Readers get a look at each of their personal lives, as well as their on-air ones. All of which are screwed up to various degrees! Hilariously so!Of all the cast, Bebe Friedman is the proverbial rat in charge of the cheese. Not only is she one of Sellevision's most popular hosts; but, she also has an obsessive compulsive thing for shopping. Her $19,287.64 American Express bill is a testament to that fact. Plus, as she surmises, she knows that there will be someone somewhere in her life that will love a roulette wheel for a Christmas gift."Sellevision" is fast, sharp and funny. For his first novel, Augusten Burroughs does a fantastic job of entertaining the reader! I look forward to his next work!

Published by Thriftbooks.com User , 22 years ago
I haven't laughed out loud so much since I read FEAR AND LOATHING IN LAS VEGAS. Burroughs captures the lunacy of a cumsumer culture with the adroitness of a much more seasoned author. His vantage point is one of unhampered voyeurist....it's like Survivor for QVC, Even if you've never watched the ubiquitous home shopping networks and infomercials that prowl the cable system, you will be uncontrollably amused by his story. I read it in two sittings and alarmed people around me on the subway with raucous outbursts of laughter. do not eat or drink while reading this book -- you don't wait to spray coffee over your copy of what may be , to date, the purely and unapoligetically funniest book of the new millenium....
Trustpilot
Copyright © 2022 Thriftbooks.com Terms of Use | Privacy Policy | Do Not Sell or Share My Personal Information | Accessibility Statement
ThriftBooks® and the ThriftBooks® logo are registered trademarks of Thrift Books Global, LLC