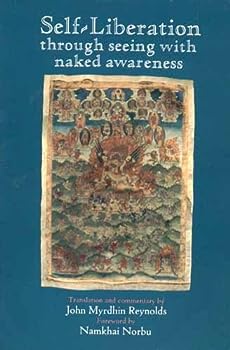 Self-Liberation Through Seeing With Naked Awareness (English and Tibetan Edition)

"A text belonging to the same cycle as The Tibetan Book of the Dead , this instruction on the method of self-liberation presents the essence of Dzogchen, The Great Perfection , regarded in Tibet as... This description may be from another edition of this product.

Published by Thriftbooks.com User , 15 years ago
There are multiple viewpoints about the utility of including the Evans-Wetz controversy. However, reader, please be aware that this is actually an Apendix and not the main part of the book. Therefore, the author/scholar has no obligation to the reader, imo, as to whether to include or not. As an aside, I found the appendix quite interesting. As to the main part of the book; ASTOUNDING. Some of the best, most lucid, crystal clear instruction on the topic.

Very Best Of Its Kind

Published by Thriftbooks.com User , 16 years ago
Of all the myriad Dzogchen texts I've read, this is the very best. It is clear, the translation is understandable (he doesn't use weird made-up circumloqutions for terms like rigpa, yeshe, rigpai tsal, etc, like some translators do), and really and truly Self-Liberation is a text which is introduces the reader to the nature of mind every time it is read. I haven't seen John since way back 1981, when at Lama Gonpo's I loaned him a text of the Hevajra Tantra before he left for India to receive the empowerments. He's gone on to bigger and better things since then, but this early translation of his will never be bettered.

Published by Thriftbooks.com User , 18 years ago
Prospective readers of this work may wish to know that it has a descriptive subtitle -- "An Introduction to the Nature of One's Own Mind from *The Profound Teaching of Self-Liberation in the Primordial State of the Peaceful and Wrathful Deities* A terma text of Guru Padmasambhava expounding the view of Dzogchen, rediscovered by Rigdzin Karma Lingpa." In other words, it offers itself as a "postponed revelation," a terma (treasure) re-discovered and offered to the world centuries after its composition. As such it is part of a large class of Tibetan Buddhist works. The text had previously been translated into English at the instigation of W.Y. Evans-Wentz, who published that version in "The Tibetan Book of the Great Liberation" which appeared in 1954 as the last of four volumes in the pioneering "Oxford Tibetan Series," which had begun in 1927 with another terma text, the "Tibetan Book of the Dead." The "Self-Liberation" treatise there followed an abridged translation of one of the traditional biographies of Padmasambhava, the legendary "Apostle to the Tibetans," and one of their patron Bodhisattvas, who is regarded as the real author of this and other works. These texts were surrounded by commentaries by Evans-Wentz and C.G. Jung. The latter is probably important for students of Jung. Evans-Wentz's contributions generally reflect a lack of information about esoteric Buddhism, and a tendency to substitute material from Hindu and Theosophical sources. Having compared the present translation (pages 9-28) with that offered by Evans-Wentz, I can say that it appears to be superior in clarity. Given the present, far more advanced state of Tibetan studies, it is certainly more likely to be accurate than the ad-hoc attempt provided by Evans-Wentz's translators. Additional features include the Tibetan text in transliteration, a glossary of Tibetan Buddhist terms, and an extended commentary. This is undoubtedly an advance on Evans-Wentz, although its devotional tone may seem cloying to some readers (including this one) There are also extended discussions of the Evans-Wentz and Jung interpretations. The dismissal of Jung is particularly interesting; although I don't much care for Jung myself, I felt that he was not being given sufficient credit for trying to take Asian traditions as seriously as he took those closer to home. (Of course, given Jung's reductionist approach to religion, this may amount to 0 = 0.)

An answer for the restless mind

Published by Thriftbooks.com User , 20 years ago
I discovered that upon reading this text, a part of my mind which was always seeking to understand this life had finally been satisfied! I do not consider myself a practicioner of buddhism, much less an expert, and yet what it had to say was clear and persuasive.(...)

Self-Liberation: Through Seeing with Naked Awareness

Published by Thriftbooks.com User , 21 years ago
The only thing to add would be that this is a new addition of previously published "Self-Liberation: Through Seeing with Naked Awareness". The work itself is a terma(treasure teaching) of Guru Padmasambhava discovered by master Karma Lingpa. Personally, I found this book of a great value for the reason of a very lucid INSTRUCTION rather than just theory, which is sufficiently expounded, too. It gives a clear explanation as to why and how the principle of a spiritual teaching can be misunderstood and points out directly on the right method of application of this knowledge. I would recommend this book to everybody!
Trustpilot
Copyright © 2022 Thriftbooks.com Terms of Use | Privacy Policy | Do Not Sell or Share My Personal Information | Accessibility Statement
ThriftBooks® and the ThriftBooks® logo are registered trademarks of Thrift Books Global, LLC