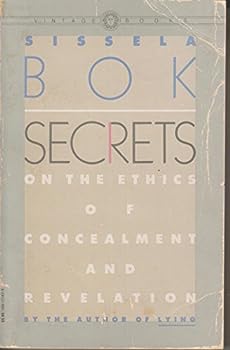 Shows how the ethical issues raised by secrets and secrecy in our careers or private lives take us to the heart of the critical questions of private and public morality. This description may be from another edition of this product.

"Speculating about [the] Imperceptible"

Published by Thriftbooks.com User , 14 years ago
From page 96: "One could imagine a club dedicated to false gossip, in which members vied with one another for who could tell the most outrageous stories about fellow human beings. So long as all knew the tales were false, and the stories went no farther, the practice would not be a deceptive one..."

Published by Thriftbooks.com User , 16 years ago
Sissela Bok enables her readers to consider our everyday situations and interactions in a new light. She acknowledges that all of us value the truth, although each finds ways to justify our lies. The book is thought provoking, while often a bit thick as Bok explores every nook and cranny of each ethical issue. The book creates in each reader the desire to know how far one is willing to go to be honest, and when it is justified to deceive. If you have the patience and time to deeply explore our daily decision making processes, I would recommend this book as an eye-opener.

Published by Thriftbooks.com User , 23 years ago
Sissela Bok has done it again, Secrets, like Lying, is a wonderful book exploring one of ethical issues that real people cope with every day. I recently assigned this book in my Introduction to Ethics class and recommend it highly. The students were most interested in talking about gossip (especially her claim that much of gossip is morally good), and scientific and military secrecy. As a philosopher interested in moral psychology I found her argument that what we call self-deception is better described as an over use of normally good (yes, good) strategies such as denial, avoidance and compartmentalization quite fascinating.

will make you think

Published by Thriftbooks.com User , 23 years ago
Bok writes with the skill of a philosopher and with the concern to actually do some good that is common to most everyone except many philosophers. She distinguishes secrecy from privacy. She distinguishes good secrets from bad ones. She defends the need for privacy and secrets in several convincing ways, including some surprising ones such as the need for surprise, but in an unconvincing way as well. She appeals to the lessons of Orwell's 1984, claiming that the protagonist Winston Smith was persecuted for secrecy and threw his life away because he wanted secrecy that badly. (In a footnote in another context Bok describes confessions thus: "The sin . . . may not always lie in what has been hidden, but rather in the hiding itself.") Is that right? It seems to me, as I remember Orwell's book, that Big Brother had the horrible defect of not allowing free speech, which is not the same as not allowing secrecy. Certainly Big Brother tried to prevent secrecy as well. But did He do this as an end in itself? If Smith could have openly dissented and loved he would not necessarily have wanted secrecy. I think that what's needed is some thought on how surveillance relates to the offense not of "invasion" but of distrust. Bok discusses self-deception as well as other secrets. She sees some advantages in Freud's picture of multiple selves with barriers between them, as opposed to Sartre's terminology, "bad faith," in trying to explain how a single person can keep a secret from him/herself. But Freud's picture, I think, remains a Socratic one: a person cannot "know him/herself." Sartre, on the other hand, is trying to avoid pinning responsibility on "another self." In Sartre's vocabulary, there is no barrier to knowing oneself. And why shouldn't I know myself? A plant has a past and a future, and we are usually happy to say that we can know a plant. This does not imply that we cannot learn more about the plant.
Trustpilot
Copyright © 2022 Thriftbooks.com Terms of Use | Privacy Policy | Do Not Sell My Personal Information | Accessibility Statement
ThriftBooks® and the ThriftBooks® logo are registered trademarks of Thrift Books Global, LLC