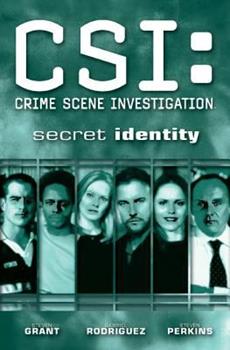 When a tourist is murdered in a cheap off-strip motel, the investigation is surprisingly routine - until it's complicated by a missing videotape and an imploded casino! The trail of evidence points to a man who died twice and left two different corpses, engulfing Gil Grissom and the CSI team in a quagmire of deceit and treachery that stretches back 20 years - and still threatens them today!

Published by Thriftbooks.com User , 14 years ago
Unfortunatley a lot of the reviews here are actually for different volumes of IDW's CSI comics. This is a review specifically of CSI: Secret Identity written by Steven Grant and illustrated by Gabriel Rodriguez and Steven Perkins. This is volume 5 of the CSI line, each graphic novel collecting a mini-series put out by IDW. The first three miniseries were written by Max Allen Collins (Ms. Tree, Road to Perdition) and were, quite frankly, boring. The fourth volume written by Kris Oprisko wasn't bad, but it had to do with the Las Vegas mob scene, and so felt a bit cliche. However this volume, written by Steven Grant is complex and dynamic. He has a great sense of pacing, knows how to weave a complex story that's still possible to follow, and has great cliff-hangers at the end of each chapter. The story is complex. The fictional Safari Hotel is being demolished. The implosion is made into a big public event. A tourist filming the implosion thinks he sees a body in the debris. He goes to the police but the video image is difficult to make out because of the dust and dirt kicked up by the implosion. But when the tourist is later found dead, his video camera and copies of the tape stolen, the police start looking deeper into the case. They find a body that had been buried in one of the cement pillars during the hotel's construction. The problem being that the corpse is a dead wringer for Vince Lansing, the owner of the hotel who died only a month ago. The case takes a lot of twists. All of Lansing's family members and former business partners seem to have something to hide. As more evidence, not to mention bodies, are uncovered, the case is definately leading somewhere but the dots don't quite connect. And when they really start getting close a CSI member gets physically assaulted on the front steps of the police station. Gebriel Rodriguez, who has been the artist on all of IDW's CSI books so far, has really developed as an artist. His characters, not only the CSI characters we already know but also the new characters introduced in this volume, are visually distinct and easily identifiable. His compositions and story-telling in this volume are a lot more dynamic than in previous volumes. Some of the credit for that should go to the writer for giving us great scenes like the old man trying to get away from the police in a golf cart who drives himself right into a sand trap. The painted art (which is used in the flashback and theoretical sequences which are usually shown in a different color or with CGI on the TV show) is by Steven Perkins. It's intentionally rough, imitating the work of Ashley Wood who illustrated the same types of seqences in the first three volumes. Personally I don't think using a rough painting to imitate a detailed CGI moment was the way to go, but it all boils down to personal taste. The weakest point is that there's no uniqueness to the characters, though, to be fair, this can be a weak point

Published by Thriftbooks.com User , 15 years ago
Great Read, if you are a fan of CSI, you will love this book
Trustpilot
Copyright © 2022 Thriftbooks.com Terms of Use | Privacy Policy | Do Not Sell My Personal Information | Accessibility Statement
ThriftBooks® and the ThriftBooks® logo are registered trademarks of Thrift Books Global, LLC