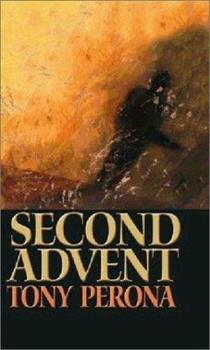 When Nick Bertetto is asked to return to his hometown of Clinton, Indiana, to investigate the death of the town patriarch, he views it as a chance to spend some time with his dad. The alleged suicide is probably murder, and family members are drawing battle lines over the will.

Published by Thriftbooks.com User , 17 years ago
If you're looking for a mystery that's far from the ordinary, then you're looking for "Second Advent". From the protagonist -a star investigative reporter who's turned stay-at-home dad to save his marriage (and trying to repress his newshound nose)- to the murder in his hometown that brings him out of semi-retirement whether he likes it or not, everything in this read takes you where you don't expect to go. This is pure fun that'll keep you guessing. If you go to the author's website you'll learn he's making this a series, so we've got that much more to look forward to.

Published by Thriftbooks.com User , 18 years ago
what do you get when you take murder, visions of the virgin mary, and a reporter who refuses to shrug off these events as coincidence? you get Second Advent, featuring nick bertetto as a stay-at-home dad/reporter who, while trying to keep his marriage intact, is also trying to solve the string of murders in small town clinton, indiana and their connection to sightings of mary.if you like your men of mystery sensitive, caring, and damn smart, then you'll love nick! tony perona is an up and coming author in the genre - i know we'll be seeing more of him.

If you got this far, buy the book.

Published by Thriftbooks.com User , 19 years ago
I'm ordinarily not a fan of this genre, and I'd never have read this one by some unheralded author if it weren't for a twist of fate that made me do it.But I was surprised, no, shocked that I was presented with a character that was both smart and likeable, palpaply real and just quirky enough. The humor was gentle and well-timed. The narrative voice was developed, sure, and invisible. And the story was ...well, I won't spoil it for you.If you like mysteries, gobble this one up. If you don't, just read it anyway.

Published by Thriftbooks.com User , 19 years ago
Tony Perona's Second Advent mixes murder, a woman's visions of a pregnant Virgin Mary, a charismatic preacher, body-building enthusiasts, battling beneficiaries, and a reluctant investigative reporter into a rich Italian minestrone that will satisfy any reader with a taste for off-stage murder mixed with more than one mystery.

Published by Thriftbooks.com User , 19 years ago
Nick Bertetto quit his job as an investigative reporter when an assignment led to the abduction of his wife Joan. As she still tentatively recovers from her harrowing experience, Nick receives an offer to investigate the recent death of Clinton, Indiana town patriarch Signor Gregorio Iavello which was ruled a suicide by the police. His granddaughter Martha and local priest Father Skip think otherwise. Though he believes he should reject the offer, Nick could use the fee and deep inside his heart he likes this type of work albeit he feels some guilt.Nick begins his inquiries, but fumbles his first interrogation of Martha's brother Tom. Still with the encouragement of his former mentor, he quickly returns to the groove especially questioning the motives of his clients. When former con artist Anna Veloche claims that she receives messages from Mother Mary warning of the Second Coming with the support of Father Skip and Martha, Nick wonders what he has gotten into, particularly when the danger mounts.Though Nick carries too much baggage from his personal life with his taking care of his three-year-old daughter and the mental troubles of his wife, fans will like him as he seems so everyday people. The story line moves briskly forward as Nick works the case while the religious fanatics work him. To learn whether murder or suicide occurred or whether Anna is pulling a con or actually talks with Mary read the book; it is worth the time as SECOND ADVENT is an entreating private investigative tale.Harriet Klausner
Copyright © 2022 Thriftbooks.com Terms of Use | Privacy Policy | Do Not Sell My Personal Information | Accessibility Statement
ThriftBooks® and the ThriftBooks® logo are registered trademarks of Thrift Books Global, LLC