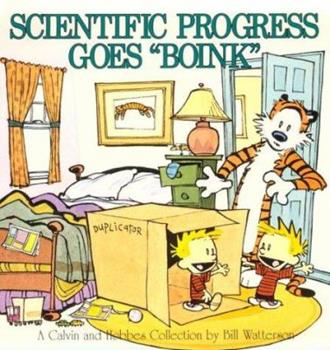 (Book #6 in the Calvin and Hobbes Series)

Calvin and Hobbes touched the hearts (and funny bones) of the millions who read the award-winning strip. One look at this Calvin and Hobbes collection and it is immediately evident that Bill Watterson's imagination, wit, and sense of adventure were unmatched. In this collection, Calvin and his tiger-striped sidekick Hobbes are hilarious whether the two are simply lounging around philosophizing about the future of mankind or plotting their latest money-making...

Published by Thriftbooks.com User , 16 years ago
When you get right down to it, is there anything better than Calvin & Hobbes? In this compilation or any of the others, you get lessons in quantum physics, nostalgic looks at the agony of grade school, observations in human nature, and a bit of the "thing under the bed" style horror. All this and you'll laugh yourself to the point of wetting your pants. The Calvin & Hobbes strips are hysterical. But beyond that, they are poignant and often bittersweet, reminding us of the children we once were and of the rich fantasies that come with childhood. Behold Calvin, utterly impish and wise-beyond-his years. His snowmen displays, at times morbid at times downright surreal, could fill a collection of its own. Calvin fancies himself the smartest boy in the world. And who can argue with him, other than his long-suffering parents and his faithful friend Hobbes, a tiger who may or may not be real. Hobbes is the pentultimate friend. He is Calvin's confidante and his patient ear, but he is also the first to pounce on the boy or to challenge his sordid views of the world. Together, the pair ponder the meaning of life, question the adult world, or sneak off to explore the fascinating landscapes of childhood found under dead logs or under rocks. If I were banished to a small island with only scant supplies to get me through my days, this book would be among the items in my trunk. I have had this collection for ten years or more and I've gone through it a dozen times. I'll go through it a dozen more before it's battered to the point of unreadable. Watterson is an absolute genius. But as you fall into the world of Calvin & Hobbes, you'll forget that they were created by a mere man at all.

Calvin and Hobbes Experience the Topography of Life

Published by Thriftbooks.com User , 16 years ago
This wonderful collection of cartoons has provided me many hours of enjoyment. As all fans of Calvin and his companion tiger Hobbes know, Bill Watterson's imagination has created a comic strip whose characters wonderfully capture flights of fantasy that help many of us vividly recall some of our most memorable childhood experiences. Calvin (in his many roles), Hobbes - the wonderful embodiment of every child's most loyal companion , Susie Derkins - the little girl next store who is constantly appalled by Calvin's weirdness,, Moe the bully, and Rosalyn the constantly embattled babysitter all manage to come to life in episodes that are sure to bring smiles to the faces of everyone who get to know them. This is fantasy at its best, at times simply lighthearted everyday experiences observed from Watterson's unique perspective and at other times cartoons being used as the conduit for wonderful philosophical observations. I found equally priceless both Hobbes leering smile as he responds to Calvin's question "I wonder why man was put on earth. What's our purpose? Why are we here?" with the simple answer "Tiger Food" and Calvin's sudden frightening bout with cubism when his ability to see both sides in a debate fractured his perspective and led him to see everything from all angles. In fact, the title of my review is adapted from one of my other favorite episodes in the book. Calvin's love of life and Hobbes love of Calvin are contagious; I found myself cheering them on and not wanting the book to end. (Luckily there are many other collections of this comic strip which was sadly terminated after only ten years.) I continually smile, chuckle and on occasion laugh out loud whenever I pick up this book, which I often do in my spare moment. And if you're with someone else when you're reading these, your progress will be slowed but your enjoyment increased by your desire to share the delight which you experience. A wonderful book for kids of all ages (I'm only 63) and most adults will enjoy it as well. Tucker Andersen

Calvin is my role model!

Published by Thriftbooks.com User , 20 years ago
"Scientific Progress Goes 'Boink'" is a collection of "Calvin and Hobbes" comic strips by Bill Watterson. The strips document the misadventures of Calvin, a small boy, and his stuffed toy tiger, Hobbes (who comes to life in Calvin's vivid imagination). In this volume we see Calvin's alter egos (daring interplanetary adventurer Spaceman Spiff, private eye Tracer Bullet), get a lesson in Calvinball ("No sport is less organized than Calvinball!), witness the rampage of the Calvinosaurus, and attend meetings of the G.R.O.S.S. (Get Rid Of Slimy girlS) club.Many of the storylines in this book have a strong science fiction element: in Calvin's imagination, his "personal gravity polarity" is reversed; he turns into a giant; etc. But the most fun comes when Calvin decides to clone himself. Much of the humor springs from the discontinuity between Calvin's rich fantasy world and the perspective of his often frustrated parents. Through it all, Hobbes remains a witty and philosophical pal to the mischievous Calvin.C & H is a comic strip that is both consistently funny and consistently intelligent. The art is great, especially in the fantasy sequences (check out the noirish milieu of Tracer Bullet, for example). Calvin himself is a nonconformist, a terror to authorities of all types, a dreamer and a schemer -- he's one of the all-time great comic strip characters, and "Scientific Progress" is a great showcase for him and Hobbes.

Published by Thriftbooks.com User , 21 years ago
The title of this book refers to the classic sequence of strips in which Calvin first uses his (cardboard box) duplicator to make a copy of himself that he hopes will do all the unpleasant things he has to do (like go to school). However, because the duplicate IS Calvin, he has his own ideas. This is another classic collection in the Calvin and Hobbes series. Bill Watterson is a comic genius whose presence in the funny pages has been sorely missed since his retirement.

Published by Thriftbooks.com User , 22 years ago
I've read almost every C & H book not discounting the fact that I read the strip regularly while it was syndicated. Brilliant, funny, touching and many times loving. In addition, my son learned to read starting at the age of 6 thru C & H. Now that he's 10 he still rereads the books. He's getting a little old to act out Calvin's antics, but he continues to appreciate them as I do. . . Thanks, Bill.
Trustpilot
Copyright © 2022 Thriftbooks.com Terms of Use | Privacy Policy | Do Not Sell My Personal Information | Accessibility Statement
ThriftBooks® and the ThriftBooks® logo are registered trademarks of Thrift Books Global, LLC