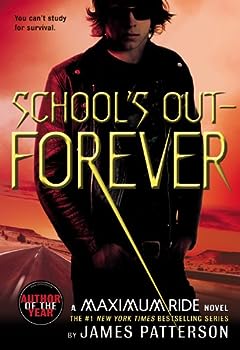 (Book #2 in the Maximum Ride Series)

Fourteen-year-old Maximum Ride and the other members of the Flock -- Fang, Iggy, Nudge, Gasman and Angel -- are just like ordinary kids -- only they have wings and can fly.After their last wild... This description may be from another edition of this product.

Published by Grace , 2 years ago
I love the Maximum Ride series! Its been one of my favorites since high school. I loved learning more about the Flock's powers in this book and following them in their journey to find their parents and confidence in themselves. Plenty of action and suspense that keeps you hooked on each page.

Not what I expected, but if you like sci-fi

Published by Barbara , 3 years ago
If sci-fi is your thing, you'll enjoy this book.

I read the free sample on Google play. MUST. HAVE. BOOK.

Published by Thriftbooks.com User , 16 years ago
It's been too long since Patterson released Maximum Overide. I had to go back and re-read the story to catch back up on the characters Max, Nudge, Angel, Gasman, Fang, Iggy, and Trouble (the now talking dog!). That book was also delightful, but it felt unfinished - leaving me feeling like I'd left a movie in the middle. I wanted to know if the winged kids would find their parents or get caught by the erasers, what additional skills they might develop and how well they would enter the "real world." Patterson's sequel, Schools Out Forever, is quite simply "magical." I loved it. It is filled with very short chapters (some less than a page), keeping things rolling at a high-pitched pace. The characters come across as real and unique. He's taken the time to develop their personalities, and you feel like you know and love them. In this second part (of many I hope), Ari (a particularly troubled eraser thought to be dead) is on the hunt for Max. I think it's cool that the villian is driven by complex (animalistic) urges (love, hate, lust, envy) rather than just being blindly evil. A fight with the erasers leaves Fang badly injured, and in seeking medical attention the group is exposed. Fortunately, rather than being taken back for more experiments, they are adopted by a kind FBI agent, Anne Walker. Anne seems more intereted in getting Max and her flock functioning as a well adjusted family than finding out their secrets, and she quickly gets them enrolled in public school. I don't want to spoil things, but let me say that nothing is as it first appears! Then there's Max 2, the improved replacement that thinks it will be a piece of cake to just step in and take over. This is a very fun light read, and I recommend it to anyone that doesn't take life too seriously. It reminds me of some of the better works by Koontz. It has broad appeal to many audiences (my wife and 8 year old daughter also loved it). Written by Arthur Bradley, author of "Process of Elimination" - an action packed thriller that pits a martial arts expert against a world-class sniper who is out to shape the next Presidential election. Please be kind enough to indicate if reviews are helpful.

Published by Thriftbooks.com User , 16 years ago
Saw the advertisement for the first book in a magazine and immediately purchased it. Was not disappointed! Really enjoyed reading it. The author will keep you spellbound page-by-page as you fly with the winged children and journey with them on their adventure to stay alive. You will come to know and love the characters. If you like sci-fi and reading an imaginative book, then this is a must buy for you. Passed the book to my dad and he also enjoyed reading it. When I saw that this book was the sequel to the first one, I immediately purchased it. Can't wait to see what happens to Max. Great job, James.

Published by Thriftbooks.com User , 16 years ago
James Patterson's second book in the Maximum Ride series is a fun thrill ride sure to keep readers on the edge of their seats! Max, Nudge, Angel, the Gasman, Fang, Iggy, and Trouble are still fleeing from the Erasers. For those unfamiliar with the series, Max and her flock are the results of a mysterious experiment in which human and bird DNA was combined, resulting in kids with wings. In addition to flying, the flock members are beginning to develop other talents, such as Angel's ability to read and control minds. Trouble is a dog rescued from the same doctors/scientists and Erasers are part wolf, part human, and determined to destroy the flock. Fang is badly injured in a skirmish with the Erasers and Max and the flock are forced to seek the services of a hospital. Naturally, the hospital doctors call in the FBI and the gang ends up temporarily living with FBI Agent Anne Walker while Fang recuperates. For a brief period, all seems normal and they even enroll in school. Unfortunately, all is not as it seems and soon Max will be forced to confront the reason for their existence as well as a supposedly improved version of herself and the return of the not-dead-after-all, Ari. MAXIMUM RIDE: SCHOOL'S OUT FOREVER is an enchanting tale for all ages. Just about everyone has dreamed of having the ability to fly at one time or another and Max and the flock bring this dream to life. Part of the sheer joy of this series is based simply on this fact. WHEN THE WIND BLOWS and THE LAKE HOUSE were such big hits because they also featured angel children but please note that, despite the similarity of the situation and the main character having the same name, those two books are not connected in any way to the Maximum Ride series. The first book in the series was a little tough for this reviewer as the plot kept getting confused with WHEN THE WIND BLOWS but the series has really hit its stride with MAXIMUM RIDE: SCHOOL'S OUT FOREVER. It is not necessary to read the first book in the series but most will probably want to do so as the adventures of Max and the flock are such a delight to read. James Patterson has put the flock in some rather ordinary circumstances and it was fun to see how the winged kids dealt with the daily hassles of attending school, making friends, and even dating. All of these circumstances are ones the reader will relate to and yet see in a different light while viewed through the eyes of the flock. Trouble, the talking dog, was a welcome addition to the series and helped keep the book fresh as he provided some very pithy comments that had this reviewer laughing out loud. MAXIMUM RIDE: SCHOOL'S OUT FOREVER is one ride readers will not want to miss! James Patterson has got it all in this book- great characters, non-stop action, and intrigue all told with a bit of humor to keep the story from becoming too dark. COURTESY OF CK2S KWIPS AND KRITIQUES

Published by Thriftbooks.com User , 16 years ago
Stop! Unless you've read the first book in the MAXIMUM RIDE series, Maximum Ride: The Angel Experiment (Maximum Ride), you should not read this review. Although MAXIMUM RIDE: SCHOOL'S OUT--FOREVER, could be read alone, you'll do much better if you read Maximum Ride: The Angel Experiment (Maximum Ride) first. Trust me. Read the first book, and then this one, and you'll end up thanking me. Now, if you promise you've already read the first book in the series, hold on to your hats, because the action heats up significantly in this second installment. Twenty-four hours after Max killed Ari, the bird kids are once again on the run. The whole gang is together again and in one relatively unharmed piece--Max, Fang, Iggy, Gasman, Nudge, Angel, and stray dog, Total. Max is trying hard to forget that when it came to escaping the Erasers (half-human, half-werewolf, read the first book!), she had no choice but to kill Ari in their fight for freedom. Except, surprise, Ari isn't dead! Jeb and the other doctors at the "school" are still trying to recapture them, and Fang has been deathly wounded. Max knows there is no choice but to get Fang to a real hospital, and she's not even really surprised when the FBI turns up to question them. What does surprise her is the appearance of Anne Walker, a head-honcho who wants Max and the gang to come to her home, where she can protect them, feed and clothe them, and study them. Fang still needs rest, and a roof over their heads and food in their belly at regular intervals sounds like a good idea. Although she's wary of Anne's true motives, Max and her flock move, temporarily, into Anne's home. They're even enrolled in school--a real school, not a cover for psychotic men in white coats to perform horrible experiments on them--and although that doesn't turn out so great, the time they spend at Anne's is helping everyone to forget some of the pain they've suffered. But the Erasers show up, as they always do, and Anne turns out not to be as wonderful as she first appeared, as also seems to happen on a regular basis. Not-dead Ari is determined to destroy the flock, especially Max, once and for all, and the Voice in Max's head is getting increasingly annoying as to her duty to save the world. This second book in the series is as full of adventure, heart-stopping adrenaline, and edge-of-your-seat action as the first book was. I loved the newfound powers that many in the flock gained in this installment, as well as Total's ability to talk. I can't wait to see what happens next, especially in regards to Itex and how it figures in with the seemingly imminent destruction of Earth. Kudos to Mr. Patterson for another winner in the MAXIMUM RIDE series. The only thing I hate is that it will probably be another year or so before we find out what happens next!

More of the same, but still entertaining.

Published by Thriftbooks.com User , 16 years ago
If you liked The Angel Experiment, you'll probably like the sequel. Max and Co. are just as humorous as ever and still finding trouble around every turn. As the novel unfolds, Patterson slowly reveals more secrets about the bird children while giving them about two-hundred pages worth of trying to act like normal school kids (complete with pranks, field trips, and yes, even a date!). Of course, things never go smooth for long. Their lives are periodically interupted by the diabolical Erasers, who have evolved somewhat from book 1, intent on capturing the children and bringing them back to Jeb (aka Max's father/scientist). While this novel does add a few interesting plot twists, don't expect too much to be resolved. School's Out--Forever is clearly only book 2 of a longer series. For me, that's a good thing. But for those wanting a conclusion, you'll have to keep waiting.
Trustpilot
Copyright © 2022 Thriftbooks.com Terms of Use | Privacy Policy | Do Not Sell or Share My Personal Information | Accessibility Statement
ThriftBooks® and the ThriftBooks® logo are registered trademarks of Thrift Books Global, LLC