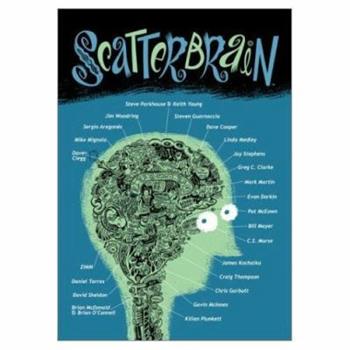 Here in the wild-n-wacky pages of Scatterbrain is an assembly of comics and children's book talent like no other ever produced. This praised anthology features the monocular adventures of Steve Guarnaccias American Illustration Award-winning Kid Cyclops, along with delightful tales from the honed, silly minds of Jim Woodring, Sergio Aragons, Steve Parkhouse, Kilian Plunkett, Evan Dorkin, Jay 'Jetcat' Stephens, Dave 'Weasel' Cooper, and more. Plus,...

Published by Thriftbooks.com User , 19 years ago
This collection of shorts, created by some of the most prolific minds in the comic arena, couples the realms of silliness with a childlike darkness, giving the reader something to laugh at sometimes while wondering if this should induce laughter at all. Thirty-six pieces exist here, some little blurbs that are semi-enjoyable, others bigger, more captivating oddities on parade, and still others, like Mike Mignola's Au Gung and the Beanstalk, are something to purchase editions like this one because of. The better pieces included here are:Abu Gung and the Beanstalk, by Mike Mignola, is the story of a Gung man who happens across a tale only Mignola could have crafted. It comes from one of three sisters, two of them starving, that speaks of former riches and squandered fortunes, of jewels traded for food and of one sister, the greediest of the lot, trading her's for some magic beans. Deciding they were rightfully her's to consume, she shares them not and suffers a most horrible fate. A beanstalk rips through her chest and ascends to the sky, dancing far from the reach of men. Abu, plagued by curiosity, decides to climb it and see just what awaits in the sky, and what he finds is wonderfully entertaining and well worth the read. It alone elevates the book to wondrous proportions.Fisher Price Theatre Presents: George Orwell's 1984, by Evan Dorkin and Sarah Dyer, is a wonderful depiction of 1984 through the use of everyone's favorite Fisher Price people. It takes memorable scenes, giving you a sculpted view of Orwell's vision in a nutshell. This, in my opinion, is also one of the best, most creative pieces here, ranking with the likes of Abu Gung and makes people like myself truly appreciate the minds behind it. Pip and Norton in the Spinning Buddha, by Dave Copper and Gavin Mcinnes, is a three-part tale depicting Pip and the obsessive links he'll go to in acquiring the newest fad, The Spinning Buddha with flaming Zycbrobe action and patented spin-o-rama action. Wanita and Glenn, by Craig Tompson, is simply a page filler with a semi-cutesy fill. Still, for some reason, blobs talking in barcode really touches something inside my soul.Sour Milks: A tragedy in Five Pages, by Pat McEown, is an odd tale of crime and misfortune brought about by soured milk.The Misadventures of Tommy T-Rex, by Brian McDonald and Brain O'Connell, is a wonderful piece about a young T-Rex and the extents to which he has to go to fit in with otherwise human counterparts. I think it sums it up in this conversation between Tommy and his human father. Tommy: "I miss my old friends." Father: "Well then you probably shouldn't have eaten them!" Its hilarity at its finest and deserves acclaim as well.Life Could be a Dream Starring Montgomery Wart, by Mark Martin, is about an amphibian youth and his adventures in a surreal day of skipping school. I found it youthfully enjoyable and worth a read.Hook, Line and Sinker: A castle waiting Short Story, by Linda Medley, was an enjoyable excursion
Trustpilot
Copyright © 2022 Thriftbooks.com Terms of Use | Privacy Policy | Do Not Sell My Personal Information | Accessibility Statement
ThriftBooks® and the ThriftBooks® logo are registered trademarks of Thrift Books Global, LLC