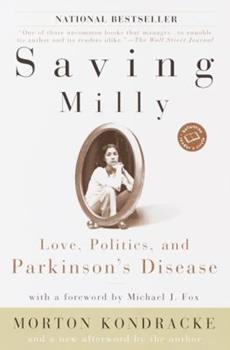 Morton Kondracke never intended to wed Millicent Martinez, but the fiery daughter of a radical labor organizer eventually captured his heart. They married, raised two daughters, and loved and fought passionately for twenty years. Then, in 1987, Milly noticed a glitch in her handwriting, a small tremor that would lead to the shattering diagnosis of Parkinson's disease. Saving Milly is Kondracke's powerfully moving chronicle of his vital and volatile...

ALL ABOUT COURAGE, COMMITTMENT AND LOVE!

Published by Thriftbooks.com User , 20 years ago
This a hard-hitting succinct look at parkinson's disease, its effect on those it imprisons, and the courage and committment of their family and loved ones. Martin Krondracke opens the door to his life with his beloved wife, Millicent who used to be a vibrant, outspoken, powerful being, - a source of his strength. Now she has parkinson's disease and he gives us a detailed account of the drastic changes in their existence. He writes with in-depth clarity and precision, and we join him in hope for a cure in time to save this valiant lady, and so many others now afflicted. Surely somewhere a team of brilliant scientists and physicians can marshall their resources and focus more diligently on a cure for this disease. Taut and heart-breaking, this book is about true grit! Thus far, three books of this magnitude have recently surfaced. All address what loyalty, committment, courage and love between two people can be when they choose to face life's challenges together. When you finish this book, try reading "John Adams", about John and Abigail Adams by author John McCullough; and then look at "I Love You Ronnie" by Nancy Reagan. Three enlightening and different perspectives.

Published by Thriftbooks.com User , 21 years ago
I was swept away by this book and read it in one sitting. For readers familiar with Morton Kondracke through his appearances on television or through his writings, this is a suprisingly warm and touching account. It is greatly to his credit that its warmth and honesty shine so clearly. Kondracke is open, honest, and extremely candid in his assessment of his marriage and himself. Here is a man who clearly gained insight from his own therapy experiences and from the loving and constant pressure from his wife to force him to grow. For an example of how one's narcissism can gradually be overcome, this book is worth reading. But it is so much more.One gets a vivid picture of the intimate workings of a marriage, the strengths and weaknesses of their child rearing, and the battle between career and family. One also comes away with great affection for both Morton and Milly and their deep love and devotion for each other.But there is still more. The description of the insidious progression of Parkinson's disease, the phases of wishful thinking, despairing realization, heroic fighting, valiant perseverence, and ultimately honest recognition of where things will lead, constitute an inspiring if also discouraging saga. The direct discussion of the alternatives facing Milly and Morton as they peer into the dark future are bracing -- chilling in their implications and invigorating in their honesty and bluntness.There is still more. The story of the politics of medical research, the duplicity of politicians, the disproportionate allocation of research resources, and even the difficulties and disagreements of the "good guys," such as the conflicts between the Fox foundation and the PAN, are wrenching for the reader. "Why can't potentially curable diseases get the resources they need?" the reader asks in frustration. It seems that only those personally touched by tragedy rise to the occasion, as is the case with politicians who are as different as Tom Harkin and Connie Mack. Yet there is still more to this book. There is the story of love and friendship. There are friends who stand by in generous support at the times of greatest trial and others who fade away. Always there is the deep love between Morton and Milly.Finally there is God and philosophy. I found Kondracke's "Christian Stoicism" to be very much in accord with my own views. One does the best with the hand one is dealt, asking God to help keep us strong during the ordeal. Whenever Kondracke asks God what he should be doing, God answers, "Take care of Milly." We don't often get miraculous divine intervention to take away our trials. But we can ask for and receive strength from God to deal with them in a loving and even heroic way. Milly Kondracke is the hero of the book, but so is Mort Kondracke. So too are their friends and everyone working for the cure of Parkinson's and other degenerative diseases. The book itself is sometimes harsh, sometimes sad, sometimes infuriating, but alw

Things We Thought We Knew

Published by Thriftbooks.com User , 21 years ago
At mid-life we think we know that bad things happen to good people, that character counts, and that love endures. "Saving Milly" brings these truisms home in a visceral and moving account that challenges us to be better than we are. The book operates on a number of levels. First, it is an intimate, compelling, truthful, and not always easy account of a complicated marriage, an unsparing snapshot of marriage in Washington's power circles, in this case journalism. In this is it like all intimate stories, universal and particular. The mix of the outwardly disciplined, Ivy League-educated, solidly reared author and the outspoken and idealistic wife is a grea t read.When Parkinson's disease hits Milly, the Kondrackes' life turns upside down and the author's most basic assumptions about what is important are challenged. He dedicates his life to saving Milly day by day, discovering the depths of his love, expressing it directly to feed Milly's emotional needs and in countless gifts of phycial caring and attention.He uses the lessons learned as a distinguished Washington and television personality to direct attention to the underfunding of Parkinson's research, thereby revealing both the cynicism of those politicians who talk the talk but don't walk the walk, and the moral high ground of others who listen and take action.Milly is the nominal heroine but the author is the hero.This is the rare book that will leave the reader a different person, better for the knowledge of what a good man can do when confronted with an incomprehensible challenge.

Published by Thriftbooks.com User , 21 years ago
"Saving Milly" is one of those rare self revelatory books that also contain a deeply passonate message for all to heed. For most of us, "In sickness and in health" are words avowed with no real snse of what they may mean. Morton Kondracke invites, cajoles and reveals to us the essence of what these words hold. Touchingly told, "Saving Milly" also contains a message about the reality of medical funding in America, or perhaps I should say, the reality of the lack of it, and urges all of us to become advocates for what we beleive in: love, commitment and passion for our particular cause. As we read this book, we too will be moved to help tilt the world in a slightly better direction. And in the process, perhaps, we will remember to reach into our own souls and tederly touch those whom we deeply love.

Published by Thriftbooks.com User , 21 years ago
This is not a good book. It's a great book! And it is a must read for anyone who has Parkinson's in their life, be it as a victim, a relative, a friend or a caregiver. Like its author and his subject, it's also a complex book. Complex in the sense that it could be characaterized in one of several genres.First, and foremost, this book is a love story written from a man's perspective. As a result, Kondracke shows the reader what it is like to have a type A personality filled with ambition, and to reconcile that with falling in real love with a remarkable woman.Next, it's an autobiograhpy and a biography. The biograhpy part is easier to capture because the reader knows from the outset that he's writing about his wife. Thus, Kondracke tells us about this wonderful woman who becomes afflicted with this terrible disease. The auto-biography aspect is more subtle. Kondracke is extremly open and candid about his own short comings and neurosis, something, unfortunately, one rarely sees in Washington's leaders.Next, it's a book about politics and the Parkinson's movement. For anyone interested in knowing how patients' rights groups fight in this town or about the history of Parkinson's in this town, Kondracke supplies amazing insights.Lastly, this is a book about Parkinson's disease and the terrible toll it takes on the victims, families and friends. Kondracke chronicles and describes with enormous clarity the costs and destruction that millions of people with a Parkinson's connection have grown all too familar with.If you have any interst in Parkinson's disease, get this book. Even if you don't and you want to read a great love story or a how to on politics, it's more than worth your time.
Trustpilot
Copyright © 2022 Thriftbooks.com Terms of Use | Privacy Policy | Do Not Sell My Personal Information | Accessibility Statement
ThriftBooks® and the ThriftBooks® logo are registered trademarks of Thrift Books Global, LLC