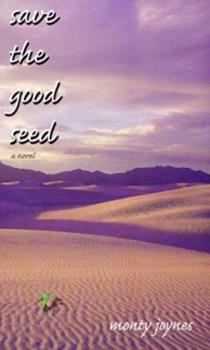 Save the Good Seed (Booker)

Save the Good Seedis the third novel in the on-going saga of Anglo, a middle-aged white man whose internal enlightenment leads him to a new life on an Indian reservation. Today "Anglo Who Became Chief Old Woman's Son" lives among the Pueblo Indians, a long way from his life as Winston Conover, middle-aged Virginia businessman. His disillusionment with that life led him to discard it--along with every vestige of his identity--as described in the first...

Yield is down, but the harvest is still good.

Published by Thriftbooks.com User , 21 years ago
This is the third book in Monty Joynes' series about Anglo (AKA Booker Washington), a middle class white realtor who completely abandons his suburban lifestyle to magically wander across the country and into a leadership role in a traditional Pueblo Indian community. I learned about SAVE THE GOOD SEED after stumbling across the initial work, NAKED INTO THE NIGHT, in my local college library. I was quite impressed, all the more so because I discovered half way through reading it that the author lived in my relatively obscure mountain town! I found him in the phone directory, gave him a call, and after a half-hour conversation, immediately went out and bought the other two books. I was not disappointed! SAVE THE GOOD SEED removes much of the attention from Anglo onto Ray Rey, a Native American man who was adopted (some would say stolen) as an infant in the 1950s from his people into a white family in Western North Carolina. The story line alternates between Anglo's increasingly controversial integration into his assumed Pueblo community and attempted reconciliation with his children, Ray Rey's tortured and confused rediscovery of his Indian heritage, and the unfolding careers of White Wing the dancer and his former showgirl managers (who were introduced in the previous book). Perhaps because it struggles to weave together such disparate themes into a cohesive fable that is part history lesson, the tale doesn't quite hold together as well as in the previous two books. Although it ponders some disturbing questions and posits gentle, sometimes remarkable spiritual solutions, the book loses some of its metaphysical momentum and clarity. It was heavier to read, and less memorable.Nonetheless, taken within the trilogy, SAVE THE GOOD SEED is an important and somewhat grounding contribution. However, it won't make any sense if you haven't first read its predecessors. All the books in Monty Joynes' series belong in the category of what might be called spiritual or allegorical fiction. Although the stories are obviously imaginary, they evoke perennial truths and awaken an intuitive sense of the sublime. I recommend all of them for anyone who wants to touch upon the essence of Native American spirituality, and the stillness of his/her own soul.
Trustpilot
Copyright © 2022 Thriftbooks.com Terms of Use | Privacy Policy | Do Not Sell My Personal Information | Accessibility Statement
ThriftBooks® and the ThriftBooks® logo are registered trademarks of Thrift Books Global, LLC