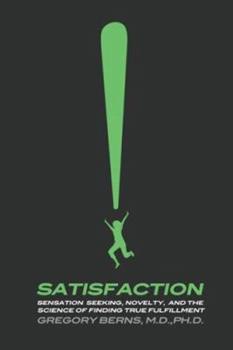 "A discussion that is meaty, contemporary and expansive . . . Berns artfully blends social critique with technical expertise."The Washington Post Book World In a riveting narrative look at the brain and the power of novelty to satisfy it, Dr. Gregory Berns plumbs fields as diverse as neuroscience, economics, and evolutionary psychology to find answers to the fundamental question of how we can find a more satisfying way to think and live. We join Berns...

Published by Thriftbooks.com User , 14 years ago
The author's professional expertise is in brain science, and this forms a large part of the book. When he takes things out of the laboratory, to Iceland, and an ultramarathon (yes, and an S & M club, although that seemed more superficial than the other field trips) and other places, the science begins to make subjective sense. The third strand in this provocative book is an analysis of motivation. This is a great book, and one that is fun to read, precisely because it doesn't rely on one set of assumptions to deduce a monochrome answer. Brain experiments can't determine subjective experience, but they can rule out theories; observation alone cannot make sense of life, but philosophies should be consistent with observation. By thinking deeply about all three, and writing a book to force readers to think deeply about all three, the author has advanced the debate considerably. Anyone interested in why we do what we do, and thinks a full answer has to reference brain function, subjective experience and philsophy, should read this book carefully.

Mr. Berns advances his theory about what satisfaction is

Published by Thriftbooks.com User , 14 years ago
Mr. Gregory Berns is an outstanding writer and I would not be surprised he would end up writing novels. Mr. Berns is a psychiatrist and his book seems to have a sound scientific foundation. In his own words: "Satisfaction differs critically from both pleasure and happiness by its inclusion of the dimension of action. While you might find pleasure by happenstance (winning the lottery, possessing the genes for a sunny temperament, or having the luck not to live in poverty), satisfaction can arise only by the concious decision to do something. And this makes all the difference in the world, because it is only your own actions for which you may take responsibility and credit." This book is very interesting and it reads easily. Highly recommended.

Published by Thriftbooks.com User , 16 years ago
In exploring what creates 'personal satisfaction' this little gem explores a broad range of drivers, from neurochemistry to the laws of econonomics. While its core theme is nailed down to 'novelty produces dopamine--the brain's fuel--that drives satisfaction', it artfully weaves interesting lessons about sex, money, and personal well-being along the way. And even when the author gets a little carried away describing the more technical aspects of neuroscience, it is over in a page or two. If you like a book that makes you think, as well as giving you something new to talk to your friends about, this one is dynamite.

Published by Thriftbooks.com User , 16 years ago
It has been a long time since I have read such a fascinating and informative book that both teaches neuroscience and at the same times conveys a personal message. Dr. Berns struggles to find the roots of satisfaction (and meaning) in life as a scientist and as an individual. His quest is readily recognized as a pursuit we all share. No topic goes untouched. I especially liked the more "racy" parts of the book including the trip to an S and M club and very revealing glimpses into his own life and marriage. His theories are compelling and provide lessons to get the most out of life. My eyes will never remain closed again.

Published by Thriftbooks.com User , 16 years ago
Part personal memoir part scientific odyssey, this book explores the relationship between pleasure and pain in the brain and how they are mediated and controlled. Ultimately, the author's goal is to explain how we attain true satisfaction in life, not merely physical pleasure, no matter how intense, since that is fleeting. The author's quest takes him from the labs of distinguished scientists to clubs frequented by the S & M crowd, and to countries like, oddly enough, Iceland, where he describes an interesting genetic study that is taking place. The author does a superb job of discussing the relevant neuroscience without getting too technical, covering the relevant history and scientists who have contributed to various areas of the brain research into pleasure and pain. The account of Dr. Robert Heath's work was fascinating, and that's just one of the many people discussed in the book. Add in some frank discussions of de Sade's and Masoch's lives and works, and how their writings relate to the issue of pain becoming pleasure and you have one of the most interesting brain books for the layman I've encountered in recent years.
Copyright © 2022 Thriftbooks.com Terms of Use | Privacy Policy | Do Not Sell My Personal Information | Accessibility Statement
ThriftBooks® and the ThriftBooks® logo are registered trademarks of Thrift Books Global, LLC