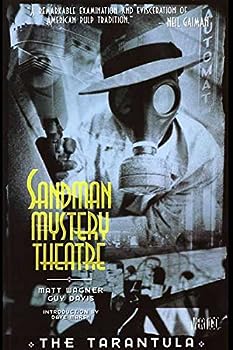 This description may be from another edition of this product. In the spirit of Spillane and Chandler, Matt Wagner sets a spicy tale of murder, danger and intrigue in the decadent, post-Depression world of 1938 New York. Readers follow the adventures of Wesley...

Published by Thriftbooks.com User , 14 years ago
The Sandman was a cult comics character in the 90s and The Sandman Mystery Theatre was an update of the Golden Age 1930s version of The Sandman but made in the 90s to keep it fresh. This first entry in the graphic novel series gets the series going. the title character is depicted with trench coat, gas masjk and gas gun, listed in the DC heroes game with godlike psychic powers. An interesting, addicting twist on 90s gothic comics that keeps serious readers interested with an aura of mystery and suspense. Recommended for mature readers, contains at times nudity and swearing, but kept classy and non violent.

Published by Thriftbooks.com User , 16 years ago
I confess: I only collected this book off and on during it's run, more off than on unfortunately, and now, after reading this trade and another, sorely regret my decision. This was one of the inaugral offering from DC's Vertigo imprint, and some probably felt that it was made to ride on the coat tails of the mega-popular Sandman book, but Sandman Mystery Theater stands on its own, mainly because it (for the most part) skews the fantasy elements of Gaiman's series, and instead opts for a noir, hard-boiled feel. The stories here are firmly grounded in the real world (save for Wesley's dreams). The writing is tight and focused, setting up and resolving the mystery in four parts (compare that with the ponderous storylines of today). Along the way, we're escorted into a world of vice, corruption and decadence. And it's absolutely beautiful.

Published by Thriftbooks.com User , 21 years ago
I think he would have come up with this character. The Sandman was always, amongst the Golden Age heroes, something of an anamoly - when others dressed in brightly colored spandex, the Sandman wore a gas mask, business suit, fedora, & cape. Matt Wagner & Guy Davis come up with one of the most unique "re-inventions" of the character, creating a horrific image straight out of WWI (with an appropriate gas mask) and putting a unique hero amongst a word where corruption and prestige walk hand in hand. This arc - which may or may not be a "rewriting" of a Golden Age classic (the Tarantula was, believe it or not, the Sandman's first foe) also has the trademarks of classic pulp fiction, including the seedy goings-on of a prominent family, a kidnapping, several murders....OK, this proves that comics aren't just for adults, and personally, I wish they would release more graphic novels (including the "Man of the Hour" arc, which had a unique take on Hourman). However, let this be your introduction into a unique series that, although never was a million seller, had a charm all its own.

The "other" Sandman, but just as good!

Published by Thriftbooks.com User , 21 years ago
Sure, Neil Gaiman's Sandman gets all the praise, but I prefer Matt Wagner's version of the Golden Age Sandman, which is modified to tie in loosely with Gaiman's stories. This wonderful series ended several years ago, and DC/Vertigo is hesitant to collect the story arcs, for some unknown reason. Thankfully, they at least released "The Tarantula", issues 1-4, for our reading and viewing pleasure. This book adequately sets up the series, fleshing out Wesley Dodds and the supporting characters as has never been done before. Guy Davis' artwork is beautiful, understated, and is the perfect match for Wagner's story. Don't let the fact that this series is "noirish" keep you away (this is no paper-thin Sin City). The story has depth and feeling, and enough plot to warrant multiple reads.

Published by Thriftbooks.com User , 22 years ago
Nobody has reviewed this book. You're kidding me right? This has to be the finest detective series modern comics has produced in years and no one has reviewed it? Yeesh. The Sandman was one of DC Comics earliest characters, and little more than a glorified Batman clone at best. But Wagner and artist Guy Davis take the walking cliche and make him into a driven individual determined to right injustice. But its the world of the classic Sandman that is so good: its the real New York of the '30s, complete with speakeasies and dives, the Depression, and immigrants; not at all like the WASPs usually populating the comics of the 1930s and '40s. The characters are 3D, especially the Sandman's alter-ego Wesley Dodds and his future girlfriend Diane Belmont. She in particular holds the reader's interest, because she is clearly the most capable detective, even though no one takes her seriously. No one save Wesley. . .and the Sandman. Fans of Neil Gaiman's fiction may know Morpheus, and a little about Wesley Dodds. But they don't know the whole story until they pick up this excellent graphic novel. Sadly, Sandman Mystery Theatre ended its run not long ago, but for the adventurous there's still a chance to find back issues in your local comic shop. Now if they'd only start collecting this excellent series in trade paperbacks, I'd be a happy man.
Copyright © 2020 Thriftbooks.com Terms of Use | Privacy Policy | Do Not Sell My Personal Information | Accessibility Statement
ThriftBooks® and the ThriftBooks® logo are registered trademarks of Thrift Books Global, LLC