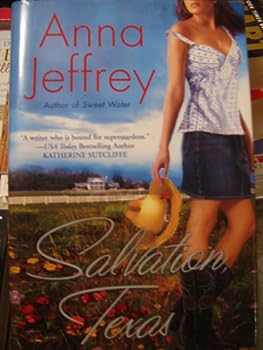 This description may be from another edition of this product. Rusty Joplin may be back in Salvation, elected to one of the most powerful positions in the county, but he isn't about to let the woman who once cost him everything get under his skin again. At least...

Published by Thriftbooks.com User , 14 years ago
SALVATION TX has all the qualities I look for in a book--mystery, intrigue, murder, passion, and reunited love. Rusty and Elena have a lot of chemistry together, and each is a strong character. I didn't guess the murderer before the end. I love Anna Jeffrey's writing and will buy her next book!

Published by Thriftbooks.com User , 14 years ago
When Rusty Joplin and Elena Ryder were teens in SALVATION, TEXAS, they fell in love, but her wealthy influential family ended their relationship. Shortly afterward Rusty left town. Three years ago after time in the military, he came home to become a deputy sheriff; now he is the Sanderson County sheriff having won the election. When Elena's sister Carla Ryder is found dead, her husband Gary calls the hospital not 911 or law enforcement. If deputy sheriff Cheryl Hopkins had not intercepted the call, a potential crime might have been erased; as it is the murder location has been devastated by a horde off visitors by the time Rusty arrives. Rusty cannot accept that an experienced horsewoman like Carla would make a rookie's mistake and get tangled with a rope around her neck even if Gary insists the horse is dangerous in daylight; Rusty sees a very calm tame steed. As he investigates a possible murder with Gary as the prime suspect, he gets no cooperation from the family except for Lena, who he still loves. SALVATION, TEXAS is an exciting second chance at love police procedural in which her family objects to their relationship and to his investigation. The story line is fast-paced as Lena helps Rusty with the case by opening doors for him that would have remained shut tight, as one revelation after another occurs. Readers will enjoy Anna Jeffrey's fine thriller in which homicide serves as a matchmaker. Harriet Klausner
Copyright © 2020 Thriftbooks.com Terms of Use | Privacy Policy | Do Not Sell My Personal Information | Accessibility Statement
ThriftBooks® and the ThriftBooks® logo are registered trademarks of Thrift Books Global, LLC