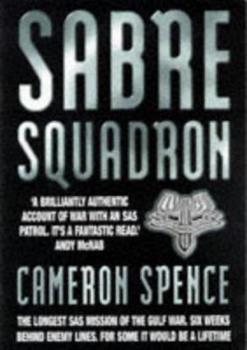 * PRE-ORDER YOUR COPY TODAY * With the outbreak of Gulf War hostilities a unit from 22 SAS slipped quietly over the border and into the enemy's backyard. It would be six weeks before any of the patrol... This description may be from another edition of this product.

They must have run a writers course at Hereford

Published by Thriftbooks.com User , 14 years ago
After the truth behind Bravo 2/0 came out, I take anything written by ex- gulf war 1 SAS with a grain of salt. With Sabre Squadron, the grain's not that big. Having read through it with an ex-cavalryman's perspective, I found it to be a fairly accurate portrail of troop life in the field (right down to the little personality clashes). I cant attest to the accuracy of the events presented in the book, but at least the action sequences were believable (no one man armies taking on the hoards here). The writer's style is easy to digest. Just don't expect to be biting your fingernails from the tension, as he tends to retell it as if he was having a quiet drink. Overall it's a fairly good 'once over' read.

Life and politics in the Special Air Service

Published by Thriftbooks.com User , 19 years ago
Cameron Spence served with the SAS during the gulf war, this is his story. As one of many new authors recounting there experiences in the British Armys elite forces Spence has gone out of his way to give us 'Civvies' a taste of life in the SAS. Spence has a story to tell but he goes beyond that, he gives us an insight into the politics and dark humour that make the SAS so fascinating. As well as describing the engagements they encountered while in Iraq, Spence also describes the effect these events had on himself and the rest of the unit. The main 'action' part of the book happens just past the mid way point, but the story continues with minor engagements, enough to keep any action junky reading till the end. This book isn't just about the SAS being the greatest force in the world, its about the people within this elite unit, the way they deal with the pressure they are under (often through humour and pulling pranks on each other) and how different there role is to the regular army divisions. I gave this book 4 stars because it lacks a little in the action department and talks a little to much for my liking to make it a 5 star. But its a fantastic book regardless.

In to the mind of the SAS

Published by Thriftbooks.com User , 22 years ago
Sabre Squadron, the first book by Cameron Spence, is a thorughly enjoyable and grittly realistic view of the SAS operations as part of 'Desert Storm'. It gets right down to the nity grity of what was going through the authors mind during battle, during night time reconasance missions and during the periods of "Down Time" when there is nothing else better to do than contemplate life and home. Spences style is that of continous flow for lack of a better word for it. It keeps you constantly interested through out and is very detailed without you even knowing it. This is a clasic example of the role of the Special Air Service and any fan or enthusiast would be mad not to get it.

Published by Thriftbooks.com User , 22 years ago
This book is brilliant. I hold tremendous respect for these guys. Spence's writing is so good that you feel that you were actually there. I have read this book a couple of times and still can't put it down. Along with Andy McNab this is the best book writen about the gulf war. Again it shows that although the British force are small compared to the US. We are the best and this book proves it.

Published by Thriftbooks.com User , 22 years ago
Gulf War. People think airplanes, cruise missiles, tanks and Saddam Hussein when they hear those two words. The British SAS were there before the land war began. They were in Iraq, Scud busting. This book describes the horrors of war, both physically and mentally. It is action packed with very close calls and the battle at Victor Two. I couldn't put this book down. It gets you involved and the descriptions are very realistic, you won't have trouble picturing the events, terrain and the people in your mind.
Trustpilot
Copyright © 2022 Thriftbooks.com Terms of Use | Privacy Policy | Do Not Sell or Share My Personal Information | Accessibility Statement
ThriftBooks® and the ThriftBooks® logo are registered trademarks of Thrift Books Global, LLC