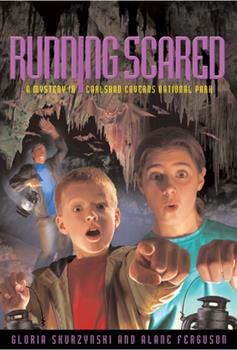 (Book #11 in the Mysteries in Our National Parks Series)

Jack and Ashley's search for eight-year-old Sammy has left them hopelessly lost in a twisted maze of tunnels deep inside Carlsbad Caverns. Bats are everywhere, and the echoes of their screeching cries sends a chill through the trio. The only light is the candle in their lantern. What will happen when it burns out, leaving them in total darkness?

Published by Thriftbooks.com User , 15 years ago
I thought that this book was one of the best books I've ever read so far in the series. It was very suspenseful and thrilling and had a lot of detail. This book is about Jack,Ashley and their parents going to Carlsbad Caverns National Park and they bring a eight year old boy named Sam Sexton and he is with the Landons because his dad died and his mother is in the hospital because she overdosed on drugs. Sam becomes attached to Jack and when they go to Dr Rhodes office she tells them a few facts about the bats that live there. Then the get a park ranger to bring them into left hand tunnel but then when they go to lunch Sam thinks that he saw Consulea take drugs and he tries to tell Jack and Ashley but the don't believe him. Then they go into the tunnel and Consuela starts acting funny the next thing you know it she faints and Sam gets freaked out and runs into the tunnel. Jack and Ashley run in after him but the soon get lost and then they find him but the better thing of something fast because it the candle burns out they will be left in total darkness. I recommend this book to an 8-13 year old or someone who likes mystery books.
Copyright © 2020 Thriftbooks.com Terms of Use | Privacy Policy | Do Not Sell My Personal Information | Accessibility Statement
ThriftBooks® and the ThriftBooks® logo are registered trademarks of Thrift Books Global, LLC