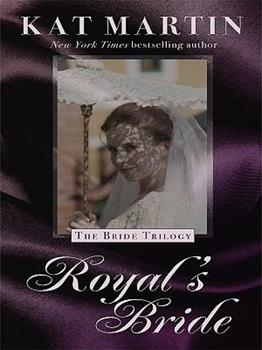 (Book #1 in the Bride's Trilogy Series)

After years abroad, nobleman Royal Dewar returns to Bransford Castle to find his father dying and the family treasury nearly empty. Then the old duke gets Royal to promise to marry heiress Jocelyn Caufield to restore the estate. However, it is not his fiance who quickens Royal's pulse, but her penniless cousin, Lily Moran. Original.

Published by Thriftbooks.com User , 11 years ago
Royal Dewar, duke of Bransford, promised his father as he lay on his death bed that he would marry Jocelyn Caulfield and bring the family's estate back from ruins. Royal doesn't want to marry, but he will, for his father's sake. Jocelyn is wealthy and breathtakingly beautiful, except Royal is more attracted to Jocelyn's cousin Lily Moran. Royal tries to ignore his attraction to Lily, but once he tasted her lips, he cannot get enough. And now, with Lily helping to catch the man responsible for his father's ruin, denying his feeling for her is even harder. Royal loves Lily, however with so much at stake, is love enough? Royal mistakenly thinking Lily is his bride-to-be, and Lily's candid admission of her past and Royal's reaction to it, are just two of the many wonderful moments in Royal's Bride. From fun to exciting and romantic to erotic, Royal's Bride is a lovely historical novel with not one, but two heart-warming romances. Things seem a little unfair to Jocelyn at times, even if she is a brat, but watching Royal and Lily together is delightful. By the middle of the story I was as captivated by Jocelyn's plight as Royal and Lily's. I love how things work out for all of them. Royal's Bride is a charming love story rich in tradition and full of angst. Nannette Reviewed for Joyfully Reviewed

Published by Thriftbooks.com User , 11 years ago
I lost of lot of hours of sleep over this book - I went to bed with ¼ of the book left and dreamt all night if Royal was going to honor his father last wish and marry Jocelyn or if he would follow his heart and marry his cousin Lily. I was concerned that Royal and Lily con to get Royal's family money back from a evil con-artist was going to backfire and then I wondered if Jocelyn (Royal fiancé) was going to run away with her true love... and if it would have a happy ending. It was a long night - I won't tell you how it ended but I closed the book happy and satisfied and wondering about things would work out for the rest of the brothers... I will just have to wait for her next book Reese's Bride due out Jan 2010 & Rule's Bride due out May 2010.

Published by Thriftbooks.com User , 11 years ago
Royal's Bride was more the sex and lust, it was a story. The characters have depth and color. The Sixth Duke of Bransford made a death bed pledge with each of his three sons. Royal was to marry for wealth and restore Bransford Castle, Reese to live at and restore Briarwood Manor, and Rule to create an alliance with the Americas. All three sons pledged their oaths to their father before his death. This book was based on Royal's pledge. Kat Martin built the characters so you understood their unspoken feelings. Royal, an honor bound man, was also determined to find out how his father had lost his fortune. Lily, the cousin of Royal's betrothed Jocelyn, had a seamy past. Not at all what the Seventh Duke of Bransford should fall in love with. This book had honor, loyalty, intrigue, laughter, tears, suspense, victories, failures, romance and more. The friendships were solid and real. The plot tracked well, with no story lines unfulfilled. Even the side characters had depth that made you care about them too. I personally enjoyed Aunt Agatha, the Oarsman, Jack Moran, and Tommy. I look forward to reading Reese's Bride.

Published by Thriftbooks.com User , 12 years ago
In 1854, Royal Dewar comes home after spending several years in foreign countries to pay his respects to his dying father, the duke of Bransford. His dad insists Royal make a death bed promise to marry an heiress to restore the family's dwindling fortune that was devastated by a con artist. Unable to say no or even ignore the plea Royal acquiesces. Although he knows no one but himself is aware of his pledge, the honorable new duke proposes to wealthy snooty Jocelyn Caulfield; she accepts. However, he falls in love with her impecunious feisty cousin, Lily Moran, who has a criminal history when they team up to recover the money his father lost. While Jocelyn also falls in love with Christopher Barclay, Lily is abducted by their adversary; Royal vows to rescue his beloved and find a way to marry her. This is a terrific Victorian romantic suspense starring a strong lead pair and a solid support cast especially the heroine's arrogant cousin and the villain. The story line is fast-paced from the moment Royal comes home and never slows down. Although the post game show is too perfect, fans will enjoy the tense game. Kat Martin always entertains the audience with her fantastic romances. Harriet Klausner

Published by Thriftbooks.com User , 12 years ago
I really enjoyed this book! To me this is vintage Kat Martin. I felt that Royal and Lily fell in love right from the start. I loved the side story of Jocelyn and Christopher. Can't wait for the other books to be released.
Copyright © 2020 Thriftbooks.com Terms of Use | Privacy Policy | Do Not Sell My Personal Information | Accessibility Statement
ThriftBooks® and the ThriftBooks® logo are registered trademarks of Thrift Books Global, LLC