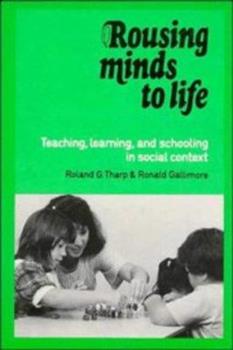 Addressing widespread discontent with contemporary schooling, Roland Tharp and Ronald Gallimore develop a unified theory of education and offer a prescription: the reconstitution of schools as 'educating societies'. Drawing on studies from the family nursery through the university seminar, and on their own successful experiences with thousands of students over two decades, their theory is firmly based in a culture-sensitive devellopmental psychology...

Winner of the 1993 Grawemeyer Award in Education

Published by Thriftbooks.com User , 23 years ago
Two California professors who advocate changing the educational environment to improve learning have won the 1993 University of Louisville Grawemeyer Award in Education. Roland Tharp and Ronald Gallimore describe in their 1988 book, "Rousing Minds to Life: Teaching, Learning and Schooling in Social Context," a comprehensive approach to retooling education. The Grawemeyer Award in Education of $150,000 is awarded annually for ideas that have potential to bring about significant improvement in educational practice and attainment. Tharp and Gallimore suggest three keys to educational development -- activity, context and time. All human activity takes place in specific contexts; to change human activities, teachers must look first and foremost at the contexts that drive the activities; changing contexts -- and therefore human activities -- requires sustained and persistent work over time. They then give examples to back up their theories. For instance, the book focuses in part on the Kamehameha Early Education Project, a 15-year program in which an interdisciplinary team of teachers and researchers developed a literacy program for native Hawaiian children. The successful project led to similar efforts with groups such as Latino Americans in Los Angeles and Native Americans in Arizona. It also inspired a second generation of research in the area. Tharp and Gallimore actually were co-principal investigators for the project, which began in 1969. Gallimore participated in the program until 1979; Tharp until 1986. Currently, Tharp is professor of education and psychology, and Director of the Center for Research on Education, Diversity & Excellence at the University of California, Santa Cruz. While in Hawaii, he founded and directed the Center for the Study of Multicultural Higher Education at the University of Hawaii and the Psychology Department's Clinical Training Program at the University of Hawaii at Manoa. Gallimore is a professor in the Department of Psychiatry and Biobehavioral Sciences at the University of California, Los Angeles. Gallimore taught psychology and anthropology and was a research fellow of the Social Science Research Institute at the University of Hawaii.
Trustpilot
Copyright © 2022 Thriftbooks.com Terms of Use | Privacy Policy | Do Not Sell My Personal Information | Cookie Preferences | Accessibility Statement
ThriftBooks® and the ThriftBooks® logo are registered trademarks of Thrift Books Global, LLC