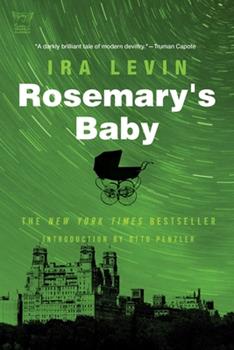 Rosemary Woodhouse and her struggling actor husband Guy move into the Bramford, an old New York City apartment building with an ominous reputation and mostly elderly residents. Neighbors Roman and Minnie Castavet soon come nosing around to welcome the Woodhouses to the building, and despite Rosemary's reservations about their eccentricity and the weird noises that she keeps hearing, her husband takes a special shine to them. Shortly after Guy lands...

Published by Nancy Turpin , 2 years ago
I can't wait to read this again, it is such a good book, so glad I finally have my owncopy

Published by emery , 2 years ago
Was really great for being a used book. Haven't read the book yet tho

Published by Thriftbooks.com User , 15 years ago
I love the movie so I wanted to read this and see if I could get more from the story. It's actually almost identical to the movie, though. Apparently, the movie is the most accurate adaptation of a book ever so there's not much more here except for a couple tiny scenes that were probably planned to be in the movie and eliminated at some point for time or whatever. In any case, this is a fun book and even knowing the story from watching the movie a million times, it does its job of being scary and suspenseful.

Published by Thriftbooks.com User , 21 years ago
Why am I giving this book 5 stars when the writing isn't especially great? Because Ira Levin hit every right note in "Rosemary's Baby" and made it into an instantaneous horror classic. On one level, it's a great horror story; on another, it's also a kind of morality play: God has a son; what happens when the devil gets jealous and wants one too? Enter Rosemary and Guy Woodhouse, almost-newlyweds, new tenants in an old, luxury building called "The Bramford", famous for its high ceilings and working fireplaces, notorious for its unsavory happenings (dead baby wrapped in newspapers abandoned in the basement). They are warned off by Hutch, an old friend of Rosemary's who knows all about the building's sordid history, but disregard the omens. Rosemary is a housewife (yes, back in the day there actually were such things) who wants to be a mother. Guy is an actor and a rising star whose talent is overshadowed only by his unlimited ambition. Next door are the Castevets, Minnie and Roman, a delightfully ditzy old couple who just happen to head a coven of witches who have made a pact with the devil. Rosemary wants a baby; Guy wants a leading part in a hit play; the witches want... well, all the ingredients are there for a devil's brew that sets the pot boiling wonderfully for 260 pages. After a nightmarish impregnation, Rosemary goes through a hellacious pregnancy, presided over by Dr. Sapirstein, a famous "society" obstetrician who assures Rosemary that her pains will go away in a day or two. Hutch's death after a long, suspicious illness jolts Rosemary out of her cocoon of trusting ignorance, and here Levin builds the horror up ever so insidiously until it hits you like a sledgehammer. Rosemary discovers who her neighbors are; that they have drawn her husband into a diabolical plot, and when she runs to Dr. Sapirstein for protection, she finds out that he too is... well, if you can't trust your husband and your obstetrician, who can you trust? Rosemary is left alone to try to save her baby from what she fears is a plot against his life and safety, remembering that dead baby in the basement; there's a plot afoot, all right, but what it is, is something neither Rosemary or the reader could possibly imagine until they stare at it, literally and figuratively, in the eyes. Levin is one terrific storyteller and he manages to time the action to coincide perfectly with the story line; Rosemary conceives, ironically, on the night of the Pope's visit to New York in early October, and the baby is born, fittingly, right after midnight, "exactly half the year around from you-know". Some readers have complained that the ending is lame after all the shock and horror, and they have a point, but it's fun to wonder, how else could Levin have ended this story? It's a perfect psychological horror fantasy, no blood, no gore, no things that go bump in the night, but just the ordinary neighbors next door that can and do raise all kinds of hell. It's a c

Published by Thriftbooks.com User , 21 years ago
Even though the ending to this book is known by all, you are still likely to find yourself in suspense over whether or not the nice old neighbors are really just nice old neighbors or if they are going to sacrifice the baby. Ira Levin writes breezy thrillers, well-crafted from beginning to end with compelling characters, nicely woven plots and several surprises. It's not until you read several badly contrived thrillers and horror books that you realize how much skill it takes to write one that works on all levels.There aren't many insights into the human condition. This book will not make you look at your life in a whole new way and it probably won't make you suspicious if you are pregnant. Ira Levin even has an introduction to one edition complaining about people taking the book to the ridiculous levels of seriousness (you can read the "Left Behind" series if you want a 'serious' novel about Satanic conspiracies). What this book will give you is an enjoyable reading experience that will either be a relief from whatever deep and heavy book you've read or the bad thrillers. And by the way, this is one of those cases where the book and the movie are almost identical except I think that there is more about the Satanic cult's origins in the book.

Published by Thriftbooks.com User , 24 years ago
I have been on an Ira Levin marathon since reading the sequel to this book. So, I went back and read R's Baby after not having read it in thirty years. It is such an amazing book on so many levels it's hard to talk about. Everything, description, dialogue, characters, setting, and most of all plot, mesh seamlessly in one of the great reads of all time. If you've never read it you are in for a treat. As a side note, the film version by Roman Polanski is also a masterpiece. It is the best adaptation of book to film ever done. The reason for this is simple: It IS the book. Polanski didn't know he could change anything so 95% of the dialogue is taken verbatim from the book and the other five percent is paraphrased. It helps that Levin writes the best dialogue of anyone writing fiction today. But the more amazing thing is, that visual touches that I've been ascribing to Polanski all these years are ALSO right out of the book, as are several costume descriptions. Were it only that more movie adaptations were this faithful and we weren't subjected to baboon screenwriters' "fixing" of novels. For the clearest example of horrifying adaptation, one only need turn to Mr. Joe Estherhaz' adaptation of Ira Levin's Sliver
Trustpilot
Copyright © 2022 Thriftbooks.com Terms of Use | Privacy Policy | Do Not Sell My Personal Information | Accessibility Statement
ThriftBooks® and the ThriftBooks® logo are registered trademarks of Thrift Books Global, LLC