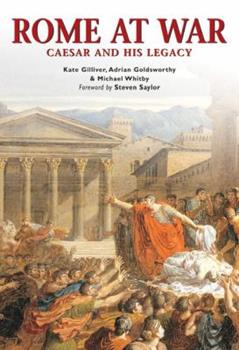 Rome at War: Caesar and His Legacy (Essential Histories Specials 6)

The story of a small town that rose to become the most powerful empire of the ancient world has been an inspiration to generations of people. Even after the collapse of the Roman Empire, many nations and their leaders have styled themselves 'heirs of Rome', emulating its society, technology and warfare. This book details the wars that shaped the Roman Empire, from the Gallic Wars of Julius Caesar and the subsequent civil war between Caesar and Pompey...

Published by Thriftbooks.com User , 12 years ago
Recently I have become very interested in Roman history and have found this book to be a good overview of the empire from Caesar's time forward. This text as aforementioned is a compilation of: The Gallic War, Caesars's Civil War, and Rome at War 229-696. It covers in very brief summary the major actions/wars of the Roman empire both Western and Eastern parts but due to its length 288 pages is very brief on some subjects such as battles and commander bios. That being said the most important battles: Siege of Alesia, Pharsalus, Thapsus, and Adrianople are diagrammed and some detail is provided in describing the battle. What made it a very good book is its appreciation of not just the army but of the socio-economic factors at play that either strengthened or weakened the army and how that played an integral role in the outcome of war. Overall a good book I would recommend to others

Published by Thriftbooks.com User , 13 years ago
A good book in the Osprey tradition. It basically is 3 books in one from the Osprey publications. Many good maps and outlines of battles. Not as in-depth as some other books, but a great starting place for anyone interested in the Roman war machine
Copyright © 2020 Thriftbooks.com Terms of Use | Privacy Policy | Do Not Sell My Personal Information | Accessibility Statement
ThriftBooks® and the ThriftBooks® logo are registered trademarks of Thrift Books Global, LLC