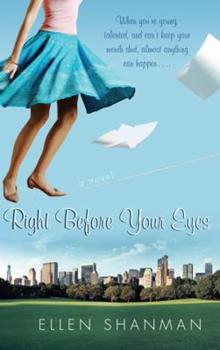 Right Before Your Eyes: A Novel

Outspoken playwright Liza Weiler left Yale with everything she thought she needed to make her mark on the New York stage. So why, nearly a decade later, is she still waiting for her "real" life to finally begin? But like any great drama, Liza's life only needs one good twist. And that's what happens when she turns her ankle on the way out of a downtown nightspot and falls into the arms of a suspiciously gallant Wall Street prince and a practically...

A Smart-Funny New Writer...This was FUN!

Published by Thriftbooks.com User , 14 years ago
Ellen Shanman is brilliant! Much like her clever, hip protagonist, playwrite Liza Weiler, this adept, insightful new writer is off to what should be a glorious career. Shanman's debut novel reads like a movie--a romantic comedy you really want to see. Her bold, engaging and clever use of language conveys keen observations of the human condition through the eyes of her adorably (sometimes excruciatingly) "human" protagonist Liza: Just a couple of examples: (Upon returning late to her "day job," tempting in a convent:) "My face said, 'ONE! ONE LONG LUNCH! EASE UP OLD WOMAN!' But my voice said, 'Absolutely, Sister, I apologize.' Unfortunately, I think Sister Lorraine heard my face." "If looks could kill I would know by now. I've spent years trying." The whole books is filled with pearls like those. Ellen Shanman is a writer to watch...and read. [Susie Mantell is the bestselling author of the award-winning stress-relief audiobook on CD, "Your Present: A Half-Hour of Peace."Your Present: A Half Hour of Peace

Published by Thriftbooks.com User , 15 years ago
"Right Before Your Eyes" is a great introduction to a very talented new writer. Shanman writes dialogue in a fluent witty repartee while still maintaining the depth and seriousness of her characters' relationships. For anyone who has experienced life as a 'struggling artist' in New York City this book is a must-read. Already exhibiting a polished style and with two more books on the way, Shanman is definitely one to watch.

I have a new favorite writer & her name is Ellen Shanman.

Published by Thriftbooks.com User , 15 years ago
If you have ever had a friend, you will love this book. If you currently need a friend, this book will serve in her stead until she shows up. Ellen Shanman has created the sort of world you don't want to leave, especially if you occasionally get to meet her Liza for coffee. We all love the sassy, crackly wit of a writer like Shanman, but what she does in a very clear and economical way (read: in one line, or so it seems...)that one doesn't find as often as one should like, is reveal quite an interesting and complex flaw in Liza. Right Before Your Eyes is, above all, a smart read. It's a fun and entertaining treat; but if it were a sundae, say, its cherry on top would be from Chekov's own orchard.

Published by Thriftbooks.com User , 15 years ago
"Right Before Your Eyes" is such a joy to read! I found myself growing to love and care for these characters as they navigate the trials of New York young adulthood. Ellen Shanman's writing is razor sharp with a wit that gets at the simple truths of life and love. Not to mention that it's laugh out loud hilarious!"Eyes" is a fabulous launch of a great writing career ahead!

Published by Thriftbooks.com User , 15 years ago
Wannabe playwright Liza Weiler hopes to see her work performed in New York. However, so far she is a starving young artist with nothing on her résumé; for that matter her personal life is just as vapid. Ironically a sprained ankle leaving the River Town Lounge gives her a big break though she also starred at the St. Vincent emergency room. However, she meets two hunks because of the incident; George of Wall St. M & A fame who knows ankles from Yale Rugby and Dr. Tim of ER (the hospital not the old show). As her personal life comes alive, director Will Atherton selects her play as his next show on the Applause Channel. Floating on cloud nine, will success spoil Liza Weiler? Readers who appreciate a deep character study of a wannabe artist will enjoy the discerning look at the successes and failures of Liza Weiler. The story line has a chick lit feel that enables the audience to see inside the heroine's mind; but that also slows the pacing down a bit. Still fans will flock to the enthusiastic Liza as she hopes to become the next great American playwright. Harriet Klausner
Trustpilot
Copyright © 2022 Thriftbooks.com Terms of Use | Privacy Policy | Do Not Sell or Share My Personal Information | Accessibility Statement
ThriftBooks® and the ThriftBooks® logo are registered trademarks of Thrift Books Global, LLC