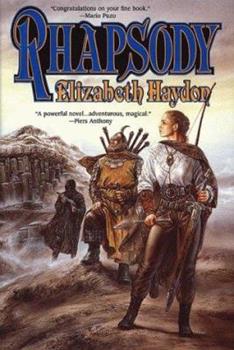 (Book #1 in the Symphony of Ages Series)

Rhapsody, n, (1542) 1: a portion of an epic poem adapted for recitation 2 archaic: a miscellaneous collection 3 a (1): a highly emotional utterance (2): a highly emotional literary work (3): effusively rapturous or extravagant discourse b: Rapture, Ecstasy 4: a musical composition of irregular form having an improvisatory character. Elizabeth Haydon is a major new force in fantasy. Equipped with a quick wit, Haydon has a sharp ear for dialogue, panache...

Fantasy at its best

Published by Thriftbooks.com User , 20 years ago
I had heard so much about this book that I had to check it out. This is the one time I remember not being disappointed by a book that had soch great buzz. Haydon is a new breed of writer, with a skill at picture painting and character development rarely seen in fiction, especially scifi/fantasy fiction today. The title character is an emotionally complex, real woman dealing with power that exceeds her capacity to deal with. Achmed the Snake, one of the best characters I've ever seen, blends cool ability and attitude with an inexplicable charm. And who cannot love Grunthor? My interest was especially piqued by the fact we don't know who the bad guy is. In most popular fantasy the players are laid out for us in an obvious manner in the first 20 pages of the book. The Dark Lord visits Rand. Richard knows he's going to have to face Darken Rahl. But even after the sequel to this book, we are still guessing. Haydon give clues without giving the mystery away.I recommend this highly to anyone, whether or not you are a fantasy reader.

The best in many a year

Published by Thriftbooks.com User , 21 years ago
This book has it all--great writing, characterization, action, magic and mystery. The plot makes sense, the emotions are real, and it is entrancing. The marketing copy on every fantasy book that comes out heralds its author as the new master. This one actually could live up to that title.Achmed the Snake has to be one of the all time great characters in recent fantasy literature. Flawed, cranky and brutal, he nonetheless rises to greatness in a real and plausible transition through the long trek the three main characters make within the pages of the book. Grunthor is great as well, the comic relief sidekick that also has a very realistic, very serious side. I was reminded of noncommissioned officers in the military when I read about him, the men who follow a leader without question. This rang very true to me, and made the story even more poignant. The relationship between these two men, who often communicate without needing to use words, shows that Haydon is a keen observer of human behavior.I found the characters of Rhasody and Jo refreshing. Jo is an obnoxious teenager, and anyone who has a child or siblling this age will recognize the behavior at once. While you many not feel fondly for her, she is certainly amusing and a great foil to the other three. Rhapsody represents a great risk for an author to take, a heroine who is strong yet flawed, and who is dealing with powers of a magnitude she can't understand. I found this more realistic that the standard Richard Rahl type, who gets handed a sword and suddenly goes from humble wood guide to war wizard in the blink of an eye. You get to see Rhapsody struggle to learn how to fight, to feel out of place in a land where her skills are not wanted. This is brilliant, risky stuff. People who are only comfortable with cookie cutter heroes and heroines will probably not like this book and these characters.And while taste differs, and I respect that, I don't get these people who feel the need to tear down a book without any good reason. Ignore anyone who duns this book without giving you any specifics. They haven't read it.

Published by Thriftbooks.com User , 22 years ago
Compelling characters, new ideas, vivid writing. If you are looking for something new in any genre, AND want more of the same old good stuff you like, this one is for you. Actual rating, 4.8. One of the difficult tasks in fantasy, or any novel, is to create a world that works, that has a good balance of the dream and the real. Another difficulty is drawing multidimensional characters that are spontaneous and not senselessly chaotic. A third is pushing the language around so that a reader can involve all five senses, otherwise everything tastes like cardboard. Haydon has ably tackled all these challenges. WORLD: The world, while it includes magical qualities, is as limiting and frustrating as our own. CHARACTER:The characters are fresh and surprisingly real. In addition there is a heroine and multiracial discussion that avoids the cloying political correctness so common in the worst new books. ( a plug here for my favorite line of the novel 'The army will now feed.' Whoa!)LANGUAGE: Haydon doesn't tell the story, she shows it. This may be as sophisticated as modern fantasy has been in the last decade. It elevates the standard.I look forward to future books from this author.

The best book I've read in many years

Published by Thriftbooks.com User , 22 years ago
I am not a reader of epic fantasy any more, having been disappointed with the current crop of offerings which all seem to be variations on the same theme. I was given this book by a colleague who urged me to put aside my ambivalence and give it a try. This is the first 5 star rating I've ever given a book, and will probably be the last for some time to come.As authors go, Elizabeth Haydon is one of the most accomplished I've ever read. She has a true gift for subtlety and humor; her characters talk like individuals and do not all sound the same. Rather than resorting to the cheap techniques many fantasy writers use, like cliff hanger chapter endings and a constant state of emergency to build action, she understands the stops and starts of storytelling. This is an amazing book, and one of the best in any genre out there.

An Incredible Talent, An Amazing Book

Published by Thriftbooks.com User , 22 years ago
I was fortunate enough to get to read an advance copy of this book, and have been haunting the web, looking for it ever since. I cannot wait for its release in the actual hardcover. Finally the fantasy genre has produced an author who is both a born storyteller and a wordsmith, someone with a feel for legend lore and mythos that harks back to Tolkein [the inevitable comparison, this one actually deserved] or Robert Jordan at his best. Unlike the typical fantasy model of callow young hero up against the forces of darkness, RHAPSODY gives us a totally new construct, a trio of flawed characters whose weaknesses are as appealing as their strengths. Haydon has a true understanding of magic [though I don't think she ever uses the word] and shows it to her readers not only in its traditional form but in every aspect of her world, in the geography, the history, and the people who make it up. She spins a tale that is mysterious and fascinating. When this book came out for review, some of the most respected authors in the field raved about it, but the most interesting to me was Piers Anthony's comment. He said while most of the strong new voices appearing in fantasy these days are male, Elizabeth Haydon is sure to change that. I agree. She holds her own with Jordan, Goodkind, Martin, and the best of them, and brings something new and magical to the genre. I cannot recommend this book too highly, for anyone who loves epic fantasy, or anyone who just loves good writing.
Copyright © 2020 Thriftbooks.com Terms of Use | Privacy Policy | Do Not Sell My Personal Information | Accessibility Statement
ThriftBooks® and the ThriftBooks® logo are registered trademarks of Thrift Books Global, LLC