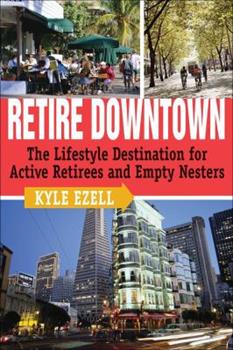 Are you a Ruppie? More and more people are trending toward living downtown. Author Kyle Ezell demonstrates how empty nesters can live out their golden years full of fun and independence in the midst of the city. Ruppies--Retired Urban People--are cropping up all over the country. The populations of city downtowns are exploding nationwide. Also known as active retirees, Ruppies are quickly becoming a big part of that population. Downtown living can...

Glad to be a Ruppie!

Published by Thriftbooks.com User , 15 years ago
Kyle Ezell's book is is dedicated "to the millions of Americans who already know and love downtown living and the millions more who are just discovering it." He invented the term "Ruppies," or Retired Urban People, for people like me who love living in the city, or are at least considering it. According to the book's introduction, Rupies "know the secret for staying young has a lot to do with where people choose to live. Downtown is their fountain of youth." At a luncheon presented by the Clare, the lifetime care community where I expect to move in two or three years, I heard urban planner Ezell speak about his book. I learned that he grew up in a small town with visions of big city skylines in his head, much as I did. Now, he is promoting vibrant city downtown areas as ideal retirement choices. In part one, "Living it up Downtown," the author discusses the many urban entertainment, educational, and volunteer opportunities, and he gives practical advice about how to get around and shop without depending on a car. In part two, "Twenty of America's Best Retirement Downtowns," Ezell discusses the specific advantages of twenty cities, including Chicago, Philadelphia, San Francisco, Seattle, Asheville, Austin (TX), Madison, Providence, Atlanta, Charlotte, Memphis, Miami, Columbus, Denver, Indianapolis, Milwaukee, Chattanooga, Los Angeles, Oklahoma City, and Omaha. This book should appeal to anyone old enough to be considering retirement and flexible enough to consider downtown living a possibility. I was already sold on downtown living, but if I hadn't been, this book might have convinced me!
Trustpilot
Copyright © 2022 Thriftbooks.com Terms of Use | Privacy Policy | Do Not Sell My Personal Information | Accessibility Statement
ThriftBooks® and the ThriftBooks® logo are registered trademarks of Thrift Books Global, LLC