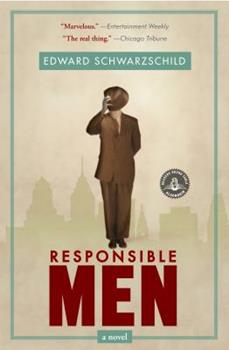 Max Wolinsky comes from a family of mostly upstanding salesmen. On the eve of his son's bar mitzvah he returns home to Philadelphia where he plans to put the finishing touches on a not-so-honorable business transaction and then disappear quietly back to Florida. Nothing, however, goes as planned for this con man with a conscience. Honest, funny, and moving, Responsible Men is a portrait of three generations of men struggling to be good sons and good...

disclaimer: i am biased

Published by Thriftbooks.com User , 15 years ago
but that fact does not negate the reality of this book. here's the deal: smart, big-hearted, complex, utterly and always compelling, funny, sweet, sly, well-paced, thought-provoking, handsome, and damn well enjoyable. who writes novels like this anymore? c'mon, russo! bring it! sometimes writers get attacked personally for their work, so i don't think it's inappropriate to switch up that paradigm and let you, the public, know that all those fabulous book-adjectives do also apply to schwarzschild himself. although i also happen to be in love with its author, the book speaks for itself. thank you and goodnight.

Published by Thriftbooks.com User , 16 years ago
I rarely have the opportunity to read a novelists first work until long after I've read other works. Then, I am frequently disappointed. Schwarzschild, however, has written a novel he will have to live up to in future work. It is populated with memorable (if sometimes not fully explored) characters who defy archetypes, making them that much more human. Structurally, the novel is plot driven. The characters move from scene to scene quickly and each story arc feeds into the central story around the main character, Max's, return to Philadelphia. There's a lot to love about this book. I'd recommend it to anyone looking for a well-paced story populated by interesting characters with a hopeful (but not exactly happy) ending. There's much in this book to make you think about the human condition and to wonder about why we make the choices we make.

Published by Thriftbooks.com User , 16 years ago
I didn't expect to like a book where the man character is a scam artist--but I did. Max Wolinsky returns to Philadelphia to attend his son's bar mitzvah. He also intends to pull off one last scam so he can pay for his aging father and uncle to move to a delux senior center. The story isn't about the scam itself, but about the relationships of the Wolinsky men, their hopes, dreams and mistakes. The book is full of warmth, humor and wonderful characters. As other reviewers have said, it is a book to read again and again. I look forward to more books from this writer.

A book to read again and again.

Published by Thriftbooks.com User , 16 years ago
Ed Schwarzschild's debut novel is one I loved so much I read it twice. Through clear and precise prose, Schwarzschild manages to examine moral struggle on many levels. On the first read, I was swept away by the challenge of a character to make a new start after a dark past. To see a person in such a trap--driven by honorable intentions, yet haunted by a life of dishonor--was truly heartbreaking. Yet the book, on closer examination, also works on familial, historical and philosophical levels. And the more I read, the more I understood its sly humor. This dynamite books defies easy comaprison and must be taken on its own terms. If only all books created, animated and inhabited their own universes the way Responsible Men does.

Published by Thriftbooks.com User , 16 years ago
I wish simply to second the previous five-star reviews, which capture the value and values of this wonderful book. The many characters are insightfully drawn, and the author shows real affection for the main ones, foibles and all. The writing is superb, and the acknowledgments at the end -- to Tobias Wolff, John L'Heureux, ZZ Packer, William Kennedy, and others -- show that the author has had some excellent models. Sometimes first novels are described as "promising," but this one reveals a full-fledged talent. If Schwarzschild can follow this magnificent book with others of equal quality, he will become one of the major figures in American letters.
Trustpilot
Copyright © 2022 Thriftbooks.com Terms of Use | Privacy Policy | Do Not Sell My Personal Information | Accessibility Statement
ThriftBooks® and the ThriftBooks® logo are registered trademarks of Thrift Books Global, LLC