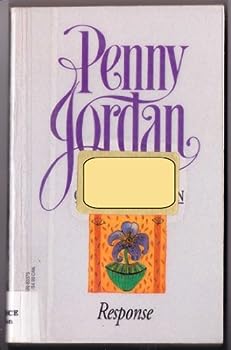 This description may be from another edition of this product. Response by Penny Jordan released on Aug 24, 1984 is available now for purchase.

Published by Thriftbooks.com User , 13 years ago
From the back cover: A traditional wedding. Alexis Stefanides lived by a strict code of family honour. So when he though his sister had been mistreated, he was determined to exact hisrevenge. Sienna became his innocent victim. It was only once the damage was done that Alexis realised he'd been wrong. Before she knew what was happening, Sienna had become his wife! But was this just appeasing Alexis's guillty conscience? He'd certainly never said anything about love. MY THOUGHTS: SPOILERS! Quick synopsis is that the hero believed his sister was raped by the heroine's brother so he decides to exact his revenge - by doing the same. I know, what a bastard right?? Well, he didn't exactly rape the heroine. (but he will later -_- at least mentally/emotionally I guess) The heroine supposedly falls love at first sight with the hero and thinks he too feels the same way, and gives up her virginity to him. After the deed is done, hero turns into a callous bastard and says it was all his plan because of what her brother supposedly done. In the beginning pages, I was a little annoyed at the heroine because she was SUUUUPPPPEERRR harping on about how Kaboom! I am in love with the hero, I want to feel his body, etc. etc. I was like, whaa??? they just met each other few minutes ago!! But I guess Penny Jordan does this to make the readers feel the anguish when the hero reveals he had sex with her/took her virginity for revenge. Thankfully, the heroine had a little bit of a backbone, so good for her!! I am obviously annoyed by the hero. I think he didn't suffer enough for what he did to the heroine. So still early in the story, the hero find out that he was W-R-ON-G (idiot!) He goes to heroine's house, apologizes, heroine is mad refuses to listen to him and tell him to get out, he doesn't so she says fine, I'll get out. Hero follows her calls out to her and unfortunately, gets hit. Heroine is in a coma, and may even need operation so because her brother was unreachable and someone may need to make a decision on operation, a marriage was done hastily 0_0 because a husband would be able to say yay or nay on operation. Thankfully, she didn't need the operation but she wakes up with amnesia. And what does our evil hero do? He doesn't even tell her the true facts of their relationship but proceeds to hide the facts from her! So of course, the heroine "makes a fool of herself" again by making love to hero, saying I love you, etc. etc. just like in the beginning of the story. Duh Mr. Hero, after your acrimonious encounter, you know heroine won't be too pleased. And of course, she gains her memory later, and she is PISSED that once again, she's been made a fool of. Then the hero proceeds to mentally/emotionally force her that heroine still LOVES/WANTS hero, even though heroine says never never. The usual "you know you want me, even though you say no" etc. etc. God hero is such a bastard! Just freaking grovel and say sorry already! Ah, this review is getting too long. Suff

Better than i expected

Published by Thriftbooks.com User , 15 years ago
Very touching story. I admit it was better than I thought, and I look forward to reading more new manga from this new line of romances from darkhorse. WARNING: Avoid the 'search inside' icon though (for however long this option is available). they mixed up the front and back (not realizing it reads in the opposite direction from american books) and gives away the last five pages or so. I was extremely irritated to see that. So anyway, the pink stories are cuter and the purple stories are more dramatic, the comic images are literally printed in pink/purple ink, and are very beautiful. Don't take the higher age rating lightly, this story deals with a lot of very strong rather touchy issues and I have to admit, the story did leave me a little shocked at first so be prepared for that.
Copyright © 2020 Thriftbooks.com Terms of Use | Privacy Policy | Do Not Sell My Personal Information | Accessibility Statement
ThriftBooks® and the ThriftBooks® logo are registered trademarks of Thrift Books Global, LLC