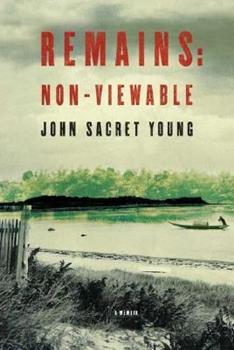 When John Sacret Young's cousin, Doug was killed in Vietnam, Young learned that the remains of every Vietnam casualty fell into one of two official categories: Viewable or Non-Viewable. He also discovered that such categories applied to how his New England family faced its own history. This compelling narrative is the haunting story of a man coming to terms with himself, with his family's past, with what he knows and will never know, and with his...

Published by Thriftbooks.com User , 16 years ago
It's hard to remember that it's been so long since the Viet Nam war. Half the people in the country won't remember it at all. If they were born, it was just something that the old people were concerned about. Viet Nam was just something that appeared on the news, and who wanted to watch the news anyway. For the rest of us, even the title is disturbing -- Remains: Non-Viewable was marked on too many government issue caskets that came back flag draped. Even if it has been 36 years, the impact of John Young's cousin Doug coming back in a casket is still fresh in the family's collective mind. The results of one young man's being killed affected the family in many ways. This is the story of that affect on four men: John Young himself, his father, his uncle George, his cousin Doug. The frightening part of this is that the same kinds of affects are now just starting in the families of the young men in Iraq.

Published by Thriftbooks.com User , 16 years ago
This is a memorable book. It reads like a close friend sharing from the heart on a long summer evening. Tales from childhood, interwoven with grief and loss in later years. We see a family, connected at arm's length, unable to console each other when the worst happens, Doug, son, brother, and cousin, is killed in Vietnam - `friendly fire'. Like an underground earthquake, the devastation ripples through the family. This is a New England family, and a New England story. The stoicism passed down through generations, silences the family at all levels. The author dares to speak, about loss, love, lust, alcoholism, anger, avoidance, grief, and the ever-enduring ties to family. There is something for everyone here - personal and professional stories, from Hawaii, to Massachusetts, to Vietnam and Hollywood. A great read.
Trustpilot
Copyright © 2022 Thriftbooks.com Terms of Use | Privacy Policy | Do Not Sell My Personal Information | Accessibility Statement
ThriftBooks® and the ThriftBooks® logo are registered trademarks of Thrift Books Global, LLC