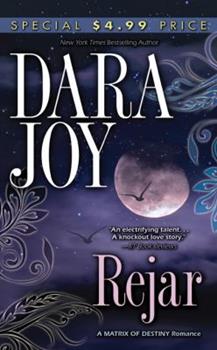 (Book #2 in the Matrix of Destiny Series)

There is only one thing a woman can think of when looking at a man like him. Sex. But Lilac never guesses that bringing a stray cat into her home will soon have her stroking the most wanted man in 1811 London.

Published by Thriftbooks.com User , 18 years ago
I think this book got a BAD RAP!!!!!!! I REALLY enjoyed this book!!!!!!!!! I loved the relationship between Lilac and Rejar! It was only fitting that he find someone who wasn't falling at his feet. I loved the embroidery scene!!! I think all the women who found the intensity of certain scenes upsetting need to review them again and compare them to other scenes in say (early Johanna Lindsey). There were NO rape scenes in this book!! Rejar was just very intense in the way he made love. He could not hurt her... that would have meant hurting himself. His whole purpose when he made love was to gain the pleasure being reflected back from his partner.

Published by Thriftbooks.com User , 18 years ago
On the way to a tea party, Lilac Devere and her Auntie Agatha are shocked when a flash of light, a booming crash, and a large black cat with two different colored eyes, one fiery gold, one ice blue, suddenly appear in their coach. Lilac is immediately taken with the pretty kitty, and vows to take it home with her if it's still here when they get back from the party. Little does Lilac know, the black cat is not just a cat, but a man who can transform into a cat. A Familiar to be exact, who is from a future time and a different dimension. Rejar knows he's been sent here for a reason, so he decides to stay in Ree Gen Cee Ing Land and find out why he's here. Lilac brings her kitty into her home to keep. Suddenly, Lilac starts having wonderful dreams about a sexual, NAKED man. Rejar knows he can't stay in this world as a cat, so he decides to tell people he's from a faraway land so no one can check his story. He tells people his name is Nickolai Azov and that he's a prince from Russia. When Lilac meets the Prince for the first time, she's shocked to find that it's the same sensual stranger from her dreams. What she also didn't expect was to see the Prince who had two different colored eyes, an eye of fiery gold, and an eye of ice blue! Rejar decides then and there that he will marry the beautiful Lilac. But before he can do that, he wants Lilac to be used to him, hence the nighttime visits. There are some advantages of being able to do this, and when he discovers a kitten-shaped birthmark on Lilac's inner thigh, he uses it to his advantage. When he tells Auntie Agatha about the birthmark, she thinks he has compromised her niece, and proclaims that they will be married days later. Lilac's reaction was outrage, to say the least. She was very opposed to the marriage, which she knows the obnoxious Prince Azov has tricked her into. When the minister asks her 'Do you take this man...' she refuses to answer. Rejar finds this vastly amusing, and, having telepahic ability, sends her a message asking her if she wants him to stop the cerimony. When she shouts "Yes I do!" the minister pronounces them husband and wife, since no one else heard the thought. Lilac once again realizes she's been tricked. This results in a marriage of hilarious escapades. Another good thing about this book is that we revisit with characters form the previous novel "Knight of a Trillion Stars", starring Lorgin, Rejar's brother, his wife Adeeann, and a new addition to the family! We also meet again with Traed, who shows up to 'pester' our hero the day after his wedding, and Yaniff, an ancient wizard who wants Rejar to join the Alliance, a group of extraordinary wizards on Rejar's home planet. This book was a story of wild contradictions, explosive sexual encounters, a heroine with just the right amount of stubborness and laughter, and a hero with the biggest heart a hero could have. Definitely a keeper. ;)

Purrfect follow-on to a purrfect book

Published by Thriftbooks.com User , 21 years ago
Once again Dara has writen another purfect book in REJAR. He is the most provocatively sexy man/cat. Lilac is absolutely purfect for him. The sex scenes(of which there is a lot) are red hot. It wears you out just reading them. Aunt Agatha is a darling. She would be ideal for Yaniff. Some readers have already sugested this as a future story in the series and I think they are right. Traed makes another welcome return in the book which is wonderful. I can't wait for his story which is 4th. in the series. Gian Ren's story is next(3rd). I have just finished it and it is another wonderful story.Please Dara write Traed's story fast, we can't wait for it. Well done on another great book.

Published by Thriftbooks.com User , 21 years ago
I thought this was a wonderful book. A very well written and interesting novel like the rest in the trilogy. It is about a Femar ( a male that can turn into a cat) and a young woman that finds him as a cat and learns that once she took in the cat a strange, yet exotic man appears in her life. Very seductive and sexy Rejar invades her mind and body, doing anything to make her his. he uses his sensuality and prowless in bed to seduce her. Read this book, and learn what other "special" powers that rejar is of capable. It was a very good book, and the plot never ceased to bore me like many others do.
Copyright © 2020 Thriftbooks.com Terms of Use | Privacy Policy | Do Not Sell My Personal Information | Accessibility Statement
ThriftBooks® and the ThriftBooks® logo are registered trademarks of Thrift Books Global, LLC