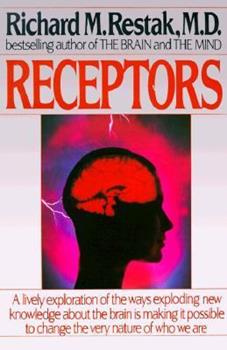 What if there were a pill that could change you from an introvert to the exuberant extrovert you always wanted to be???A capsule to make you more assertive, creative, or intelligent???What is you could "design" your own brain???Who would you be? Only a few years ago such possibilities seemed the stuff of science fiction, but in today's laboratory remarkable new advances in brain research are making such transformations a reality.??In Receptors ,??famed...

Published by Thriftbooks.com User , 16 years ago
Restak's RECEPTORS is a deep breath of fresh air. His metaphors using the car, the ignition key and the filters of a camera brought this difficult material within the reader's grasp. The author really tried to communicate his ideas instead of just sounding off with jargon. Although he was talking about very technical material, receptors in the brain, he never lost sight of the big picture. What is the big picture? That the human brain is nothing but an information processor. Molecules of all stripes, nucleic or amino acids, have but one purpose -- to transmit information, genetic or life sustaining. Or to use Restak's own words, "But neurotransmitters and their receptors also mirror the internal and external environment and thus serve as symbols and signs." (P. 31) When this glut of current brain research is analyzed and digested it will all show what Restak believes -- the brain can only reflect what the universe offers up. No matter what the language, whether genetic DNA, English or digital zeros and ones, it all boils down to molecular shapes and the chemical- electro-magnetic fields in which these shapes float. His appreciation that the brain is no different from other shapes of matter, concerns of physicists, should be commended. He points out that both thoughts and emotions result from chemical processes that either expand or don't within the brain. If an infant is missing one gene the tyke may spend all his/her living days staring into vegetative space. So, like all matter in the universe, the brain exists in the sea of energy studied by quantum mechanics. Yes, the conscious mind benefits from the probabilities of its own existence but nothing is for sure. What propels the brain forward is an unseen force, called by Richard Dawkins the selfish gene, which insures man's survival. The individual is only a passenger aboard this survival flight.

How Can This be Out of Print?

Published by Thriftbooks.com User , 19 years ago
"Receptors" by Richard M. Restak, M.D., with a section for further readings, is an excellent text about the then new brain research (1994), when both doctors and scientists were beginning to discover and disclose specific actions of the brain's neurotransmitters and the broad effects on the body. Dr. Restak explains in technical, yet easy-to-understand terminology the critical functions of dopamine projection, serotonin projection, in addition acetylcholine projection in the brain--and what it all means to you and I. Part I covers subjects such as "Disordered Thought, Disordered Molecule" (Chapter 1), and chapter 3, "Magic Intoxicants". From there, he moves through other important material to "Clasping the Neuron" and "The Anatomy of Melancholy" at Chapters 6 and 7, respectively."At every level these messengers and receptors underpin the behavior by which we define ourselves. This holds true for everything from the twitch of an isolated muscle cell to the formulation of a unified field theory in physics.", our author explains on page 29. "The brain's marvelous performance is possible because of its organization." I particularly enjoyed the elegantly simply diagrams of a neuron and a synapse on page 20. Part II deals with drug interactions and brain coding and decoding. "Russian Dolls" at Chapter 8 details this nicely, since "At each of these levels--molecules, synapses, neurons, networks, maps, systems, and the brain as a whole--information coding and decoding reflect information from all the other levels." (page 92). From "Good Drugs, Bad Drugs" at Chapter 10, through "Mother's Little Helper" and "Mr. Guinea Pig" at Chapters 13 and 17, Dr. Restak succinctly describes historical personas and their discoveries, and how they evolved into what more we understand today.It is clear that this book was written from a sincere love of trade. I can tell Dr. Restak loves his profession (a neurologist and neuropsychiatrist), and it is apparent this book wasn't rushed to the marketplace as a piece paid by the word. There really is no filler here; all 221 pages are neat and clean, educational and provide a solid basis of neurology for the layperson as well as Dr. Restak's colleagues. It allows us to understand what we put into our bodies ultimately affects our moods and our chances for living longer--or not. Our author has a real gem here, clearly and I won't be able to take it all in on one pass from my library copy. I'll need to take a seat in the coffeestore lounge, where I can enjoy a double iced mocha and devote my reading time to "Receptors", as it duly deserves. In fact, I need to click this book on my shopping cart right now.

Published by Thriftbooks.com User , 22 years ago
I am an alchohol/drug counselor and I believe there is much going on at the neurological level when people attempt to recover from addiction. I found this book relatively easy to understand and it gave me much needed support to my ongoing search for a biological theory of addiction and treatment.

Well written and presented, even though material is complex

Published by Thriftbooks.com User , 23 years ago
I felt this book was well done. Without inundating the reader with complex jargon, Restak explains the major breakthroughs and advancements in receptor function, ultimately arriving at the understandings and theories of today. Though I feel that a basic knowledge of this area would be helpful and might expediate ones progress through the book, it is not necessary. Overall a good overview of neurochemistry and neurobiology.
Copyright © 2020 Thriftbooks.com Terms of Use | Privacy Policy | Do Not Sell My Personal Information | Accessibility Statement
ThriftBooks® and the ThriftBooks® logo are registered trademarks of Thrift Books Global, LLC