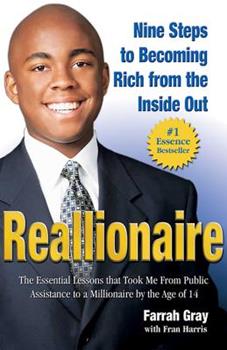 Reallionaire: Nine Steps to Becoming Rich from the Inside Out

Farrah Gray is no ordinary teenager. He wears a suit and tie; he has an office on Wall Street and another one in Los Angeles . . . and he sold his first business at the age of 14 for more than a million dollars. He invested that money in a partnership with Inner City Broadcasting, one of the most prominent African-American owned businesses in the country, and now is heading the relaunch of their signature magazine, InnerCity. According to People magazine,...

A rousing and inspirational read!

Published by Thriftbooks.com User , 16 years ago
Even though he is a young man, Farrah Gray writes like an "old soul." His message is clear, his beliefs are strong. When asked to perform at a higher standard there are many who ask: "Why me?" Those who read this book will learn a better response is: "Why not?" Reginald V. Johnson, Author, How to Close More Customers

Step by STEP Guide to WEALTH, If really READ IT, not just read it

Published by Thriftbooks.com User , 16 years ago
The book first is inspirational. The story Farrah presents is very unique. A must read for all, not just young people. The story he tells is almost unbelievable, he will show how not to limit yourself. He lays out the adversity that people will face in business whether you are young or old. "Unless your dad is Bill Gates ". Let me also tell you I read this book in 3 days. Finished book earlier today. His writing style is very easy to read and it flows. If you have read the travelers gift it has same structure as that. Nobody in the reviews has talked about the exercises that he has in the book. The Book is only half you just "read it". The way he took control of his life is amazing at such an early age. He had mentor to guide him, but Farrah did everything for himself. Everyone has access to mentor in some way shape or form. Most people will not take action, which is the difference between Farrah. He done the same thing many people have done, because success principles are all the same. I honestly believe, there could be more Farrah's if young people were educated, and parents gave there child room to blossom. The thing with most children is there is no burning desire in their hearts, because their Fridge at home is filled, they don't to worry about lights getting shut off. He talks a lot in the book about living your life with integrity and everything will come back to you tenfold. BOTTOM LINE YOU CAN'T READ THIS BOOK, if you have a pulse and not get something out of it.

The first 4 letters say it all...REAL

Published by Thriftbooks.com User , 17 years ago
I read the book (which I completed in a week) and had to just sit and think for a while once I put it down. Farrah Gray is amazing. I have also seen him speak and was absolutely blown away. He is amazing, not just because he is a millionaire (the youngest SELF-MADE millionaire I personally have ever heard of outside of entertainment, sports or family inheritance or trust fund) but because he is from the same humble origins as many of us. He survived and overcame the obstacles associated with the inner city environment he grew up in. He is amazing because money has not deterred or distracted him from his focus on family and family values. This is evident in his consistent references in the book to his mother, his grandmother and other family members he has learned from and loves dearly. Mr. Gray is amazing because he has made it his business to inspire others with his story and lessons he has gleaned along his own journey. Anyone who heads up a venture capital fund, a food company, consults the U.S. Department of Commerce and sits on several boards (United Way, Las Vegas Chamber of Commerce) and buys a magazine (Inner City) by the time he is old enough to drive has pretty much caught my ear and has worthwhile things to say. Mr. Gray is more than a "local boy" who "does good". He is that local boy who wants to help others do better than they have ever imagined possible. I am impressed by Mr. Gray because far beyond creating one of these currently prolific and ubiquitous "how-to" or "step-by-step" manuals on how to "get rich", he has offered principles on how anyone from a child to an adult or an elderly person may realize their God-given talents and tools in order to accomplish what they dream of. I have purchased several copies and plan to purchase more so that I can give them to young people I know. At 20 years old, he is someone our youth can look at and see possibilities and potential in themselves. The book is the average price of a meal at lunchtime. The message of inner richness toward acheiving personal, financial

Published by Thriftbooks.com User , 17 years ago
I cannot even begin to explain how his story touches me! To just imagine that he came from the hood, Chicago's hood at that, and has made for himself in his short life something that many have not accomplished in their lifetime is nothing short of amazing. I mean really, a millionaire at 14 and a multi-millionaire at 20 now and is still pursuing many business ventures is just unheard of. Many young men his age have been in his same situation growing up and many of them have decided to go down the path of emulating gangster rappers and their lives of violence, drugs, and mayhem. He even says in the opening of his book that if you believe in statistics that he should either be in prison or dead. However, Farrah, with his belief in self and that all things are possible, defied all of the negative influences that he was surrounded by and used his god-given talent and business acumen to take him out of the ghetto and to blow corporate America away. And even more touching is the sincerity and "down-to-earth"-ness that he exudes throughout his wonderful book. Many people, young and old, of all ethnicities and backgrounds, myself included, I believe, can take a page from this book and really do amazing things with their life!

Reallionaire Is A MUST Read!!!!!

Published by Thriftbooks.com User , 17 years ago
I was truly impressed with Mr. Gray's writing style. It blends the personal develoment tenets of Kiyosaki, John C. Maxwell, Napoleon Hill and Jim Rohn beautifully in a way that can be easily understood and duplicated by young and old readers. It is a very inspiring and thought provoking guide to living your life with passion, purpose and faith in God and your God-given abilities. I recommend this book to everyone who is serious about personal development.
Trustpilot
Copyright © 2022 Thriftbooks.com Terms of Use | Privacy Policy | Do Not Sell or Share My Personal Information | Accessibility Statement
ThriftBooks® and the ThriftBooks® logo are registered trademarks of Thrift Books Global, LLC