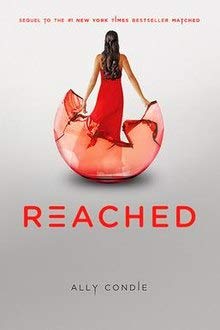 (Book #3 in the Matched Series)

The thrilling conclusion to the New York Times Bestselling Matched Trilogy Perfect for fans of 1984 , Brave New World , Black Mirror , and The Handmaid's Tale . Cassia's journey began with an error, a... This description may be from another edition of this product.

The book was moldy

Published by Devastated , 1 year ago
I got the acceptable version of the book because I’ve never had a problem with that before but when the book came it had mold on the cover and on the slip cover I had to Disinfect it and make a new cover for the book. The cover and pages also had water damage and cover would not sit flat one side of it was busted

Published by NepheleFairy , 1 year ago
I was pretty okay with the condition it came in at FIRST, but then, when I was reviewing my order I saw that it was suppose to be Like New. It wasn't. I've never had an issue before with any of my orders except for one time where half my hardbacks came in without dust jackets. I'm normally not too nit picky with damages but for Like New, I was expecting it to be like what the condition says, Like New. I think maybe there was mistake with this one but I also know that there should be a little more consistency with book conditions.

Published by joam , 2 years ago
this was very upsetting. I received this book it was suppose to be in very good condition. the book jacket was ripped and there is a coffee stain on the hard cover.

Published by brit , 3 years ago
This is the third and last book in the series and it was so good! The books are about what society could look like after our current society/world falls apart. It follows the story of three teens and how important their roles become in taking down the society and trying to make a better world.

Published by Thriftbooks.com User , 4 years ago
I do not typically read series books and I read all 3 of these. It is well written but this one had some drowning points where it was hard to get through, thankfully they were only a couple chapters.
Trustpilot
Copyright © 2022 Thriftbooks.com Terms of Use | Privacy Policy | Do Not Sell or Share My Personal Information | Accessibility Statement
ThriftBooks® and the ThriftBooks® logo are registered trademarks of Thrift Books Global, LLC