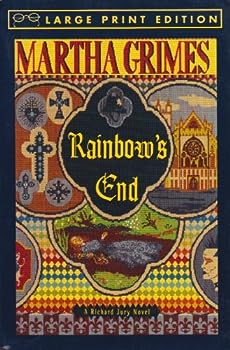 (Book #13 in the Richard Jury Series)

"Once again, Grimes hooks her readers with the engaging Jury and friends and with skillful tucking of hints into unexpected corners." --Publishers Weekly (starred review) When three women die of "natural causes" in London and the West Country, there appears to be no connection--or reason to suspect foul play. But Scotland Yard Superintendent Richard Jury has other ideas, and before long he's following his keen police instincts all the way to Santa...

Published by Thriftbooks.com User , 17 years ago
This is the 13th Jury and Plant mystery penned by the brilliant Grimes. Once again read by the amazing Tim Curry, Rainbow's End takes up just a "few weeks" after The Horse You Came In On ended. The newest case for Scotland Yard Chief superintendent Richard Jury, sees Jury again on the wrong side of the Pond. He is there to dismiss or confirm similarities among three mysterious deaths, two are British women - one dies in Exeter Catherdral and the second in the Tate Gallery. The Third was an American, one Angela Hope, a Santa Fe silversmith, while visiting the ancient hill fortress Old Sarum. He is not able to dismiss the threads that tie the three deaths together, but becomes convinced, since all three had recently been in New Mexico, USA, they are be connected. While Jury does the foot work in the US, he has set Melrose Plant to tracking down Lady Jenny Kennington. She vanished -literally - while at Straford-on-Avon.Once again Grimes gives you a bang-on murder mystery with sleuth Jury hot on the trail of clues, and Melrose showing, as an amateur, his is a nifty investigator, too. Grimes humor shines, and is brought to life by Curry's wonderful reading. Sheer perfection from start to finish.

Published by Thriftbooks.com User , 20 years ago
This is the first book I have read by Martha Grimes. I have to say she is a very good writer. "Rainbow's End" got me hooked from the very beginning to the end. This book has a wonderful plot and the characters are believeable and hilarious! The main character is Richard Jury and he has a suspicious beleif that these three "natural" deaths are connected and they were not "natural causes." He travels from Stonehenge, England to Sante Fe, New Mexico and discovers...well you read it for yourself!!! I reccommend this book for any avid mystery reader. You will love it!

Published by Thriftbooks.com User , 22 years ago
This mystery, another in the installment of books featuring Inspector Richard Jury is quite fascinating. What could an American woman found dead at Old Sarum, a wealthy British lady found dead at the Tate Gallery in London and a second English woman found dead at Exeter Cathedral have in common? At first glance not much, except that they're all dead.Inspector Jury discovers connections to New Mexico, and travels there to discover what else connected these women. Without giving any more of the plot away, it's quite an interesting story with a few interesting twists and turns.Since I listened to the abridged audio cassette, I must mention Tim Curry's delightful performance. He gives distinct vocal characterizations to all the players in the story, and keeps you totally engrossed in the story. The only complaint I have is that a secondary plotline is not abridged very well, and its wrap up leaves a lot to be desired.
Copyright © 2020 Thriftbooks.com Terms of Use | Privacy Policy | Do Not Sell My Personal Information | Accessibility Statement
ThriftBooks® and the ThriftBooks® logo are registered trademarks of Thrift Books Global, LLC