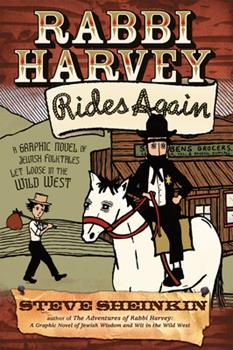 Rabbi Harvey is Back with Ten Hilarious New Adventures In this follow-up to the popular The Adventures of Rabbi Harvey: A Graphic Novel of Jewish Wisdom and Wit in the Wild West , the Rabbi returns to the streets of Elk Spring, Colorado. Part Wild West sheriff, part old world rabbi, Harvey protects his town and delivers justice, wielding only the weapons of wisdom, wit, and a bit of trickery. These adventures combine Jewish and American folklore by...

For any reader who wants a bit of an offbeat blend

Published by Thriftbooks.com User , 13 years ago
A strange way of moonlighting - serving as both a Rabbi and a Sheriff and mixing both freely and skillfully, Rabbi Harvey is an intriguing character indeed. "Rabbi Harvey Rides Again: A Graphic Novel of Jewish Folktales Let Loose in the Wild West" is a compilation of tales following this Rabbi Sheriff as he dispenses both justice and Talmudic wisdom onto the other various characters he encounters in his travel. A deftly mixed graphic novel consisting of the ingredients of old world religion, American and Jewish Folktales, and witty creativity, "Rabbi Harvey Rides Again: A Graphic Novel of Jewish Folktales" is highly recommended for community library graphic novel collections and for any reader who wants a bit of an offbeat blend.

Another Rabbi Harvey book? Such a simcha!

Published by Thriftbooks.com User , 13 years ago
In his second Rabbi Harvey collection, Steve Sheinkin continues to transplant tales from the Talmud and the Hasidic tradition into a wild, wooly and charmingly haimish vision of the Old West. Sheinkin has sharp wit and delicious comic timing, and his images, with their folk-art-done-on-an-early-Mac aesthetic, are clear, engaging and wonderfully offbeat. Admirers of wisdom literature from any tradition will find much to delight here, and may well be prompted to seek out the original sources of these surprising and insightful stories. Authentically great stuff.

Published by Thriftbooks.com User , 13 years ago
Absolutely charming with a non-stop supply of humor as sly as the Rabbi's wisdom. Harvey is an irresistable character and the author's sense of fun is contagious. There's a great deal here to enjoy whether you're a fan of Rabbis, Westerns or a simple good time.

Published by Thriftbooks.com User , 13 years ago
In this second graphic novel of Wild Western tales Rabbi Harvey dispenses wisdom and justice to the fictional shtetl of Elk Spring, Colorado, and surrounding areas, taking on Bad Bubbe, Big Milt and Wolfie Wasserman, and even the wind with his mind instead of a gun. The illustrations evoke the Old West and are simple enough to avoid detracting from the story. There is no cartoon nudity in this volume, although he does get down to his underwear a couple of times. I highly recommend this funny, funny book to anyone of any age, whether or not they have a religious persuastion of any sort. Those with Jewish literacy will enjoy seeing the old Jewish folklore and rabbinic tales in such an incongruous setting, but everyone will appreciate the wit of the stories.
Copyright © 2020 Thriftbooks.com Terms of Use | Privacy Policy | Do Not Sell My Personal Information | Accessibility Statement
ThriftBooks® and the ThriftBooks® logo are registered trademarks of Thrift Books Global, LLC