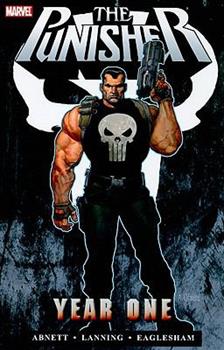 (Part of the Sarjakuvalehti Series, Punisher: Miniseries Series, and Punisher: Year One Series)

by Dan Abnett and Andy Lanning

We've known for years about the deaths of Frank Castle's wife and children, but now we see Castle himself hours later, when his grief and rage were at their freshest. To the police, he's a lead. To a reporter, he's a story. To the mob, he's just one more loose end.