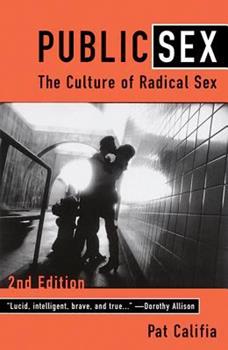 A chronicle of the radical sex movement in the United States covers sexual practices, gay and lesbian activism, feminism, censorship, and other important issues. Original.

Published by Thriftbooks.com User , 15 years ago
This books collects many of Patrick Califia's writings from the late 1970s through the early 90s and is a real jewel of a book. I recommend the newest edition, publish in the early 2000s that includes a new introduction and new essay on the most controversial topic in the book that is well worth reading for it shows the evolution of Califia's thought on an immensely contentious subject. Besides that essay, there are numerous others that the term 'eye opening' would be an understatement in describing. Her promotion of a sex-positive feminist and queer viewpoint is always a joy to read and her essays on lesbian sexuality, the empowering aspects of S/M, on the persecution and shaming of prostitutes by the Right and the Left, and many other works are all a breath of fresh air. Califia is definitely to be commended for fighting to put the sex back into sexuality, and in this increasingly prim, proper, and puritanically-minded society of ours, that is a blessing. Califia takes on virtually all the great bugaboos of the more puritanical, embourgeoisized, and authoritarian elements of the feminist and LGBTQ movements which serve, in all seriousness, as distractions that prevent liberatory-minded feminists and queer activists from the pooling our resources from the urgent task of fighting for and building a more free, democratic, and substantively just world.

Classic republished plus some

Published by Thriftbooks.com User , 18 years ago
If you have an earlier printing of this collection do not buy this version, just borrow it for the new essays. Most of the essays were earlier published in journals such as "The Advocate". The essays themselves are unchanged but the introductions are rather defensive in nature, reflecting the political climate in which this book is published. The essays are organized into their sections and within each section by the year their were written. This gives us a great sense of how Califia's own views have changed through the years.

Published by Thriftbooks.com User , 21 years ago
My first reading of Pat Califia's work was in PoMoSexuals, a collection of essays where she was one of the contributors. Her writing was so eloquent and coherent that I sought out her books. In this collection of her essays, Califia challenges the muddled thinking and hyperbole so prevalent among feminists (especially Andrea Dworkin) about pornography and sexual "deviance." Califia's knowledge and arguments are stated clearly with humor and compassion. Many quotable quotes such as: "It is true that pornography is marketed for a male audience, but there are women who enjoy it. I do not think it sufficient to say these women are brainwashed by the patriarchy, since women are socialized NOT to use erotic materials." (p. 109)[about teen interest in sex] "Any attempt at independence and autonomy by a young person is seen as wickedness, rebellion, and evil." (p. 80) And: "It is adult outrage and shame over such perfectly normal activities that give young people the idea that there's something wrong with sex or nudity, and intimidates them out of asking the questions they need to explore their own erotic natures." (p. 81)"Instead of praying for extraordinary talents, we should pray for the good sense to fully use the talents we have been given." (p. 259)I found this book informative and very thought provoking and recommend it for anyone with strong feelings, pro or con, about the rights of sexual minorities.~~Joan Mazza, author of Dream Back Your Life; Dreaming Your Real Self; Things That Tick Me Off; and Exploring Your Sexual Self.

Published by Thriftbooks.com User , 24 years ago
at one point in Public Sex, Pat Califia says that "you can still be a sex radical even if you prefer to get off in the missionary position and still believe there are only two genders." it's an important thing to remember. in this collection of essays, Califia explores -- over a period of about a dozen years -- issues of sex, politics, and where the two intersect (usually by bolstering the latter at the expense of the former). she explains why sexual freedoms and sexual responsibility are rights we all deserve, though many of us don't get them. she confronts the p.c. "feminist" positions on issues like pornography, prostitution, and S/M, and her well-thought-out points will make any reader pause. Public Sex changed my life, making me more aware than i had ever been of the sheer *perversity* of the strictures on sexual behavior in our culture today. the more people read this book, the better our chances of gaining those liberties that all of us deserve.

Deviance and brains -- Pat's got it all.

Published by Thriftbooks.com User , 24 years ago
Finally, for everyone who's looking to escape the doom'n'gloom, neutered, politically correct world of feminism, there's Public Sex. When I first found this book, I was thrilled to find writings with an intellect, common sense, and a libido coming from one very brave and defiant woman. I gave some of the essays from this collection to my Feminist Theory class, and several women said that Califia's arguments changed their views in new and surprising ways. Read this if you can deal with the idea of a politicized (but never politically correct) sex radical, certainly. More importantly, read it if you CAN'T. You may be surprised at how you feel when you're done. Your intellect -- and more -- may be aroused in a whole new way...
Trustpilot
Copyright © 2022 Thriftbooks.com Terms of Use | Privacy Policy | Do Not Sell My Personal Information | Accessibility Statement
ThriftBooks® and the ThriftBooks® logo are registered trademarks of Thrift Books Global, LLC