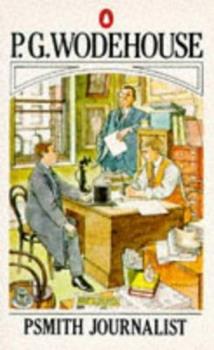 (Book #3 in the Psmith Series)

THE conditions of life in New York are so different from those of London that a story of this kind calls for a little explanation. There are several million inhabitants of New York. Not all of them... This description may be from another edition of this product.

Published by Thriftbooks.com User , 14 years ago
This book is an absolute laugh. Psmith is always unique but I really loved this one. My favourite is Mike and Psmith. I'm a wannabe journalist so I really sympathized with Psmith's need to get himself a good story. Buy the omnibus comrade, you'll never regret it.

Published by Thriftbooks.com User , 17 years ago
Readers of Psmith's previous adventures (Mike and Psmith, Psmith in the City) will appreciate Psmith's adventures in darkest New York. Wodehouse limbers up his dese, dems, and doses as he introduces us to "Bat" Jarvis and his gang of lowlifes, with whom Psmith interacts in an amusing manner-- even, at times, becoming strenuous in his defense of justice and his own corpus! Psmith bonking miscreants over the head with a stick? Yes! Psmith disarming pistol-wielding evil-doers? Yes! And along the way, much of the artful and absurdly witty banter that Psmith and Wodehouse specialize in is served up in heaping dollops. Enjoy!

Psmith at large in New York

Published by Thriftbooks.com User , 19 years ago
This isn't Wodehouse's funniest novel, but it is definitely the most exciting, with a more dramatic plot than usual. Psmith takes on a crooked slum landlord, hounding him through the pages of 'Cosy moments' a bland family paper that he has transformed with the help of assistant editor Billy Windsor. Psmith is a wonderful character, languid, frivolous and comic on the surface, tough man of action underneath, a modern Pimpernell. there are some wonderful comic characters, especially Bat Jarvis, the tough gangland boss with a passion for cats. I wish Wodehouse had written more about Psmith, he could have been the hero of a whole series of thrillers, with Mike Jackson as his stalwart sidekick. Instead Wodehouse married him off in the next Psmith novel (Leave It To Psmith) and we hear no more of him, what a pity!

Comic Feast for any intellectual!

Published by Thriftbooks.com User , 23 years ago
This sharp and witty book is a must for any intellectual humanoid! The language is simply divine! It is a younger Frasier Crane working a Ph.D in linquistics of English, full of energetic laughter and irony.

Published by Thriftbooks.com User , 23 years ago
This was the first Psimth book which I read, and though there was a bit of the real world, and sentimental stuff too (unlike the Jeeves' series), I thouroughly enjoyed it. A must read for Wodehouse fans.
Trustpilot
Copyright © 2022 Thriftbooks.com Terms of Use | Privacy Policy | Do Not Sell My Personal Information | Cookie Preferences | Accessibility Statement
ThriftBooks® and the ThriftBooks® logo are registered trademarks of Thrift Books Global, LLC