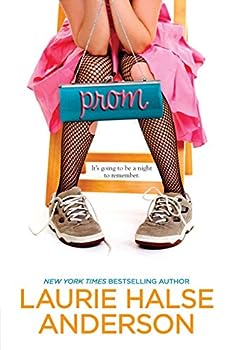 Containing everything she's known for, this latest novel by the award-winning author of "Speak" and "Catalyst" describes the angst surrounding an American teenage rite of passage: the senior prom. Philadelphia high school who doesn't care about the prom. It's pretty much the only good thing that happens there, and everyone plans to make the most of it, especially Ash's best friend Natalia, who is the head of the committee and has prom stars in her...

Published by Thriftbooks.com User , 15 years ago
tHIS BOOK IS A WONDERFUL BOOK. THE MAIN CHARACTER ASHLEY PLAYS A GOOD ROLE IN THE BOOK AND HER BEST FRIEND NATALIA. THE STORY IS ABOUT A GIRL NAMED ASHLEY AND HER BEST FREIND NATALIA. ASHLEY ENDS UP SAVING THE PROM THAT NATALIA REALLY CARES ABOUT.tHE MONEY FROM THE PROM GETS STOLEN FOR THEIR SCHOOL BY ASHLEY'S MATH TEACHER THOUGH EVERY ONE THOUGHT THAT THE COACH REALLY STOOLE THE MONEY, BUT THAT WASN'T THE CASE. aSHLEY HAS 3 BROTHERS AND OF COURSE A MOM AND A DAD. hE MOM ENDS UP LEAVING BECAUSE THE HOUSE IS A MESS. tHE KITCHEN WAS THE WORST PLACE EVER. ASHLEY HAS SO MANY MIRALCLES ONE WAS SHE RAISED HER HAND AND END UP GETTING OUT OF HALF OF HER DETENTIONS. SHE WAOKS AT A PIZZA RESTURAUNT AND DOESN'T REALLY WANT TO BUT SHE WANTS TO GET MONEY SO SHE HAS TO WORK THERE. HER BOYFRIEND LOOKS AND DOES ALOT OF THING SUSPICIOUS THINGS AND ASHLEY THINKS THAT MAYBE HER BOYFRIEND IS CHEATING ON HER OR DOESN'T WANT HER BECAUSE HE CALLED ASHLEY AND TOLD HER TO MEET HIM AT HIS HOUSE BUT WHEN SHE STOPS THERE HIS SISTER IS ONLY THERE WITH HER DAUGTHER. aSHLEY ENDS UP GOING TO THE PARK AND HER AND HER FRIENDS GET DRUNK AND TRIED. AFTER ALL THIS IS DONE THEY FINALLY HAVE A PROM NOT AS BIG AS THEY WANTED BUT IT WAS REALLY NICE. I WOULD DEFINITELY RECCOMEND THIS BOOK TO EVERY ONE THEIR IS BOYS OR GIRLS. I WOULD EVEN RECCOMEND THIS BOOK TO EVEN ADULTS OR GRANDPARENTS. tHIS IS A VERY AWSOME BOOKS.

Published by Thriftbooks.com User , 15 years ago
I definitely liked this book, I saw so much of myself growing up in this book, other than being poor. It was great especially since I was raised the next state over from the book. This book is definitely for an girls who feel "normal" (whatever that is these days). Ashley is truly a sweet girl, and surely tried to make the most out of what she had, a lesson that can't be shown enough to today's youth.

Published by Thriftbooks.com User , 16 years ago
A Cinderella story, though not quite as straightforward as the fairytale. Ash is a 'normal' kid, planning to move into a teeny-tiny apartment with boyfriend TJ after graduation rather than going to college, works a job which involves dressing up as a rat and dealing with obnoxious customers, and is going to have to attend detention every day between now and the end of term if she wants to graduate. She isn't remotely enthused about the upcoming prom and thinks it's pretty stupid but when disaster strikes and she finds herself getting involved, she might just get a magical night of her very own. This is sweet and realistic and even though it's quite different to Catalyst or Speak, still brilliant and extremely readable.

Great Story with Lots of Fun!

Published by Thriftbooks.com User , 16 years ago
Prom is very different from Anderson's earlier books, but it is warm and funny and very well-written. Ashley is a regular senior in high school (notice I tried not to say she's "normal"--Anderson does that enough) who couldn't care less about prom until her best friend Natalia drags her onto the prom committee at the last moment. Ashley is cynical about everything, including her boisterous family, and this attitude carries over into her school work and in particular the prom. Ashley's boyfriend TJ foresees the two of them together after her graduation in a dump of an apartment with going-nowhere futures. As the story goes on, of course Ashley begins to realize she really has more to offer than just a counter job in a store, tho she never loses her edge in expressing herself. At times this book is laugh out loud funny and at times it provokes the reader into anger but it is never boring. The sex is implied, not graphically stated, and is realistically done. I liked this book a lot and recommend it.

Read it in less than twenty-four hours

Published by Thriftbooks.com User , 16 years ago
When I finished Laurie Halse Anderson's Prom, I wanted everyone in my class to know just how good it was. I could have said, "dude, this book was awesome, dude," because an opinion is valid in direct relationship to how many dude's are included. I didn't say that though. Instead I asked them, "do you know how good this book was?" They looked at me, wondering if I was going to say dude or something. I answered my own question: "I started it yesterday at four o'clock and I'm done now. Less than twenty-four hours and I read the whole thing." I just kept myself from adding dude. Simply put, without any dudes involved, Prom is an excellent book that I did not want to stop reading for even a moment. Ashley is the "normal" girl at the heart of Prom and it's this idea of her being normal that most got me. In the book, normal is defined as not a high-flyer going to an Ivy League school and not a total loser. Ashley is not going to college, she's just barely passing school, but she's not dumb. She just isn't the school type. I know some of those high school students. I teach some of them. Ashley sounded real to me. I believed in her and felt as though I knew her. She was a real person. She could have been any number of the students I have known. And that was the theme for me, this idea of being normal and having the problems, triumphs, worries, wants, and needs of ordinary people. Ashley has a boyfriend who treats her badly, but she stays with him. She has detentions piling up, but she's not a bad kid. She doesn't want to go to the prom, but she allows herself to get roped into organizing most of it once one of her friends needs her help. Ashley is normal in that she is saddled with the conflicts that all of the normal students have to face. She has to deal with them as best she can. It's when it all becomes too much for her that I fall completely for Ashley. No, I'm not in love or anything. It's that she makes me believe in her and see myself in her. The moment occurs after she has worked so hard to organize the prom and then is told that she can't go. She leaves school, rides the city bus for hours, and then returns home. While doing laundry, she breaks the dryer. It's the last straw for her and in one long, frantic sentence that stretches over half a page, Anderson shows Ashley lose all control to the rage and frustration that is swallowing her. I've been there. The students I teach have been there. I'm sure that Laurie Halse Anderson has been there. It's real life and it's normal. What isn't normal is to read a book in a day. I read a lot, but it's unusual for me to stay with a book that closely and read so fast. I didn't want to stop. I didn't want to wait to see how it would come out. I wanted to watch it unfold as it happened. It was as though I were watching her life and I could no more pause that than I can stop my own life for breaks. See, I'm normal too, just like Ashley, just like everybody, maybe even just like you. Go get Prom. And whe
Copyright © 2020 Thriftbooks.com Terms of Use | Privacy Policy | Do Not Sell My Personal Information | Accessibility Statement
ThriftBooks® and the ThriftBooks® logo are registered trademarks of Thrift Books Global, LLC