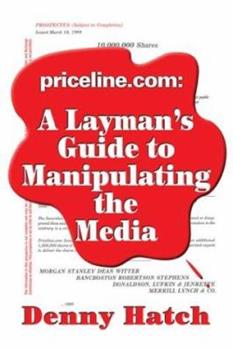 American business buccaneers at their most creative, outrageous! The riveting saga of the rise and fall of a $10 billion Internet travel business created entirely by masterful public relations. In 1999, a mesmerizing serial entrepreneur named Jay Walker, age 44, became the poster boy for the Internet revolution with his deeply flawed priceline.com, described by a former Walker associate as a '?travel services flea market.'? Denny Hatch's Priceline.com:...

Published by Thriftbooks.com User , 18 years ago
Priceline.com: A Layman's Guide To Manipulating The Media by Dennis Hatch is the true story of a dot com entrepreneur's rising business, which reflected the boom and bust of internet-based marketing when its stock (bolstered by a $252 million advertising campaign and the endorsement of William Shatner), peaked at a high of $165 a share before the awful truth was revealed -- priceline.com had never made a profit and lost more than $1 billion. Legions of small investors lost money when the stock was reduced to pennies on the dollar, yet priceline.com's officers, directors, warrant holders, and privileged associates had gained more than $3 billion in insider trades. A shocking, enthralling, and aptly researched tale of the extreme uses and abuses to which masterful marketing and business public relations can be put, Priceline.com is a scathing and documented indictment of the kind of corporate corruption that came to be associated with the excesses of Wall Street during the dot.com "wonder years".
Trustpilot
Copyright © 2022 Thriftbooks.com Terms of Use | Privacy Policy | Do Not Sell My Personal Information | Accessibility Statement
ThriftBooks® and the ThriftBooks® logo are registered trademarks of Thrift Books Global, LLC