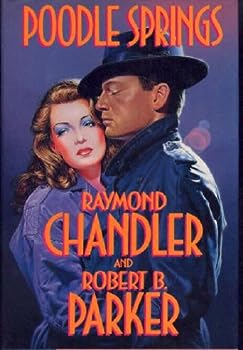 (Book #8 in the Philip Marlowe Series)

by Robert B. Parker and Raymond Chandler

This description may be from another edition of this product. When Raymond Chandler died in 1959, he left behind the first four chapters of a new Philip Marlowe thriller. Now three decades later, Robert B. Parker , the bestselling creator of the Spenser...

Published by plane , 1 year ago
Great book, if you have ever been to Palm Springs, you'll relate.

Published by Thriftbooks.com User , 11 years ago
If you like 'early' Parker works this is a 'must-read' for you! I have read all of his work and this ranks up with his best!

Published by Thriftbooks.com User , 13 years ago
Poodle Springs is Robert B. Parker's completion of a novel started by Raymond Chandler before he died in 1959 featuring private detective Philip Marlow. While I have read some of Chandler's previous novels featuring Marlow I have no emotional attachment to the character so I come with a blank slate in terms of evaluating whether Parker lives up to Chandler's character. Frankly I thought Parker did a fabulous job with the novel. It is a rather straightforward, gritty mystery, and a well done one at that. The tricky part is the unlikely event of Marlowe's being married to Linda Loring ne Potter (what her last name really is was a bit confusing to me, except she is now Mrs. Marlowe in this novel). In this novel Marlowe is living in the plush community of Poodle Springs with his very wealthy wife instead of his usual gritty haunts in Los Angeles. He is hired to find a man who has skipped out on a $100,000 IOU from an illegal gambling establishment. It turns out the fellow is leading a double life involving pornography and blackmail and has gotten himself way over is head. Marlowe, intrepid as ever, chases him down in a nicely twisted plot. While doing this Marlowe has to deal with his rich wife's unhappiness over his continuing to be a private eye when he could live a life of leisure and spend time with her. But that he can't do or he wouldn't be Philip Marlowe anymore. The story revolved more around the case than Marlowe's marriage to Linda but Parker does a great job of blending it in. Frankly, I think this is one of the better novels Parker has written. My only complaint about the novel is that we really never get to know Linda very well at all. Her mannerisms come off as a spoiled rich debutante but she is clearly not that. But we don't really ever know where she is coming from or get to know her. I suspect that Parker had plenty to work with to flesh out Marlowe's actions but had absolutely nothing to go on as to how Chandler envisioned developing Linda's character. So, my speculation is, in deference to Chandler he didn't try to flesh her character out too much but just left her pretty much like he found her. She comes off as a real swell gal. Overall, on pure enjoyment, I highly recommend it.

Published by Thriftbooks.com User , 17 years ago
Well, there's not too much to say about Poodle Springs without giving it away, but these two authors are a dinamic duo, to say the least! Poodle Springs was the best book I've ever read in my entire life. I loved the story so much that I couldn't put it down. I read all 400 something pages in one night! Take that Harry Potter!If you like suspence thrillers with just the right about of 50's mystery stories, complete with melodramatic love stories and dialog-over-action, then you'll love Poodle Springs. I definetly recomend it. Go out and buy one. Please.

Published by Thriftbooks.com User , 21 years ago
This is a novel mostly written by Robert Parker, drawing on four chapters started by Raymond Chandler at the end of his life. If you are looking for a great Marlowe story done just like the early ones, you will be disappointed. If you are glad to have one more chance to be with Marlowe, I think you will be pleased with the experience.The story is a natural for Parker, because it involves Marlowe getting married to a rich society woman on the spur of the moment. Having gotten together, they both realize that not all is right in this relationship. 'Can't live with him, can't live without him' could have been the title. The relationship raises a lot of the kinds of issues that Parker handles well in the Spenser stories between he and Susan. Marlowe keeps at his detective work, and we get to meet a whole cast of hard characters with wonderfully terse dialogue and understatement. Although not as tough as a Chandler, it is certainly tough in an appealing Parkerish way. Having grown up in Southern California in the 1950s, I could relate to the tale that Chandler/Parker have woven. It seemed to fit my memory of those times, and had a sort of smoky, boozy nostalgia attached to it. Give it a try. The first five chapters are only about 26 pages. You'll have a good sense whether or not you want to read more. I know I could not have possibly put it down at that point. I was hooked. Maybe you will be, too. I hope it will be irresistible for you as well.

Chandler would be proud.

Published by Thriftbooks.com User , 24 years ago
After years of reading and watching Spenser, I couldn't wait to sink my teeth in Marlowe by Robert Parker. While I was reading it, I was consiously watching for where one left off and the other began. I couldn't tell!! After reading this book, I started reading more Chandler books and still couldn't tell. It is a wonderful story that allows a great authors work to be continued. All I can say is that it is a fantastic read that I have re-read six times. Vive Marlowe
Copyright © 2020 Thriftbooks.com Terms of Use | Privacy Policy | Do Not Sell My Personal Information | Accessibility Statement
ThriftBooks® and the ThriftBooks® logo are registered trademarks of Thrift Books Global, LLC