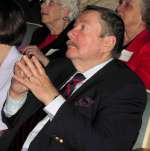 Robert B. Parker (b. September 17th, 1932 in Springfield, Massachusetts--d. January 18, 2010) was the bestselling author of nearly 70 books, most notably his detective novels about the fictional private eye Spenser. Parker won two Edgar Awards from the Mystery Writes of America, as well as the Grand Master Award Edgar for his life's work. Parker also penned Western novels and children's books, and served as a professor at Northeastern University.

Books by Robert B. Parker

God Save the Child

of 4
Copyright © 2020 Thriftbooks.com Terms of Use | Privacy Policy | Do Not Sell My Personal Information | Accessibility Statement
ThriftBooks® and the ThriftBooks® logo are registered trademarks of Thrift Books Global, LLC