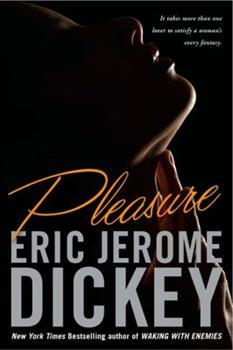 The bold new blockbuster from the New York Times bestselling author. Born in Trinidad and living in Atlanta after a relationship gone bad, Nia Simone Bijou is an ambitious writer who has it all. Except for the one thing that'll give her the control she craves-and the power she deserves: absolute, uninhibited sexual satisfaction. Now, in the sweltering days and nights of summer, the heat is on. Nia's fantasies will become a reality-with man after man...

Published by Thriftbooks.com User , 12 years ago
I received the book in the mail and it was in perfect condition. I was extremely pleased.

Published by Thriftbooks.com User , 13 years ago
I absolutely loved Pleasure! I was so disappointed when I finished because I wanted more! The characters were so dynamic. I hope to see more of them soon.

Published by Thriftbooks.com User , 13 years ago
Nia Simone Bijou is a successful Trinidadian writer who has everything that a woman could want. She is a recent L.A. transplant that has moved to Atlanta so that she can be as free as she wants to be without being under her successful Hollywood mother's shadow. But the one thing that Nia is searching for seems to be unobtainable: sexual pleasure. She's still trying move on from the break-up of her ex-boyfriend Logan, but he won't take no for an answer. Nia's thirst for pleasure is quenched when she meets not one, but two lovers named Mark and Karl. Soon Nia is swept into a world where all of her carnal desires are satisfied by both of these men. She enjoys Mark and Karl for different reasons and she can't pick just one. But when this love triangle spins out of control and borders on obsession, will Nia be brave enough to make the best decision for her life without sacrificing her own wants and needs? Pleasure is a seductively spicy novel by Eric Jerome Dickey. Dickey eloquently draws the reader into Nia's quest for sexual pleasure from the very first page. You will see the complexity of Nia's character as she battles with two sides of herself. There's the sensible side who knows that partaking in this kind of sexual behavior is risky. Then there's the more free-spirited side that says having these kinds of adventures is just what she needs. Fans of Dickey's previous work will still find his signature thought-provoking writing style in this story. But please remember that this novel is straight-up, in-your-face erotica. So if you're a diehard fan of EJD but not a fan of erotica, then this story will not be for you. The sex scenes are so steamy that you will find it hard to look away from the pages and may need to either drink a cold glass of water or take a cold shower to cool off. Dickey also flexed his creative muscle by telling this story in a female point of view and mixing in key elements of Karma Sutra and Anais Nin into this story. There is also a disturbing underlying theme of twisted obsession and competitiveness that will have you scratching your head. Pleasure is deliciously erotic and addictive. Eric Jerome Dickey once again proves that he has that golden touch, no matter what genre he writes in. Reviewed by Radiah Hubbert for Urban Reviews

Published by Thriftbooks.com User , 13 years ago
Well... Eric is back with his most erotic and emotionally driven novel yet. The eroticism and plot do a strange dance. Throughout most of this novel the sexuality/eroticism is the driving force while the actual plot takes a very close backseat. Fans of his will recognize this and it's a little "strange". What drew me to Eric was his Autobahn fast plot with really tastefully done sex scenes. In `Pleasure' it's more Autobahn fast sex/eroticism sex with a really tastefully done plot. `Genevieve' stands out because of shocking sexuality of the 1st chapter... the 1st chapter in this book will make that seem like Junie B. Jones! Nia is a flawed, educated, sexual, confused, talented, crazy, insatiable, women who is trying not to be so...well... flawed, confused, crazy, and insatiable! She is looking for pleasure and she finds it with 2 brothers (2 TWIN brothers)! Well... at first... 2 brothers! She takes it to a whole. Nuther. Le-val with other characters. Anais Nin's work is a strong influence in this book and Eric does a wonderful job of mixing their styles. This book doesn't have the classic "wtf" twists that makes Eric's books so good. No, this book has something different. That difference will depend on who reads the book. For me, this book was pure erotica. Pure meaning it permeates the story, your mind wanders on what you think will happen next, or rather what you WANT to happen next, Eric leaves absolutely nothing to the imagination, and makes you squirm. Nia will make you laugh especially when she continually irked by the grammar (or lack thereof) of her ex. Depending on what side of the tracks you're on you will feel sorry for Logan or you will want to murder him. Karl and Mark... I think they need therapy. I know the story was about Nia but what was up with those two? Seriously... what the heck happened to them to cause them to do some of the things that they did/do? It was good that they were there to give her some yoni-help but those two brothers need Jesus! I didn't really get Jewell or Kenya. Their parts in this story left me wanting. Also, Eric must have a GPS implanted in his head because the man takes you through a virtual map that almost scares you how accurate it is. His descriptions of the islands, the food, the weather, the storm that forces Jewell and Nia to spend time together, the relationship with her mother (wow), her feelings about Karl and Mark, her relationship with KiKi Sunshine, and everything else. This is where Eric shines and shine he does! I gave this book 5 stars because it really is VERY good, despite the absence of his trademark air-tight perfect plot. Oh, and one more thing... big ups to Mr. Dickey for having Karl drive a Jeep Wrangler! He didn't say whether or not it was a `Rubicon' but still made me happy! :-)

Published by Thriftbooks.com User , 13 years ago
PHEW!!! All I can say is that this story is, simply put, the hottest piece of work EJD has ever written! It smokes. From its inception, the story grabs you. As a writer, you can learn a great deal from his rhythm with words, his tight delivery via dialogue and limited use of first person, feminine, narrative. That he captures the unadulterated lust of his female protagonist is amazing. if you enjoyed THE OTHER WOMAN, fasten your seatbealts: THIS ONE, IN TERMS OF EROTICA, is way better. EJD shows that some men understand a woman's blend of sexual independence and confusion. Elevating the writing bar once more he incorporated sexual techinique by way of Kama Sutra, something I was saying for a long time needed to be done in Black Erotica. I loved Nia Simone Bijou, his female protagonist. Enjoying her erotic confusion, EJD and PLEASURE takes it to another level, leaving readers in awe of yet another unforgettable journey. Flammable is an understatement with this one. Excellent writing says it all. That MICHAEL JACKSON analogy had me rollin'!!! Great job!
Copyright © 2020 Thriftbooks.com Terms of Use | Privacy Policy | Do Not Sell My Personal Information | Accessibility Statement
ThriftBooks® and the ThriftBooks® logo are registered trademarks of Thrift Books Global, LLC