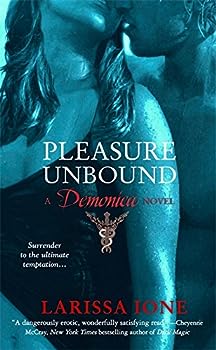 (Book #1 in the Demonica Series)

This description may be from another edition of this product. In this dark and intriguing paranormal romance from New York Times bestselling author Larissa Ione, a forbidden romance turns deadly when a slayer is tasked with killing the demon who saved her life....

Published by PirateQueen76 , 18 days ago
Larissa Ione Is A Wonderful Writer And I Look Forward To Finishing The Serious, Finally

Stellar Addition to the PNR Genre

Published by Thriftbooks.com User , 13 years ago
"Pleasure Unbound", is (IMHO) one of the best books of this genre to be published in 2008. Larissa has woven erotic romance, suspense, action and treachery into a great storyline in an original setting. The story is laced with dark wit and the action scenes are explosive. The book opens at "Underworld General", a hospital created for the treatment of demons and all manner of "ghoulies". It is here we meet the main protagonist of the book, "Eidolon", a charismatic (and I mean charismatic), demon physician who has endured many losses in an ongoing war with society of demon hunters and exterminators. Practicing medicine is Eidolon passion, however he is struggling to control dark impulses that are raging within him as part of a transitional phase inherent to his species. Enter "Tayla", a tormented demon hunter who "Eidolon" reluctantly saves from certain death, only to find that she alone awakens powerful desires within him. Tayla is a tough, determined highly trained demon exterminator that resists her strong attraction to Eidolon. The conflict and barriers between these two unlikely lovers seem insurmountable. However, the sensuality that erupts between them is volcanic, literally sizzling off the pages. There is a cast of well-developed supporting characters, introduced in the book woven into sub-plots that don't overtake the overall storyline but keep the entire read exhilarating and entertaining. If you enjoy a good dark erotic paranormal romance, "Pleasure Unbound" is well worth the money spent and the reading time. I am eagerly looking forward to the next books in the series. "Desire Unchained", will be available near the end of February 2009, and "Passion Unleashed", available at the end of March 2009. I have mine pre-ordered. Do you?

Explore the Dark Side...

Published by Thriftbooks.com User , 13 years ago
I almost passed this book up. I needed a book to take with me on vacation and I practically had all the other books there. Demons seem to be the newest focus of the paranormal books I've been reading lately. We have Tayla, a slayer or member of the Aegi, a group of humans devoted to killing all demons. She is often called Buffy, as in Buffy the Vampire Slayer. On the other side, demon doctor Eidolon, an incubus who is on the edge of transforming into a seducer of females. Due to injuries, Tayla is taken to a supernatural hospital where the staff debates killing or helping her. The story progresses with Tayla and Eidolon being drawn to each other. We discover through a few twists and turns that Tayla is destined to Eidolon's destroyer or savior. There are also some unexpected revelations about Tayla's origins, such as her paternity, a sister, and who she really is. While the story is not exactly unique, her take on the demon world, Lucifer, and Hell seems to be different. This demon world is kind of like the inverted idealized world of heaven, formed by Lucifer. We don't have all drop-dead gorgeous demons who may be very good or very evil. There are some very repulsive creatures in this demon world, but then again who is to say that humanity doesn't also have its share of monsters. Very hot romance and the first in a series. I didn't notice any typos and the plot was fairly tight (unlike LKH).

The first book in the enticing new Demonica series

Published by Thriftbooks.com User , 13 years ago
Tayla Mancuso was taught to believe that all demons are evil; there is no gray area. As an Aegi, she is sworn to protect humankind from these vile creatures and to dispatch them, no matter the cost. When Tayla wakes up in a demon hospital after a fight that costs her partner her life, she immediately begins scanning exits and remembering faces so that she can take the place down at the first opportunity. She doesn't expect to feel a healthy dose of attraction to her doctor, Eidolon, and she certainly doesn't expect him to start telling her things that make her question the entire foundation on which her beliefs are based. According to Eidolon, not all demons are evil, and in fact it's the Aegi who are exhibiting these qualities. He believes that her people are responsible for the deaths of a number of demons whose organs are being harvested, while the creatures are left to die. Initially believing that everything he says is a lie--who can trust a demon anyway?--Tayla eventually begins to question her beliefs. Would an evil, depraved race of beings help their sworn enemy when she was hurt in battle? But could the Aegi, a race sworn to protect, be responsible for the grisly deaths she sees as she explores Eidolon's truth? Eidolon is a doctor in a demon hospital who has sworn to heal and protect even the worst of his race. He is also a Seminus demon who is nearing his transition, a fact that doesn't bode well for the women around him. Seminus demons nearing the change will rut with anything in sight, long to spread their seed and impregnate every woman in their path, and will take a female by force if necessary. Eidolon fights the change on a daily basis, using his skills as a doctor to control his lust, so imagine his surprise when his passion surges to the forefront for a slayer who enters his hospital. Eidolon hates the Aegi and believes them responsible for his brother's death. There's no reason for him to feel any attraction to the little killer on his operating table, but despite that fact she makes his blood boil like no other woman has. And when he has her open on his table, he learns why--she's half-demon. Pleasure Unbound is the first in a new Demonica series from Larissa Ione, and this book and its characters are engaging, passionate, and hard to put down. I couldn't stop myself from reading it in one sitting, and I have a sneaking urge to read it again a second time already. Tayla isn't your typical romance heroine, in that she can take care of herself and she's got the battle scars to prove it. This is a girl raised in foster homes who was taken in by a society of slayers who were the first family she knew. She was trained to kill and raised to believe that demons are evil, so imagine her surprise when she learns she might be one of them. Her entire belief system is thrown into question when she learns her heritage, not to mention when she feels this startling attraction to an incubus. And Eidolon is a man who puts family first. His b

Dark, Steamy, Suspenseful and Original start to a new Demon Series -- Don't miss this one!

Published by Thriftbooks.com User , 13 years ago
To kill or to kiss? Dark and sensual Demon Eidolon, shakes sworn demon slayer Tayla's comfortable black/white world view -- Tayla 'knows' Demons are evil and slaying them to keep humanity safe is a noble cause. When Eidolon treats the critically injured slayer, Tayla is shocked to find that a Demon doctor, and a gorgeous one at that, seems so normal. Eidolon should disgust her. He's her sworn enemy, a member of the vile race that raped and killed her mother. But when Eidolon's near it doesn't matter that he's a Demon and should be purged from the Earth, the only thing that matters is the powerful desire he inspires in her and the promise of the fulfilment that only Eidolon may be able to provide. The setup for the leading man Eidolon was great. Despite a ruthless streak he embraces a sense of fairness and rigid code that makes him extremely honorable for a Demon. But Eidolon is an incubus on the brink of a final sexual maturation that will prevent him from continuing the healing role in that has defined his life for the past eighty years -- a transformation that will turn him into a rapacious sex fiend driven to impregnate any fertile demoness and that will make him feared and reviled among Demons. And if loss of the prized control that leads to his uncontrollable desire to sleep with the enemy isn't enough of a problem, Demons are turning up maimed and dying at Eidolon's hospital Underworld General (yeah that's UGH) apparently the work of slayers harvesting organs destined for the black market from the awake and still living Demons. There was so much that I liked about this book. If you are familiar with Larissa Ione's Storm series, which she cowrites as Sydney Croft, you'll recognize the excellent story telling. But Pleasure Unbound, even with an incubus leading man, avoids the over the top eroticism of the Storm books while still delivering a smoking hot romance. Ione textures the dark background plot - in case you wondered the brutalization of the Demons is off screen we just see the aftermath -- using nuances that make the Demons and their world just enough different to stand apart from ours and Ione fills the world with an intriguing supporting cast. Most notably, Eidolon's brothers who are also incubus (incubi?), each with their own impressive talents and each with problems: Shade with some mysterious curse and Wrath with his tortured past. Also great is Gem, a demon intern working in a human hospital passing for human while hiding her hopeless love for a married human. Hope she gets a book of her own or at least a major substory thread in the brothers' books. Ione has at least two more books in the works Shadow Lover(Shade's) and Eternity Embraced both out Spring of 2009. Checkout the excerpts for Pleasure Unbound and Shadow Lover on Ione's website.
Copyright © 2020 Thriftbooks.com Terms of Use | Privacy Policy | Do Not Sell My Personal Information | Accessibility Statement
ThriftBooks® and the ThriftBooks® logo are registered trademarks of Thrift Books Global, LLC