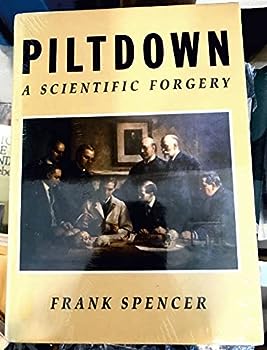 On the night of December 18, 1912, a packed meeting of the Geological Society of London listened to Charles Dawson, a rural lawyer and an amateur geologist, make an exciting announcement: he had found evolution's missing link in an old gravel pit near Piltdown Common. Together with Arthur Smith Woodward, Keeper of Geology at the British Museum and a noted authority on prehistoric archaeology, Dawson had discovered the shattered remnants of a thick,...

Published by Thriftbooks.com User , 15 years ago
In 1912, Cahrles Dawson and Arthur Smith Woodward "discovered" what was then claimed to be the missing link in human evolution at site known as Piltdown. What follows represents the unravelling of one of the greatest scientific forgery the world had ever seen. Spencer's work represents first the challenge to explain how Piltdown Man (eoanthropos dawsoni) came to be regarded as the missing link in human evolution. Then, the challenge came to be how the scientific community held onto Piltdown Man despite the conflicting scientific evidence found in other parts of the globe. Finally, how the investigation of Weiner, Le Gros Clark and Oakley in 1953 exposed the fact that Piltdown Man was an elaborate and meticulous fraud. From there, Spencer then explores the suspects and possible motives of the suspects of this most elaborate forgery. Spencer runs the gamut of suspects before indicating his belief in the collaborative efforts of Charles Dawson and Arthur Kent. Like any good detective, Spencer employs the requirement that the perpetrator(s) of this fraud must have had both motive and opportunity. Unfortunately we will likely never know the true identities of the perpetrators. In the end, the invesitgation in 1953 revealed that the Piltdown skull was nothing more than a human skull and an unrelated lower jawbone of an ape. The fact that in 1912, this discovery was heralded in the scientific community as the missing link reflects both on the sophistication of the forgeries and the desire by many to have the mssing link be found in England. Spencer explains all with great scientific detail coupled with a touch of panache. All in all, highly enjoyable.
Trustpilot
Copyright © 2022 Thriftbooks.com Terms of Use | Privacy Policy | Do Not Sell My Personal Information | Accessibility Statement
ThriftBooks® and the ThriftBooks® logo are registered trademarks of Thrift Books Global, LLC