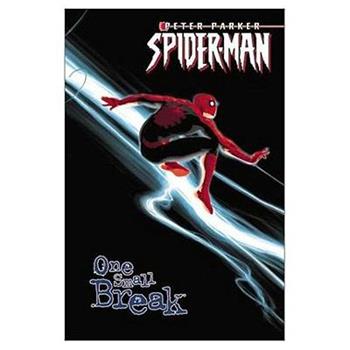 cover by mark buckingham THE SCOOP: The critically-acclaimed team of Paul Jenkins and Mark Buckingham present some of the most touching Spider-Man stories in years in this beautiful collection! THE... This description may be from another edition of this product.

A series of unfortunate encounters for Spider-Man in 2001

Published by Thriftbooks.com User , 17 years ago
"Peter Parker: Spider-Man, Volume 2: One Small Break" is a trade paperback collection which brings together issues #27-28, and #30-34 of the second volume of the second Spider-Man comic book (which was replaced by "The Spectacular Spider-Man" a couple of years ago). These stories were written by Paul Jenkins, penciled by Mark Buckingham, and inked by Dan Green (Rodney Ramos) and Wayne Faucher. Issue #29 sets up "The Amazing Spider-Man Annual" from 2001, which is why it is skipped in this collection. Clearly in the new Marvel universe this is becoming standard operating procedure, to reprint relatively recent collections in trade paperback volumes. It certainly makes old issues a lot easier to read if you do not have to take them out of your plastic bags to read them again. All of these stories take place when Peter and Mary Jane were separated. In issues #27-28 Spider-Man is contacted in a series of strange ways by his old enemy Professor Mendel Stromm, the Robot Master (who originally appeared in #37 of Volume 1 of "The Amazing Spider-Man" back in the Lee & Ditko era). When Spider-Man comes "face to face" with his old foe, he finds that Stromm is a disembodied head being kept alive by a machine that he created. Stromm wants Spider-Man to have mercy on him, and kill him. This becomes a rather different sort of dilemma for Spider-Man to face, and his decision is not made any easier by talking to Aunt May, who tells Peter a story about her Uncle Horace. The next three issues (#30-32) have to do with Fusion, a super villain who goes beyond what the Super Skrull did with the Fantastic Four or the Mimic with the X-Men. Fusion is, by his own definition, "an amalgam of every hero and criminal in this city," which means he can have Doctor Octopus' mechanical arms one minute and Captain America's shield to go along with Wolverine's claws the next. He can also hit like the Thing or make the cops think he is Spider-Man holding a hostage, all for the purpose of eliminating Spider-Man. Fusion detonates a bomb that kills 300 people and Spider-Man still does not know why Fusion wants to see him dead. Then Fusion challenges Spider-Man to a rematch and things go even worse for the web head. But there is one thing to be said for a broken neck: it gives you a moment of clarity. "Maybe Next Year" (#33) is a nice little change of pace story in which Peter recalls how Uncle Ben used to take him to Mets games. This was back when the Mets used to lose a lot, but as you probably suspect when you are talking Uncle Ben and baseball, there was a lesson here to be taught and for Peter to remember. "If Thine Eyes Offend Thee..." (#34) has Peter agreeing to go to the Fair with Caryn, the woman across the hall. There he runs into William, who was left at a monastery as a child. As long as he lay on his back William could open his eyes with no effect, but if he is standing or upright incredible bursts of energy go shooting out of his eyes. Well, William is walking around

This book is very good-Fusion rocks!

Published by Thriftbooks.com User , 19 years ago
While many people have been dissing Mr. Jenkins in favor of the current "Amazing Spider-Man" team, he actually presents a very good collection of stories. His tale on assisted suicide makes you think, and the baseball story was touchy. I for one also enjoyed the William story, due to it's inspiring ending. However, the highlight of the book is the Fusion saga- Fusion, an cool-looking villian, has a very personal gripe with Spidey, even though they've never met. What's this guy's major malfunction, and why is it driving him to kill hundreds? You'll have to read the book to find out!
Trustpilot
Copyright © 2022 Thriftbooks.com Terms of Use | Privacy Policy | Do Not Sell My Personal Information | Accessibility Statement
ThriftBooks® and the ThriftBooks® logo are registered trademarks of Thrift Books Global, LLC