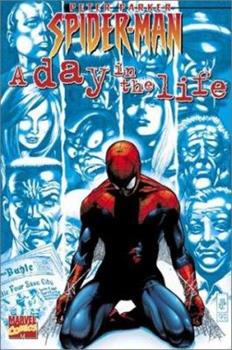 Peter Parker Spider-Man Vol. 1: A Day in the Life

Reexamining his life and role as a costumed crime-fighter. Peter Parker comes to grips with a great personal loss, explores his friendship with the Human Torch and faces a deteriorating Sandman.

Published by Thriftbooks.com User , 19 years ago
More than any current writer, Paul Jenkins understands the character of Spider-Man, well-proved here in his earliest Spidey tales.

A MUST READ for any current or old Spidey Fans!!!!!

Published by Thriftbooks.com User , 19 years ago
I used to love Spider-Man--and for the same reasons that everyone else did. He was fun, daring, brave and most of all, human. He failed at times, he had doubts--he was just like us. But somewhere along that way, the character changed. I lost that connection that I once felt for Peter Parker and it never seemed to return. Up until ULTIMATE SPIDER-MAN was released, I hadn't read a Spidey comic since he was flying around as Captain Universe (I remember the days fondly when the true identity of the Hobgoblin was a predominate concern). But for some reason, the other current Spidey titles didn't seem to interest me.But that changed with the release of PETER PARKER: SPIDER-MAN: A DAY IN THE LIFE. Written by Paul Jenkins, this collection of two separate Spidey series (WEBSPINNERS: TALES OF SPIDER-MAN #10-12 and PETER PARKER: SPIDER-MAN Vol. 2, #20-22 & 26) has rekindled that interest. With the same contemplative and insightful style that made his take on THE INHUMANS such a compelling read, Jenkins manages to inject poignancy and humor into this classic character again. We see the personal struggles that have weighed heavily on Peter's conscience. We relive the tragedies that besieged his life and the events (and the people) that shaped it. And best yet, we see him persevere and continue fighting the good fight. If you like Spider-Man and would like to maintain a sense of history, especially in the wake of the "Ultimate" Spidey reboot and the film, or just want to read one of the best Spidey stories in years, I strongly suggest you pick up this TPB (trade paperback). And I'm not saying that you should disregard ULTIMATE SPIDER-MAN--you shouldn't. It's a great series, too. What I am saying is that this collection is one of THE definite Spidey stories that I've read, and a great way to get back into a character that had seemingly lost his way. Check it out!

Published by Thriftbooks.com User , 20 years ago
Paul Jenkins does a great script job in these comics! It's smart, funny and it gives you a great idea of what the man behind the mask is really like.

Peter Parker: The Man Behind the Mask...

Published by Thriftbooks.com User , 20 years ago
What makes Spider-Man a fascinating character is not his great powers, but the man behind the mask, Peter Parker. Spidey has enjoyed tremendous success ever since his conception nearly 40 years ago. Throughout all this time, the most unique thing about him was not the colorful suit he wears while swinging, but the simple average, all-so human Peter Parker. Stan Lee, his creator, knew that a long time ago and what better way to bring this character to life but through mastery of one of the hottest British writers of all time, Paul Jenkins.Jenkins became a household name with his unbelievable work on the INHUMANS, but it is here in his take on Spidey that he truly does shine. His characterization is par none, he takes you on a trip into the Spider-Man saga and fills in points of history, with original art of that time, but never truly changes anything for the old reader. He makes things come to life with his words. The take on going back and forth in the past sure does display his powers as a writer. This is a man that was set to write any hero and make him out to be more human than the people you see walking the street everyday while going to work.The whole story delves completely on Peter Parker and how his life as Spider-Man has come to be in the recent years. This is a man who has been through much and still persevered to tell the tale. He is your average guy who you might bump into while playing softball in the park or the guy next to you in the movie theater. He is a living, breathing human being and not a comic book character. At times, a person might think that he's probably too human with all his flaws and gestures. The TPB starts off with how the Chameleon, one of Spidey's first foes views him. This trip goes without saying is an in-depth look at Spidey and Peter Parker that has never been explored before. This culminates in Chapter 3 where Spidey is defined as the true character he really is. The following 4 chapters take you on a ride of how Spidey came to be through the eyes of Peter Parker. Flashbacks on his life as a child help create the man he is now and the hero he then later becomes. Jenkins takes you all the way, with a day in the life. The witty humor and the pretenses don't leave you laughing out loud, but keep giving you that smile that you carry on throughout the story. Anyone could be Spider-Man given the right circumstances, but it is only Peter Parker that makes the character who he really is. You feel the loneliness that he feels and the sadness that he carries each day with him. The loss of his loved ones, his uncle and his wife. You just learn that no matter, to be who you are, you have to learn how to laugh. In the end, that's what helps us being ourselves. That's what makes us appreciate our life for what it is. This is a smart piece of fiction, superbly written by Jenkins and drawn by the industry's top artists.Spider-Man is a comic character, but Peter Parker is a real man in all sense of the word.
Trustpilot
Copyright © 2022 Thriftbooks.com Terms of Use | Privacy Policy | Do Not Sell My Personal Information | Accessibility Statement
ThriftBooks® and the ThriftBooks® logo are registered trademarks of Thrift Books Global, LLC