Published by Adria , 1 year ago
The book is as always a fantastic read. Jane Austen is one of my favorite authors. The quality is amazing, like new.

Published by Kitty , 2 years ago
I have read just about all of Jane Austen’s works, and this is definitely a good one! It’s not my favorite - Sense and Sensibility, Pride and Prejudice, and Emma were better structured - but if you love Ms. Austen, you must include this on your reading list.

Not to be confused with a different B & N edition, this edition is sturdy and has added features.

Published by Thriftbooks.com User , 13 years ago
Frankly I am puzzled by the criticisms leveled at this edition. There is another edition [also by Barnes and Noble] and it is cheaper, though the quality is very flimsy and I wonder if the other reviewers were confused with that edition? This edition of Persuasion is beautifully bound, with a cloth spine, and has a lovely portrait on the cover. The text is not too small unlike some other editions, it makes for comfortable reading. The book itself is sturdy, as it is in hardback, but not unwieldy - it fits nicely into my hands. Besides the main text of Austen's novel itself, it has added features - a brief chronology of the world of Jane Austen & Persuasion, an introduction, the main text, as well as useful endnotes, works inspired by Persuasion,comments, as well as a list of resources for further reading and criticisms. In all, a value buy.

Published by Thriftbooks.com User , 13 years ago
Persuasion is Jane Austen's most sophisticated story and writing. She lovingly and incisively demonstrates the problems of being a well-bred sensitive person in a society that's more intrigued by social standing, money, and polite conversation than by good character. Persuasion is Anne Elliot's story. The title's initial allusion is to Anne's brush with matrimony when a promising, but not rich, naval officer, Captain Wentworth, proposed and she fell in love with him at 19. But Anne's deceased mother's friend, Lady Russell, persuaded Anne not to make the match. Up until the time of the story, Anne hasn't had another suitor and she's now well past the usual age of marriage at 29 and "her bloom had vanish early." Her father's spendthrift ways mean that Anne could bring little money to a marriage so she's expecting not to marry. While in her social class that lack of a husband is a drawback, in reality her family is a greater problem. Her father, Sir Walter Elliot, is a baronet who spends too much money, is obsessed by social rank, loves to be around the "beautiful people" and admire himself in a mirror, and keeps company with an unsuitable, scheming widow, Mrs. Clay, who is looking for a husband and has latched onto Elizabeth as friend. Anne's older sister, Elizabeth, is also unmarried and is as equally obsessed with social status as their father. Both Sir Walter and Elizabeth fail to value Anne and looked to her to suit their conveniences. The other daughter, Mary, is married but the connection doesn't thrill either Sir Walter or Elizabeth. Mary sees Anne as a virtual servant who should wait on her every beck and call when Anne is her guest. Due to Sir Walter's over spending of his income, it is decided he will rent the family estate, Kellynch Hall, while he, Elizabeth, and Anne take up less expensive quarters and a reduced social life in Bath. This change sets lots of new events into motion, not the least of which is Anne being re-introduced to Captain Wentworth who now has a fortune and seems to be looking for a lively, young wife. Only their common commitment to being polite makes time in one another's company tolerable. What strong emotions burn under the surface? She's very embarrassed, but Captain Wentworth is hard to read. In the course of the book, you'll find out a lot about social climbing in Regency England, the finances of the social elites and those who were up-and-coming, how marriage agreements were struck, and how the naval officers differed from the gentry. You'll also be impressed, I'm sure, by the patina of politeness that served as a social lubricant among people who often didn't care a trifle for one another. In such a society, people mostly wore masks of being thoughtful, considerate people while in reality they were seldom thinking about very much and didn't care much for others. Anne Elliot is the exception in that her heart and mind are actually devoted to the service of others. One of the most interesting parts of th

Published by Thriftbooks.com User , 13 years ago
This book and Pride and Prejudice are wonderful and well-written stories that both my husband and I enjoyed and love very much. Someone said that the paper quality is poor, but its not at all. This book and the other Jane Austen books in the Barnes and Noble series are of high quality.

Published by Thriftbooks.com User , 15 years ago
PERSUASION, the last novel that Jane Austen completed before her death in 1818, tells the story of one Anne Elliot, the second daughter of a baronet who has spent his waythrough his fortune and has nothing but his title to lean on. When she was 21 years old, Anne fell in love with and was engaged to Frederick Wentworth, a young captain in the Navy. Her belated mother's best friend, Lady Russell, dissapproves of the match as being below Anne, due to Anne's claim to nobility, and Anne cancels the engagement, much to her and and Captain Wentworth's grief. Nearly eight year's have passed since she broke off her engagement to Captain Wentworth when she, Lady Russell, and a Mr. Shepherd, a friend of her father's, are forced to pose and intervention and tell her father that he must quit his estate and find someone to lease it to, or he will be sent tot he poorhouse. Her father, his only pride being in his social position and personal appearance, relents, but only if they can find suitable tenants - which they do in Admiral Croft and his wife, the sister of Captain Wentworth. Anne thinks that her broken heart has mended, until she sees him again. unfortunately, he is now attached to another . . . and yet Anne sees clues in his behavior that he may be hers once again. Anne and Wentworth must negotiate their past, their different social classes, and proper behavior to find their way back to one another. What sets PERSUASION appart from Austens' other novels is how modern it seems in comparison. Austen takes more liberty with point of view in this novel, the characters have much richer inner lives than the Bennet's or Dashwood's ever did. This novel is highly recommended to anyone who would enjoy Jane Austen. Though the ending is predictable, it does not always seem so, and therefore the novel was a very suspenseful read.

Published by Thriftbooks.com User , 21 years ago
I know a lot of teens who, when I tell them I am reading Jane Austen, say, "What are you thinking?" because they have read Sense and Sensibility first, before trying any of her easier works. Persuasion is the easiest book of Austen's to get into, to follow, and to love. She makes the characters real by explaining them in many situations. When I read this book, I instantly became friends with Anne Elliot, the family outcast, because she was an outcast. Then she became even more my friend when she became the beloved and desired friend and love of Captain Wentworth. I loved seeing Anne go through the difficulties of dealing with her past actions, and instead of wanting to go back and change the past, she wanted to go forward and decide the future. Austen masterfully portrays all of her characters, and I would love to go to Lyme and see where Anne met her cousin, and to Bath to see where she and Captain Wentworth decided their future together. Persuasion is my favorite book of Austen's, and if you read it, it will be yours, too.

Persuasion Mentions in Our Blog 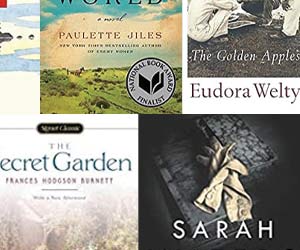 There's a lot of uncertainty in our world right now and it leaves many of us feeling anxious and unsettled. Of course, books can help! Reading is a tried and true source of solace in times of trouble. Here, ten contemporary authors share the books that bring them comfort.