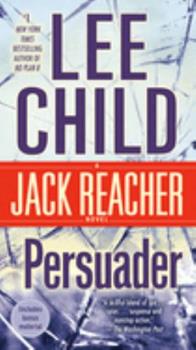 "Gripping and suspenseful . . . Child ratchets up the suspense to new heights."-- The Denver Post Jack Reacher lives for the moment. Without a home. Without commitment. And with a burning desire to right wrongs--and rewrite his own agonizing past. DEA Susan Duffy is living for the future, knowing that she has made a terrible mistake by putting one of her own female agents into a death trap within a heavily guarded Maine mansion. Staging a brilliant...

If Lee Child did not write this book I will not read it either.

Published by Jean , 6 months ago
Another person who read the book said that Lee Child did not write it. I believe he/she. Jack Reacher did not wear a watch. I have read, so far, six books by Lee Child, all of which were terrific. I had no doubt that he wrote them. Once you start reading the way an author writes you get used to their ways. Another author, James Patterson, sorry to say, eventually, after reading some of them you just knew it was not him that was writing them. I just hope that Lee Child will continue to write his own books. He is a terrific writer and I do mean "terrific". It got so you knew Jack Reacher personally and knew his ways. So, enough said, I will not buy the "Persuader". Sorry about that!!

Published by Mark G , 10 months ago
After watching the Reacher movie on TV, I started reading his books. Totally fast paced and exciting and in the grand tradition of thrillers; Suspension of dis-belief, a must. The fast paced beginning was classic Reacher but his nonchalance toward killing a cop led me to believe that the scene was a set up. Which turned out to be so. But what followed was not the Reacher I've come to know and love. I'm used to devouring these books like bowls of popcorn but this one dragged along, going back and forth in time and never getting straight to the point. His preoccupation with the females he was working with was unprofessional and unlike Reacher, who is the consummate professional. My belief that this wasn't written by Child was confirmed when, toward the end, Jack looked at his watch. Jack doesn't wear a watch! His mind always knows what time it is within seconds of Zulu. He can even reset it to compensate for time zones or DST. So whoever wrote this; Nice try. But you're no Lee Child.

Published by GrandmaE , 2 years ago
Would love to write a review if I had received the book

One of Lee Child’s best

Published by Patrick Granahan , 2 years ago
The story seemed a bit long....his use of flash backs back 10 years added to the length of this complex plot....flash backs could have been reduced by half......that aside the complex plot was far too heavily laced with violence even for a “Reacher” yarn.....but still worth 4 stars.

Violence as an Art Form

Published by Thriftbooks.com User , 17 years ago
Former Military Police officer Jack Reacher is back for a seventh time in "Persuader", the latest from talented thrill writer Lee Child. While walking down the streets of Boston, Reacher bumps into a "ghost" from his past - Quinn - a man who Reacher thought he had killed a decade prior. Through a license plate, Reacher traces Quinn to Zachary Beck, a suspected heavy in the drug trade. Reacher teams up with DEA agent Susan Duffy, who is heading an "off-the-books" sting of Beck in an attempt to free one of Duffy's agents who had infiltrated Beck's operation, but was found-out. In concert with the DEA, a kidnapping of Beck's college-student son Richard is staged. Reacher plays the "hero", rescuing Richard and, in the events that follow, gets inside the reclusive Beck's illicit business. Reacher gains Beck's trust and, through a couple of convenient "accidents", is given a security job to fill the unplanned vacancies. Woven through the story through a series of flashbacks is the tale of the sadistic Quinn, gradually unveiling the root of Reacher's vengeance. Child writes with razor sharp efficiency and clarity: a tight plot with no pretense of embellishment beyond the requisite violence and mayhem. Child's Reacher is the ultimate stoic loaner - Clint Eastwood's "man without a name" in a modern setting where the villains are meaner and the guns a lot bigger. Child writes with a clear and unambiguous sense of right and wrong, of good and evil. And while Reacher runs no risk on canonization, the bad guys are so devoid of any redeeming social value that the contrast is crystal clear. "Persuader" is high adrenalin fiction without excuse: blunt, brutal, and suspenseful: a true page-turner and the ultimate summer read.

Published by Thriftbooks.com User , 17 years ago
I read one of Lee Child's books and was so struck with his character, Jack Reacher, and the lean, elegant style of Child's writing that I read all seven novels nonstop. Since this is his newest novel, it might be the first one you find, but I believe you will enjoy the series more if you track down the first volume, "Killing Floor," and then read each of the seven in succession.In "Persuader," Jack Reacher has the jolting discovery of evil nemesis Ouinn's existence, whom Reacher thought he had eliminated a decade ago. To be ultimately rid of Quinn, Reacher faces a dual challenge -- penetrate an organized crime operation and aid the Federal government in the rescue of one of its agents.Reacher's engaging narration is a combination of strategic thinking and forceful explosion, which is a brilliant juxtaposition. Jack Reacher is a loner, without fear, and without surrender - and his intense drive will lead him to settle the score.Tension, mayhem, and action are propelled throughout Child's novels. This is definitely among the finest adventure fiction being written in America today.

Some people wait for the next Harry Potter

Published by Thriftbooks.com User , 18 years ago
Some people wait for the next Harry Potter, devouring it the moment it appears and then waiting, impatiently, for the next. I wait for the next Jack Reacher. Lee Child does so many things well that I would need many more words than the 1,000 permitted to do them justice, but suffice to say that he is the absolute master of tension and suspense (with or without car chases), he has one of the most interesting protagonists currently in the game, he has a better knowledge of ordnance than Q and he has a highly skilled sense of place, particularly for an Englishman from Cumbria concentrating on the nooks and crannies of gothic, backroads America.PERSUADER finds Jack in a chance encounter with an old enemy. The thrust of the novel then becomes the neutralizing of this enemy through a relationship with an intermediary. Child quick-cuts between the horror of the past and the impending justice of the present, so that we travel two roads, the first appalling in its evil, the second delicious in its payback. The timing is perfect, the execution precise.I wouldn't rank one of Child's books above the others because they are all uniformly strong. He had it right from the beginning and he never disappoints.

BUY IT; READ IT

Published by Thriftbooks.com User , 18 years ago
The best thing about the last page of Persuader is knowing that Lee Child is working on another Jack Reacher story. Reacher continues to be the bigger than life hero who appears out of nowhere in his never ending travels, and heads off onto a new highway leading to a new adventure at the end of each breath taking suspense filled story. Persuader, the seventh book in the series, is the best yet.Jack Reacher is ex-military, commited to right as he sees it and always a defender of the wronged. He has no address, no luggage, and always manages to find a change of clothes when necessary. He can fight, swim, shoot, use a knife, and generally defend himself any way he needs to at the time. He can break a bad guy's neck and walk on to the next room without looking back. In Persuader, the reader is brought right into the middle of a kidnapping attempt that ends up with Jack Reacher (who else) rescuing the kid being kidnapped and inadvertently killing a cop. Killing a cop seems like a bit much even for Reacher to cope with, but the story soon evolves and we quickly realize that the kidnapping was a staged senario designed to get Reacher on the inside with an organized crime family...not the usual organized crime, however, and the suspense continues to escalate throughout the book. The Persuader is thrilling, suspenseful and a book that can't be put down without a lot of reluctance until the last page is read.
Copyright © 2020 Thriftbooks.com Terms of Use | Privacy Policy | Do Not Sell My Personal Information | Accessibility Statement
ThriftBooks® and the ThriftBooks® logo are registered trademarks of Thrift Books Global, LLC