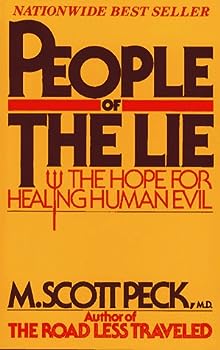 People of the Lie: The Hope for Healing Human Evil

The Truth Shall Set You Free

Published by Thriftbooks.com User , 15 years ago
In The People of the Lie, Dr. Peck taps into human evil. He presents case studies of his own and shares with us in depth of their evil, depression, madness, and narcissism. In the case of Bobby, a depressed fifteen-year-old boy, he had a brother who committed suicide with a rifle. His parents gave him his brother's suicide weapon as a Christmas present: this was an act of evil. Bobby was a victim of his parent's evil. According to Dr. Peck, people who attack others instead of facing their fears and failures are, in fact, evil. I believe this to be true. People who abuse others through the act of child abuse, rape, spousal abuse, emotional and verbal abuse, mental abuse, and physical abuse amongst other human abuse - the abusers are evil. They are emotionally weak and unable to face their own misery, weaknesses, and imperfections, and in turn, they make others suffer. They are indulged in their own selfishness, self-deluding denial that causes harm to others. Their immoral and destructive behavior rots away at the core of every person who walks in their path. As Peck reminds us, "Evil was defined as the use of power to destroy the spiritual growth of others for the purpose of defending and preserving the integrity of our own sick selves." As he states, "It is scapegoating." Evil people are vicious because they are trying to destroy evil, but end up damaging others. Instead of destroying others they should be destroying the sickness that lies within themselves (paraphrased). The title of this book is People of the Lie. Dr. Peck believes that lying is evil. At first, I was skeptical about this, but once I finished the book, I now understand his reasoning. Dr. Peck believes that wherever there is evil, there's a lie around. He states in his book, "The words 'image,' 'appearance,' and 'outwardly,' are crucial to understanding the morality of evil. While they seem to lack any motivation to be good, they intensely desire to appear good. Their 'goodness' is all on a level of pretense. It is, in effect, a lie. This is why they are the 'people of the lie.'" One area in the book that I am debatable about is that Peck mentions that the healing of evil can be accomplished by the love of individuals. This may be true between a parent and a child, but the one thing that I learned in life is that we cannot change others. If we are in abusive relationships, the abuser drains us both spiritually and emotionally. I truly believe, in my opinion that it is not our job to change others, but it is their job to change themselves. However, on the other hand, Peck contradicts himself by saying that we need to avoid people of such nature that drags others into their vicious games. How then can we heal evil through love if we are suppose to avoid them? The one thing that Dr. Peck points out is that we have the freedom of choice. To choose how we want to be treated, how we want to live our lives, and how we want to treat others. We have the freedom to heal and we hav

Published by Thriftbooks.com User , 16 years ago
If you have ever experienced or been frustrated by people who seem to have a hidden agenda then you will enjoy and benefit from this book. The author states (some are paraphrased) and explains the following: 1. The evil hide their motives with lies. 2. Evil people want to appear to be good. 3. When confronted by evil, the wisest and most secure adult will usually experience confusion. 4. Evil seeks to discourage others to think for themselves (fosters dependency). 5. To oppose evil we must have an ongoing dedication to reality at all cost. I agree that to be mentally healthy we must believe what is true and only what is true. After reading this book you will be better equipped to deal with people who cause strife and confusion. It will also help you identify thought patterns where you are lying to yourself.

Illumination the 2nd Time Around

Published by Thriftbooks.com User , 18 years ago
I remember picking this book up about 5 years ago and scanning through the first couple of chapters thinking to myself, "What is this guy talking about? I can't even fathom people that act like this." It just didn't ring true because my experience had not seen the likes of what he was trying to explain.Fast forward 5 years later, and after going through a harrowing job experience with two people who could star in a movie representation of this book (which, come to think of it, has already been done in a film called SWIMMING WITH SHARKS in the character played by Kevin Spacey), I read it through in a single sitting. Peck so accurately diagnoses the "people of the lie" as being so self-absorbed and narcisistic that they continually make excuses about the abuse they heap upon other people, somehow turning every story 180 degrees in the opposite direction and always claiming victimization when the situation so clearly points to them as the perpetrator. It is a sad indictment of what must be a pandemic within institutions, as these folks clamor and cling to power, money and title oblivious to the human carnage left in the wake of their passing. But even still, where our hearts are naturally inclined toward revenge, Peck cautions us, coaxing us toward pity for these wretched creatures. He suggests that whatever vile hellaciousness we could dream up as pay back should be tempered with the notion that these folks have consigned themselves to live in a hell of their own making (kind of like Annabella Sciorra in the movie, WHAT DREAMS MAY COME). The dark night of the soul sees their hearts scream out, "I hate you, you're nothing" when the worst some of us deal with is, "Ack... dumb mistake... oh well... keep going." Bravo... this book rings true, even if it took a second reading. Context is everything!

This book helped me deal with an evil "person of the lie."

Published by Thriftbooks.com User , 21 years ago
This is not a self-help book for those who ARE the "People of the Lie!" These people do not self-examine. They believe the lie, that only their desires are valid. There is no common ground on which to stand. This book can help those who have to live with them or work with them. The confusion that Dr. Peck felt while dealing with his patients is nothing compared to the disconcertion that a lay person feels. At least the doctor knew they were ill! This book helped me deal with an evil boss until I retired. I agree with Dr. Peck's advice: Get away from them, as fast as you can! In the meantime, read this book so you will know that it's not you who is sick, but them.
Trustpilot
Copyright © 2022 Thriftbooks.com Terms of Use | Privacy Policy | Do Not Sell My Personal Information | Accessibility Statement
ThriftBooks® and the ThriftBooks® logo are registered trademarks of Thrift Books Global, LLC